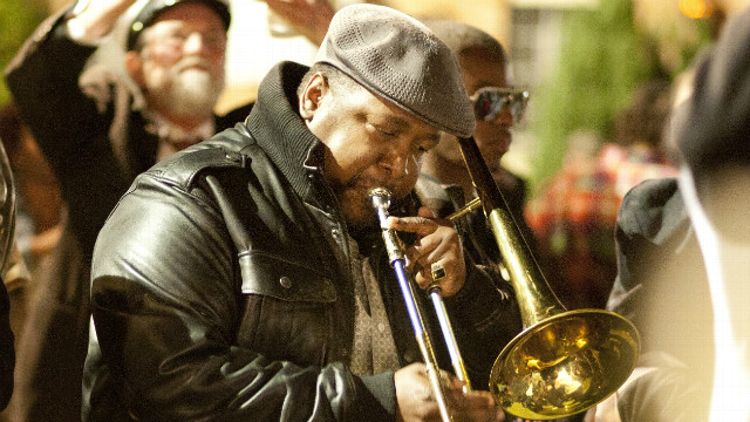 “Anyone with complaints about music in Treme? They in the wrong place altogether.” That’s not a quote from executive producer David Simon directed toward the rumbling second line of critics and naysayers who have high-stepped forward to wrinkle their brows and shake their heads at the inherent unlovableness of his post-Wire project. But boy, it sure could be. Instead, it’s a quip uttered with genial exasperation by Wendell Pierce’s trombone-blowing Antoine Baptiste in Treme’s third season premiere, airing this Sunday at 10 p.m. EST on HBO. Either way, the message is received loud and clear: Les bons temps aren’t stopping; either roll along or get out of the way.

More than 20 hours in, Treme remains the same admirable, well-intentioned, and even better-acted chore it’s been since the beginning. Its commitment to detail is unparalleled, its soundtrack is immaculate, and its drama is inert. I say this not with snark but with real respect: I don’t think David Simon much cares about making “good television,” at least in the serialized sense that we’ve come to expect. I think he cares more deeply about educating than entertaining. I’m no Dickens rider, but even I can see that Treme is a labor of love even if watching it can be laborious. But this disconnect only grows in Season 3: It’s odd to see a show so concerned with pleasure be so unable to communicate it. Simon is a brilliant man with nearly impeccable taste, but once he strays south of Charm City, he seems unable to get out of his own way. Treme traffics in undeniably important issues and ideas that would be anathema to most showrunners: matters of race, class, culture, and crime. But there’s rarely a moment when the viewer isn’t reminded of that importance. The gorgeous location shots show us plenty about New Orleans; the weighty scripts never pass up an opportunity to tell us twice as much.

Part of Treme’s heavy-handedness is the result of its ambition. The intent of the series was to chronicle the Crescent City’s tough road to rebirth in the year after Katrina. With a goal so large, the little things were often overlooked. No matter how hard Pierce or Clarke Peters or Melissa Leo — again, this is a tremendous cast! — struggled against the restrictive nobility of their characters, the effort was ultimately more doomed than the levees. For the first season, at least, the denizens of Simon’s Treme were rough caricatures practically by design — the frustrated musician, the infuriated scholar, the infuriating disc jockey — there to be shaken by hideous events and hardships in order for us to shake our heads in solidarity. They were weathered, memorable faces superimposed over headlines that had been too easily forgotten.

And, to be fair, this sort of advocacy drama certainly worked well the first time Simon tried it. The Wire was similarly uninterested in narrative tricks and gambits: It eschewed cliffhangers, fan service, or easy resolutions. But with Katrina now two years in the show’s past, Treme is content to settle further into the quotidian struggles of its loosely sketched — and even more loosely connected — cast: Antoine’s bumpy adjustment to teaching, Sonny’s chaste courtship of his Vietnamese boss’s daughter, Terry’s graceful struggle against departmental corruption. The pace is slow and the focus hazy. (Treme is so low-key, I actually sat through 30 minutes of the fifth episode before realizing I had inserted the wrong disc and wasn’t watching the season premiere.) Each of these story lines has its moments, mostly thanks to the unshowy performances. (David Morse especially is remarkable in a rare, non-villainous role, and Khandi Alexander, as wronged bar owner LaDonna, is a Category 5 force of nature.) But what muffles any momentum is the very clear, constant indication that there is very much a right way and a wrong way to feel about it all. The further Treme gets from the eye of the storm, the more its very worthy argument begins to feel like a lecture.

And that’s just the serious stuff! Nowhere is Treme more stultifying than in its aesthetic pursuits, best represented by Steve Zahn’s relentless professional admiration. (A terrier with a Mojo subscription, his DJ Davis spends much of this new season collecting real-life Bayou legends like pogs in an attempt to record a funky opera about the hurricane.) Simon and his co-creator, New Orleans native resident Eric Overmyer, are so solicitous of their subject matter that their fandom has become fawning; not only are greats given ample performance time, they’re also routinely name-checked and genuflected to like royalty. Being surrounded by music is one thing, but being cornered by music critics is quite another (believe me; I know!); the litany of references and proper opinions begins to sound exclusionary, a rote recitation of passwords. Lacking an encyclopedic knowledge of what you’re appreciating is a fate worse than death (“It’s not enough to get a good review,” intones a learned tastemaker. “You need the review to actually understand the work”). Despite all the spirited call-and-response, there’s precious little room for joy or discovery; just a grim frog-march from one club to another. You don’t need to have a trumpet to recognize the difference between playing jazz and tooting your own horn.

Ditto the meandering plot concerning Janette Desautel, the Lazarus chef played by the great Kim Dickens. As the season begins, she’s still adrift in the unmusical landscape of Manhattan, dutifully parroting the passions and pet peeves of her primary author, Anthony Bourdain. She sips Pappy Van Winkle and pals around with IRL simpatico luminaries like David Chang and Tom Colicchio. She bows before the awkward aprons of the Torrisi boys. The problem with all this accuracy is that it suffocates the drama; it’s not story-elevating, it’s name-dropping. As much as I agree with Treme’s take on food — Jonathan Waxman’s roast chicken really is crazy delicious! — the constant affirmation sticks in my throat. In his native Baltimore, Simon didn’t need to apply for membership, so his sly humor helped smooth over The Wire’s sometimes rough exposition. On Treme, he too often privileges authenticity at the expense of art, a tourist trying to pass as a local. “This town: You can’t make it up!” a character sighs with real affection in an upcoming episode. But, God, I wish someone would occasionally try.

Perpetually low-rated and intractably high-minded, Treme remains an honorable oddity, the ProPublica of pay cable (in more ways than one !). I applaud its survival even as I admit defeat. Look, jazz and zydeco can be great; a cold beer in your hand in a hot club makes them even better. New Orleans is a national treasure; Wendell Pierce and Clarke Peters are getting close. I love stinky cheeses, fine cognac, gumbo, and social justice. I’m glad Treme is being made, I just don’t think I can bear to keep watching.