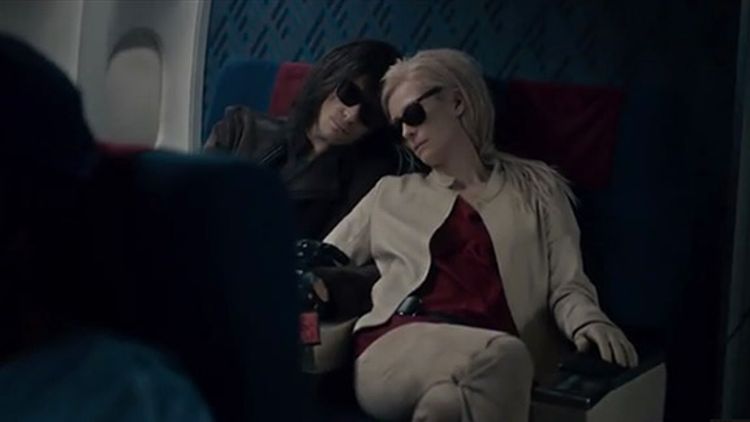 When I saw Sonic Youth live a few years ago (pre–Gordon Moore flameout), I distinctly remember my friend and I shouting to each other multiple times throughout their set “They are vampires [hesitant question mark?].” “They have to be vampires.” “Seriously though, they are vampires.” It made sense that a certain kind of ’90s alt-rocker would age exceedingly well, but this was ridiculous. Now, upon seeing Tilda Swinton and Tom Hiddleston as ineffably glamorous Wayfarer-sporting undead rock stars, I can’t help but think Jim Jarmusch’s latest film, Only Lovers Left Alive, is like a reverse 50 Shades of Grey fanfic project about Kim Gordon and Thurston Moore with the names changed and the bloodsucking stuff stuck back in. This is fantastic news, obviously.

ICYMI before its premiere this summer at Cannes, here is the official synopsis of the film:

Set against the romantic desolation of Detroit and Tangier, an underground musician, deeply depressed by the direction of human activities, reunites with his resilient and enigmatic lover. Their love story has already endured several centuries at least, but their debauched idyll is soon disrupted by her wild and uncontrollable younger sister. Can these wise but fragile outsiders continue to survive as the modern world collapses around them?

I feel like someone has finally made my Notebook, and it makes so much sense that that someone is Jarmusch. Also, of course Mia Wasikowska is T.Swint’s little sister. Of course she is. Most importantly though, in the twilight (ugh, I’m so sorry) of the modern vampire (seriously, it won’t happen again) era, Jarmusch has managed to remind us what was cool about vampires to begin with, and it has nothing to do with sparkles and virginity parables and everything to do with just looking really fucking badass on a plane. Seriously:

If that image can’t bring vampires back, the genre really is True-Dead. But at the very least, it should prove to be some pretty great counterprogramming to Inside Llewyn Davis.

Filed Under: Tilda Swinton, Trailer of the Day, Vampires