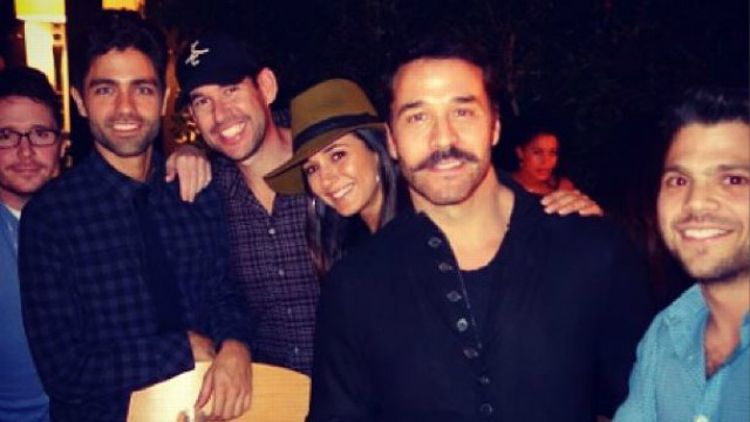 Wednesday night’s news that the Entourage movie is a go was a huge relief to Vinceheads everywhere — there hadn’t been so much unbearable tension in the Chaseiverse since it took Vinnie a full two minutes to coax an attractive grocery bagger into a quickie on a crate of baby kale behind the West Hollywood Whole Foods — but it came with the very real worry that the prolonged contract negotiations might turn the boys against one another. Well, that was just a stupid thought, because (1) #EntourageBoysShare, and (2) bros before back-end participation, always. Jeremy Piven, briefly at the center of the holdup over his taste of the profits, shared this Instagram photo of the gang reunited over the weekend.

And look how happy everyone is! E, Vince, creator Doug Ellin, Sloan, Mr. Selfridge, Turtle, that little orange head growing out of Piven’s shoulder that whispers in his ear that he’s worth double the other guys because count the Emmys, bitch … they’ve never looked more content. This is all happening. There is nothing anyone can do (or would dare attempt) to stop it. Even if Drama is conspicuously absent; we’re sure he was just busy that night. A merchandising meeting for Johnny’s Bananas plush toys. Easy explanation. When the cameras roll in January he will be there. Bet on it. And hush that talk that he’s already pushing hard for a spinoff. That’s not happening, we just made it up. He’s also not being replaced by Val Kilmer. Another lie. Stop trying to drive a wedge between the boys. It won’t work. See you at the premiere, haters. #ohyeah