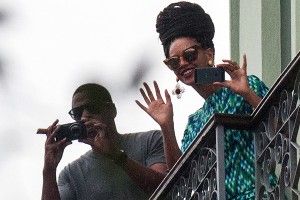 When photos of Jay-Z and Beyoncé celebrating their anniversary in Havana first popped up, the reaction was, of course, universally positive. (It was something along the lines of, Wow, what an amazing couple. May nothing ever happen to disrupt the Carter-Knowles union. That would surely shatter all belief in the possibility of true love forever.) Over the weekend, though, things got a little more complicated.

As you may or may not know, travel to Cuba for Americans is restricted. According to the State Department, “Each traveler must have a full-time schedule of educational exchange activities that will result in meaningful interaction between the travelers and individuals in Cuba.” So, technically, tourism trips to Cuba are not, you know, legal? But Jay and Bey just kind of seemed to be vibing?

In response, two Republican Florida representatives dashed off a letter to the Treasury Department’s Office of Foreign Assets Control, writing, “Despite the clear prohibition against tourism in Cuba, numerous press reports described the couple’s trip as tourism, and the Castro regime touted it as such in its propaganda … The restrictions on tourism travel are common-sense measures meant to prevent U.S. dollars from supporting a murderous regime that opposes U.S. security interests at every turn and which ruthlessly suppresses the most basic liberties of speech, assembly, and belief. We support the Cuban people by refusing to sustain their jailers.”

As CNN points out, though, “Americans have been known to get around travel restrictions to Cuba in the past by stopping first in a country with flights to the island. Cuban customs officials are familiar enough with the practice to not stamp American passports when they cross their desks.” And that may well have been the whole point of this endeavor. Jay and Bey just reminded us once again that the limitations the world attempts to impose on us are mere illusions, that naysayers exist to be naysayed — that anything is possible, including but not limited to tourism-specific and not education-oriented travel to Cuba for American citizens. And so, once again, we thank America’s first pop couple for reminding us to dream.