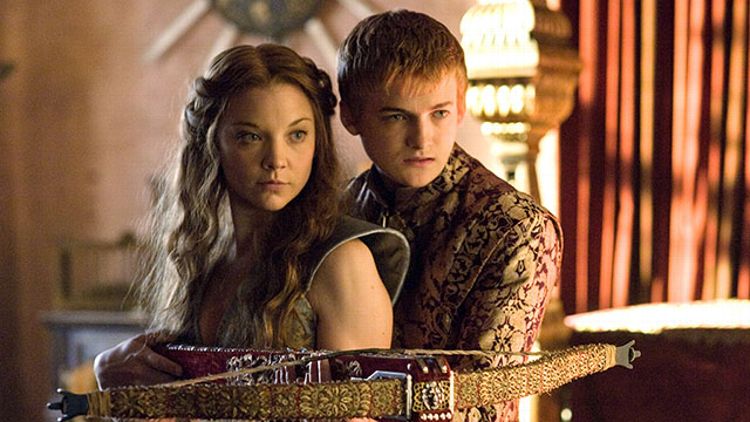 A toast to the the lucky ladies of Westeros! Yours is a continent teeming with options for the modern woman. Will you choose to be “intelligent” as your king suggests and “do what [you’re] told”? Best-case scenario: You don’t hate your chosen husband, and your eventual children don’t hate you — Cat Stark had a setup like that for a while, before she wound up widowed and in chains. Sure, she’s “an honest woman,” as her sworn protector tells the mocking Kingslayer, but a fat lot of good that did her. The minute she starts trying to think for herself, she’s left alone sewing solitary dream catchers like a Widespread Panic fan trying to make a buck at Bonnaroo.

Or perhaps you’ll take a more independent route, like Ros? She’s got a head for business, which means, naturally, she’s got to put her body to work, too; it’s a glamorous existence doing the bidding of Littlefinger and just plain doing little people like Tyrion. Whoring is an opportunity to get a leg up in the man’s world of Game of Thrones —  and very often two. So what if it’s less Lean In and more Lie Back? At least your average wine-drunk lord comes faster than winter.

I suppose there’s another possibility: You could opt out of that feudal system entirely. But, honestly, the road isn’t any easier for those who choose to reach for the sword instead of some nasty knight’s scabbard. Brienne’s brute force is enough to impress even Jaime Lannister, but not even her considerable body armor can be expected to deflect the nonstop barrage of barbs directed her way. Of course she loved Renly. He was the only one in the Seven Kingdoms willing to see things in people that the rest of society wouldn’t — of course, one of those people was Ser Loras, and one of those things was himself. Until a new arrival last night, Arya Stark seemed to be the only other character inclined to hack and slash her way to gender parity. The only problem is that her lack of bulk leaves her bark considerably more fearsome than her bite. Which isn’t saying much. Without the power of her name — or the list of them that Jaqen maintained for her last season — she hasn’t any power at all. In Westeros, whether you choose to pluck bow strings or heartstrings, it seems the only guaranteed outcome is penetration.

One of the advantages of Game of Thrones’s massive story is the ability to offer these multiple variations on a single theme. As written by Vanessa Taylor, “Dark Wings, Dark Words” provided a survey of the state of feminism in Westeros, and what it found wasn’t very pretty. The women on display either knew dangerously little about their lot — Sansa’s innocent confusion over the true intentions of a skeazeball like Baelish, or Talisa’s love-struck joking about “grim, bearded, stinking barbarians” without noticing exactly who it is that surrounds her — or far too much. I enjoyed the introduction of Lady Olenna Tyrell, played with Dowager Countessian glee by Diana Rigg. (Seriously, her entire scene was so Downton Abbey, I half expected her to make an untoward comment about the Irish instead of the Lannisters.) She was resplendent in the cool summer air of King’s Landing, dropping zingers like wildfire (“once the cow has been milked, there’s no squirting the cream back up her udders!”) and presiding over her “foolish flock of hens.” But just because she uses lemon cake and flowers instead of a bow and arrow doesn’t make her any less dangerous. “We’re only women here,” she coos to Sansa. “Tell us the truth.” Sansa, of course, is a Stark through and through: She knows that truth is a weapon but always forgets the direction it tends to point. Even Margaery, who seems to be something close to expert at playing both men and her part, may be in over her head. It can’t be a coincidence that her little game of sex cupid with Joffrey ended with her finger on the trigger but her own reflection looking an awful lot like the target.

I’d like to think that Daenerys offers the only potential way out from this depressing cycle of sex and sexism. Though a continent away, her fiery warrior heart — not to mention her fire-breathing security system — makes her the only woman capable of making men kneel in front of her instead of having them perpetually expecting the opposite. But Daenerys didn’t appear in last night’s episode. And therein lies the downside of Game of Thrones’s wide-ranging digressions. There’s simply too much plot to allow the luxury of zeroing in on an idea or two. For every revealing Cat Stark monologue — is it really possible to hate someone who admits to being “the worst woman who ever lived”? What’s that? It is? Oh, carry on, then — there were excruciating moments spent watching Theon perfect his mid-’90s Wolverine impression. (I said it last year, and I’ll say it again: Regardless of what happens in the books, why is Theon still alive? His arc came to a perfectly reasonable, if ignoble, end up in Winterfell.) For all the lively minutes spent with Brienne and Jaime’s medieval Midnight Run, there was Mance’s middle school breakdown of the least popular cliques north of the wall. (Turns out the Cave People are the mathletes of the tundra. Clearly, this makes the Giants the Heathers.)

At times, David Benioff and D.B. Weiss are able to turn this sprawl into an advantage; last week, the multiple melodies came together in a rousing symphony of forward momentum. But last night, the relentless, unforgiving slog of story reminded me of the Night’s Watch’s torturous death march toward The Wall. Unlike in Season 2, when Stannis’s intention to take King’s Landing was evident, if slow-burning, I actually have no idea what conflicts are looming this year, which made it doubly frustrating to watch the half-dead murder of crows trudge south while Bran’s pity party headed in the opposite direction. Brienne and Jaime had a rousing sword fight, but I wish they’d jumped off that bridge when they’d gotten to it rather than allow themselves to be scooped up by yet another roving band of sour horsemen. I’ve generally learned to appreciate Game of Thrones for the unique storytelling machine that it is, but sometimes it’s hard to tell if the show’s treading water or if we’re just drowning.

It didn’t help that while familiar characters were shuffling aimlessly around the game board, new pawns were being added to it. I liked Arya’s chance encounter with the Brotherhood Without Banners mainly because I’m a fan of merry people in general, especially those whose chosen name sounds like a cult mixed with an NGO. The arrival of the Hound, however, puts an end to Arya’s strong streak of dealing only with those who are bemused by her. After his behavior at Blackwater, Clegane is about as welcome in King’s Landing as Stannis Baratheon. But even so, I don’t think his appearance bodes well for the occasionally cross-dressing little Lady Stark. As Tyrion has proven, being underestimated is a skill well worth cultivating in the ego-driven Game of Thrones.

I was less taken by the introduction of the dream-crashing Wonder Twins, Jojen and Meera Reed. It’s nice that Bran has an equally sensitive playmate to go warging or LARPing with. (I’m not sure what the cool kids call it, but I am sure that neither of these kids is particularly cool; they could fit right in with Mance’s rainbow coalition of moon worshipers and fire dancers.) But I wish they’d use their special talents for something other than bird-watching. The ability to see what’s going on in all corners of the Seven Kingdoms isn’t magic — it’s something anyone with an HBO GO password can do, too. What makes Bran and Jojen unique is that they’re in the story, not out here occasionally being frustrated by it. The sooner they start paying attention to all the different plots, the more likely it is they can gin up a way to bring them together. Meera may have limitless patience when it comes to protecting her towheaded warlock of a brother, but I’ve only just met the kid. It’s like Lady Olenna said: I don’t care if I’m screwing up someone else’s grand plans. Sometimes I just want my cheese!

SNL Episode 17: The Greatness That Is Melissa McCarthy