January Jones Is Right at Home in the Existential Western Sweetwater 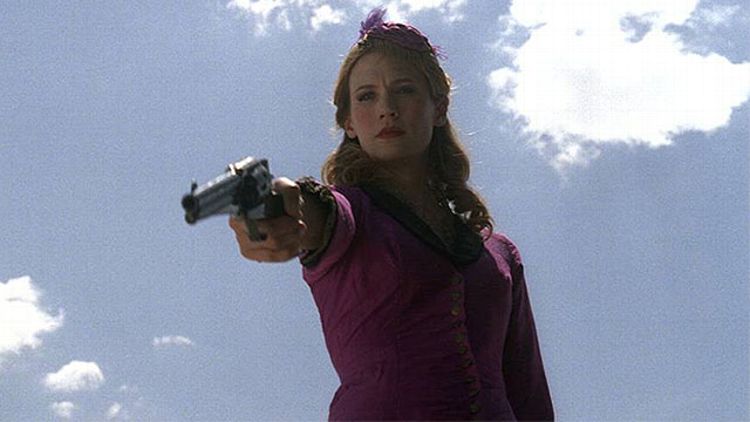 ‘Tis the season for goth Westerns! Sweetwater, the sophomore effort from twin brothers Logan and Noah Miller, premiered at Sundance earlier this year. If your comedown from Breaking Bad has you yearning for beautiful shots of the Southwest’s wide-open spaces, Sweetwater may be just the thing to sate your needs. Shot in Santa Fe and Abiquiú, New Mexico, Sweetwater is a traditional Western tweaked just enough to be contemporary. It’s a straight-up B-movie with formalist touches that feel true to its John Ford–worshiping roots. Eschewing cartoonish campiness or genre meta-commentary plaguing cowboy-themed dreck like The Lone Ranger in favor of starkness and minimalism, Sweetwater rarely falls into predictable Western clichés. It evokes early Coen Brothers movies, and not just because the Miller brothers are ridiculously close identical twin former models/minor league baseball players who collaborate and share credits. The direction is admirably restrained, and the dialogue and violence are played for naturalism rather than pulp. The film often wisely kicks back and lets the New Mexico landscape shoulder the work of being outrageously beautiful and spiritually troubling in its seemingly endless spaciousness.

Sweetwater is a classic existential Western in the mode of Anthony Mann’s Man of the West, Jim Jarmusch’s cult classic Dead Man, Deadwood, and Red Dead Revolver. It’s essentially a story about three people: a violent preacher played by Jason Isaacs, a barely recognizable Ed Harris as a wizened, Gandalf-haired sheriff, and January Jones as a former prostitute trying to pass as a respectable lady. The three leads are Jungian archetypes drifting across the desolate plain, summoned by fate into preordained roles as heroes and villains. Released in the U.K. as Sweet Vengeance, the American title makes more sense once you remember it also refers to the ranch from Once Upon a Time in the West. There are more than a few nods to Sergio Leone’s harmonica-tinged masterpiece; Jones’s character Sarah Ramírez’s backstory resembles Claudia Cardinale’s widowed homesteader Jill McBain. Sarah’s husband, Miguel, is played by Eduardo Noriega, best known in the U.S. for Abre Los Ojos, in which he played what became the Tom Cruise role in Vanilla Sky.

During Sweetwater I kept occasionally thinking about Gravity, which also plucks a couple of recognizable human personality types and places them in an infinite void. I am possibly just a sucker for narratives in which women are unable to depend on any of the male protectors assigned to them and must ultimately take full responsibility themselves. It’s not that the New Mexico landscape is desolate. On the contrary, it’s bursting with warmth and color. It’s more about the massive scale of the place, the vastness of the sand and sky. The ancient landscape throws everything else into sharp relief, particularly the comparative smallness of human beings and their problems. Even visceral life-or-death problems straight out of a Greek tragedy seem minuscule compared to the magnitude of nature. If that’s not enough to get you interested, did I mention that January Jones murders a bunch of people? And she is topless at one point? If you’re watching the movie just for that, you will probably be disappointed, because the scene is brief and doesn’t feel particularly exploitative, and mainly serves the plot. But if you like Westerns that move at a slow but deliberate pace reminiscent of ’70s movies, you are going to be stoked!

Sarah is undoubtedly the hero of Sweetwater, and her journey from hothouse flower to hardy cactus is incredibly enjoyable. Jones was born to play a horror movie’s final girl, and it’s all the more satisfying that she gets to do so in a Western. It’s also remarkable that she got to the Western genre before some of her Mad Men costars. I’ve been saying since the day the pilot aired that Jon Hamm has a face carved for Westerns, and John Slattery certainly knows how to dangle a cigarillo from his lip. But in the episode in which Betty Draper took a rifle to some pigeons, it became obvious that Jones was meant for gunslinging. Jones has been accused of wooden acting on Mad Men, but she’s pretty damn good in Sweetwater. It helps that she’s the heroine here, rather than an inconvenient obstacle for a charismatic asshole. Jones’s dyed red hair and sickly pallor add plenty of distance from Betty Draper. She gets a lot of mileage here out of her capability for being stern and stoic, hallmarks of any cowgirl or boy worth their salt.

As the ambiguous forces of good and evil, Ed Harris and Jason Isaacs are steadfast and menacing, respectively. They get a couple of good howlers in the script, but they are used sparingly and effectively. The one that is not unprintable (even on the Internet!) is Ed Harris’s Sheriff Jackson deadpan inquiring “Y’ever fuck a sheep?” before taking a large knife to a valued mahogany table. The effectively ascetic score is by Martin Davich, who composed music for hundreds of episodes of ER and Beverly Hills: 90210. Country star Jason Aldean also appears, in a small role.

Sweetwater feels like a labor of love, and the Millers’ ardor for films is apparent in every frame. For a low-budget movie, it feels very large in scope and drive, working beautifully within disciplined limitations. It’s an impressive second feature for the Miller brothers, and a reminder that you don’t need expensive effects to create a vivid sense of place and person, so long as you have proficient actors and a good script. It also doesn’t hurt to have an organically stunning special effect like the scenery of New Mexico on hand.