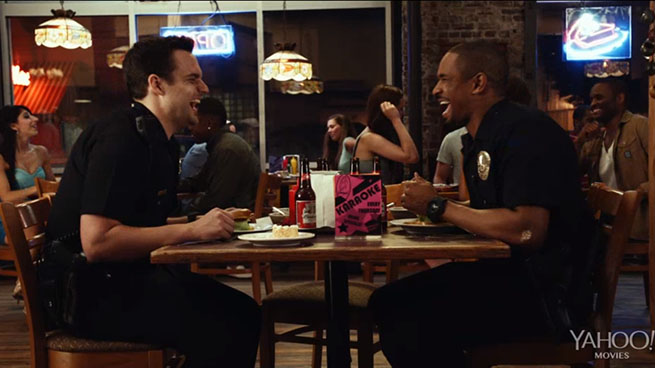 A movie called Let’s Be Cops lets you know right up front it’s not going to reinvent the wheel. So if two of New Girl’s lovable leading gentlemen reenacting Superbad and The Other Guys and 21 Jump Street is up your alley, that’ll be an option soon. The red-band trailer’s got cusswords and a cameo by Keegan-Michael Key.

Can Jurassic World just be here tomorrow? This is some concept art, and it’s really upsetting that it looks so cool and that the movie’s still more than a year away.

Kate Mara and Ellen Page would like to be the next True Detectives, please.

And P. Sean Combs Diddy would like to be Puff Daddy again, thanks.

Archer’s Miami reboot isn’t a forever thing. Creator Adam Reed tells EW: “I think this next season we will sort of unreboot, or whatever — deboot,” he reveals to EW, “and get back to the basics of some spy missions.” Recall that the FX series just got renewed for two more seasons.

This is the history of the movie trailer.

Seth Meyers needs to rethink Late Night’s chair game. Nobody even has a chance to be all slouchy the way things are now.

Prometheus 2 is moving along. After getting an original script from Transcendence writer Jack Paglen, it’s being rewritten by Michael Green, who just worked with Ridley Scott on that new Blade Runner project. P2 is being eyed for a March 2016 release. Also: “the sequel is expected to feature multiple ‘David’ androids, which means there will be more than one Michael Fassbender on screen at the same time.”

Spotify will charge college kids only $5 versus the usual $10. I’m pissed. But Spotify’s great, so the more the merrier, I guess? (Ah, still pissed.)

Pharrell knows about the hat jokes: “Anything different, people are going to look at and go, ‘Ha ha ha ha, what is that??’ Then, after a while, they do a little bit of research; they realize it’s Vivienne Westwood, an ode to her boyfriend at the time; they had a store together called World’s End. The guy who went on to sign the Sex Pistols, Malcolm McLaren.”

Chance the Rapper returns with a song made in his L.A. home studio.

Chris Evans sounds pretty not into acting anymore. “If I’m acting at all, it’s going to be under Marvel contract, or I’m going to be directing,” he tells Variety. “I can’t see myself pursuing acting strictly outside of what I’m contractually obligated to do.”

Corey Stoll is in talks to join Paul Rudd and Michael Douglas in Marvel’s Ant-Man.

Go deeply behind the scenes of Antiques Roadshow.

Check out the Gotham pilot’s Alfred.

And Arnold and Fallon somehow squeezed more life out of “Get to tha choppa!”