Jake Gyllenhaal Is Great in Prisoners, But Is He a Movie Star? 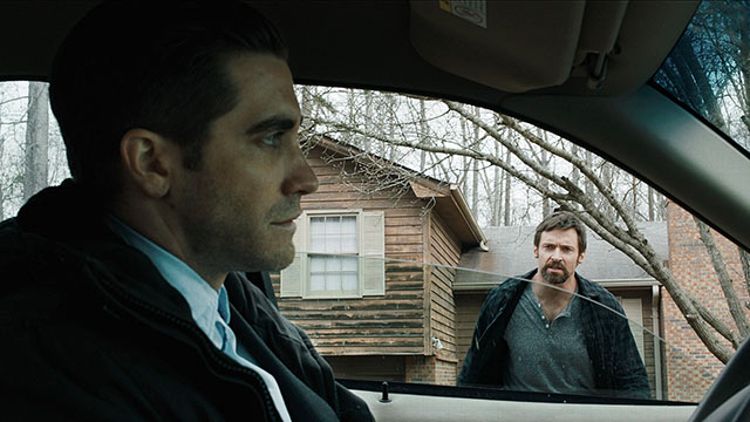 With nearly 30 films under his belt and the critical and commercial box office success of Prisoners, now seems as good a time as any to ask the question, Is Jake Gyllenhaal a movie star? And furthermore, does he deserve to be? The short answers are yes and yes, especially after this weekend. Prisoners took the top spot at the box office and drew overwhelmingly positive reviews, with particularly good notices for Gyllenhaal’s turn as an obsessive solitary detective. If that sounds familiar, it might be because you remember Jake’s performance as solitary obsessive cartoonist Robert Graysmith in Zodiac, or his star-making role as the titular solitary obsessive teenager in Donnie Darko. The incredible promise that Gyllenhaal showed in Donnie Darko and has sporadically displayed throughout his career so far comes into full flower in Prisoners, continuing the transition from boy to man he began in End of Watch.

Prisoners is by no means a perfect movie, but it is intermittently great and occasionally astonishing, carried by sophisticated performances from Hugh Jackman, Terrence Howard, Viola Davis, Maria Bello, Paul Dano, and Gyllenhaal. The casting works so well that the film often feels more interesting than it actually is, sewing itself back into predictability only toward the end. It feels like the perfect chaser to the straight shot of butter-flavored topping that was the summer movie season. Prisoners is eerie and beautiful, a movie for adults. It’s a suspense film that doesn’t rely on cat scares or an overzealous soundtrack to build tension. For a while it seems like it might be an even more interesting movie than it ultimately turns out to be, but the holes it digs up along the way are thought-provoking enough to excuse the turn toward a more traditionally satisfying Hollywood ending.

Jackman’s Prisoners character plays like a knottier riff on Liam Neeson’s Bryan Mills in Taken. As the father who will do anything to get his daughter back after she and a friend are abducted on Thanksgiving, carpenter Keller Dover is not a traditional vigilante hero, but something much more complicated and even less palatable. You would think Hugh Jackman might be tired of playing prisoners after Les Misérables, but that guy is obviously a masochist for an acting challenge. Jackman’s character is as much the focus of the story as Gyllenhaal’s, and the suspense of who, if anyone, will solve the case is compounded by the drama of seeing who will solve it first. Jackman is great and makes it look easy, as always. The two story threads run parallel and sometimes intertwine, with the cuts between them tautly paced.

Gyllenhaal is the equally driven Detective Loki, who is motivated solely by professionalism rather than personal involvement. Gyllenhaal has matured considerably as an actor since Zodiac, although Prisoners draws easy comparisons to David Fincher’s ultimately superior 2007 film. In Zodiac, Jake seemed shaky compared to the more sure-footed performances by Robert Downey Jr. and Mark Ruffalo. Gyllenhaal publicly griped that Fincher’s patented do-a-million-takes-of-every-scene-and-then-pick-one style left little room for Method acting, with Fincher responding that he had hoped to knock the Method out of his actors to try to get something even more spontaneous and natural. But unhappy sets often make for the best movies (and vice versa). Zodiac is a masterpiece that further solidified the reputations of both Fincher and Gyllenhaal.

Prisoners and Zodiac take a similarly contemplative approach to the thriller, foregoing nonstop thrills in favor of long, uneasy pauses and ambiguous shots, often of the gorgeously desolate snowy wilderness. Every shot seems to hint at the possibility that the girls or their bodies might be somewhere out there. The thrills are still breathtaking when they do come, all the more so for their irregularity. Director Denis Villeneuve, the French Canadian director making his big-name American debut with Prisoners, shares Fincher and Zodiac’s fondness for puzzles and games. Mazes, some without solutions, are the film’s creepy motif and orchestrating device. Two young girls disappear, and an unholy labyrinth unwinds through the town’s forests, basements, and boarded-up houses. Prisoners was filmed in Conyers, Georgia, but takes place in fictional Conyers, Pennsylvania. Fictionalized Conyers is a working-class anysuburb, registering as archetypal but specific to a certain kind of freezing-climate, blue-collar town.

In Prisoners, Gyllenhaal employs one small actorly tic (erratic double blinking) that defines and explains everything about his character, a loner detective without a partner in the squad car or at the dinner table. He’s a dogged investigator, but also mannered and reserved, the cool counterpart to the more volatile Jackman. Gyllenhaal hangs back in the cut a little more than usual and seems more natural than ever. He seems like an older, alternate version of Zodiac’s Graysmith, unable to sleep at night in case some new piece of evidence gets found while he does. Where Graysmith had a novice’s enthusiasm for investigative work, Detective Loki has a lifer’s weary stare and dulled emotions. Gyllenhaal seems believable, and that makes the movie’s hypernaturalism work.

Gyllenhaal has always bounced between art films and tentpoles. His first movie was a little art film by the name of City Slickers, in which he made his brief debut as Billy Crystal’s son. Gyllenhaal is second-generation Hollywood; his parents are screenwriter Naomi Foner and director Stephen Gyllenhaal. Like with his sister Maggie, you get the feeling that Jake’s choices are informed by more than just money or Oscar hopefulness. Both Gyllenhaal siblings always seem to be searching for some transcendent, ineffable quality through their roles, a luxury allowed to them through their indie star status and undeniable acting chops. If Gyllenhaal comes off sounding pretentious when discussing his craft on Inside the Actor’s Studio (and who doesn’t, besides Dave Chappelle?), he also seems hopelessly earnest about continually bettering himself as an actor and working on meaningful projects. Gyllenhaal’s core aspect is sensitivity, which, depending on the role, he plays up, down, or against.

But let’s get back to those tentpoles for just a moment. Gyllenhaal’s biggest misfires have all occurred in big-budget movies. Rather than reinforcing him as an A-list leading man, they made his box office power more questionable. He was fine in the campy Roland Emmerich global-warming disaster The Day After Tomorrow, in which he was part of an ensemble of name actors running away from CGI wolves and snowstorms. Prince of Persia: The Sands of Time, on the other hand, is just plain awful. A movie built backward from its merchandising is never good, and if you’re going to shoot for a franchise, probably best to put on a cape instead of sword and sandals. Video-game movies are notorious crapshoots. And of course, the whole project was fraught with racism from casting a white guy as the fucking Prince of Persia.

Having turned in admirable work as troubled young men in Donnie Darko, The Good Girl, and Moonlight Mile, Jake swung for the fences with Brokeback Mountain. His penchant for choosing great scripts and talented directors paid off with simultaneous indie and mainstream success, and everything perfectly aligned. Ang Lee’s ambitious gay drama was a tearjerking melodrama fused to a classic pastoral Western, and although Gyllenhaal was excellent as Jack Twist, Heath Ledger was the true revelation as Ennis Del Mar. Both actors upped their games for Brokeback, and Gyllenhaal never seemed even a shred bitter that Ledger had garnered the bulk of the praise. They were both nominated for Oscars, Gyllenhaal as a supporting actor and Ledger as a lead (neither won).

After Brokeback gave Gyllenhaal a taste for Oscar glory, he overshot his ambitions alongside director Sam Mendes with Jarhead, which practically dripped with prestige and hype, but was curiously flat and nonathletic for a film about the military’s toxic macho culture. He came back from Jarhead with Zodiac, which at the time was considered something of a niche hit, but has grown in stature every year and is some people’s (my) favorite David Fincher film. Jake’s collaboration with sometime girlfriend Reese Witherspoon in 2007’s Rendition suffered from overreaching toward importance; he fared better working with Jim Sheridan on 2009’s well-acted and minimalist Brothers.

After Prince of Persia fell flat on its face trying to jump between buildings, Gyllenhaal turned down the pomp and tried to win audiences back with a rom-com, Love & Other Drugs. Acting opposite his Brokeback costar Anne Hathaway, L&OD could have coasted on the chemistry between its two likable leads, but it was unfortunately also a Trojan horse weepie in the mold of Love Story and all of those Nicholas Sparks movies. Anyone hoping for a light, charming exploration of modern romance was sideswiped by the film’s maudlin twist, which sucked all the life out of it and made it feel like a trick. Having expanded his repertoire slightly further, Jake teamed up with director (and son of David Bowie) Duncan Jones for Source Code, a paranoid thriller that benefited from the sharp supporting cast of Michelle Monaghan, Vera Farmiga, and Jeffrey Wright.

In End of Watch, he played opposite the exquisite Michael Peña, under the direction of David Ayer, the writer of Training Day and all-around hard, pulpy crime film specialist. Gyllenhaal bulked up to play an LAPD officer and was well-received playing a roughneck, against normally moony type. He also had a particularly big year in the press as the subject of a Taylor Swift album, something he never acknowledged publicly, probably because it is soooo embarrassing, but hey, it’s a great album. In 2009 he was in a David O. Russell comedy called Nailed, whose production was shut down four times for various reasons, including a fight between Russell and James Caan that resulted in Caan walking off. Jake was also once attached to Damn Yankees with Jim Carrey as Mr. Applegate, and should still definitely do a musical, because we all know from his drag Dreamgirls opening number on SNL that the dude has pipes.

One thing Gyllenhaal has been especially good at throughout his career is surrounding himself with other skilled actors and being a generous performer. He is clearly a student of good acting, smart enough to work with the best so that he can learn as much from them as possible. His next film is another movie with Villeneuve, a psychological thriller called Enemy with Mélanie Laurent and Isabella Rossellini. After that it’s a Mount Everest movie called (duh) Everest with Baltasar Kormákur, the Icelandic director who just brought you 2 Guns. And then there will be a movie called Nightcrawler, which is mercifully not an X-Men spin-off, but rather about “the underground world of L.A. freelance crime journalism.”

In fact, Jake should stay as far away from superhero movies as possible. Getting locked into a big franchise would be a terrible idea, when instead he can just keep making diverse and smart choices in character studies, making Ryan Gosling sleep that much less easily at night on his bed of money with Eva Mendes. Gyllenhaal should just keep notching cool directors and picking scripts that he likes while sleeping on his own bed of money with Alyssa Miller. Prisoners shows Jake to be not only a capable leading man, but finally a fully confident one.

Bryan Cranston Reads a Dirty Letter From a Fan Who Wants to Do Aaron Paul While He Watches, or Something