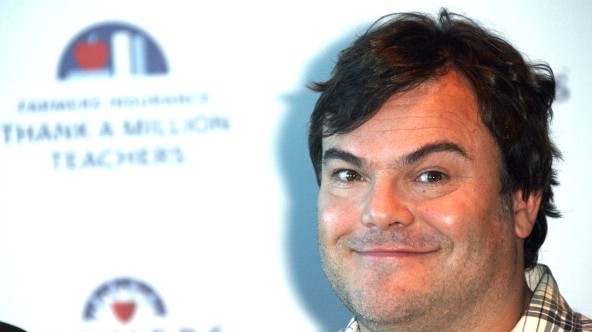 Sony’s Goosebumps film hasn’t really given us anything to get excited about until today. Because now we know that Jack Black isn’t just starring in it, he’s playing R.L. Stine, and the plot is totally meta: The protagonist, a high-schooler named Zach (such a Goosebumps name), meets a neat girl named Hannah, and then her dad, Mr. Stine. “It turns out that there is a reason why Stine is so strange … he is a prisoner of his own imagination — the monsters that his books made famous are real, and Stine protects his readers by keeping them locked up in their books.” UNTIL THEY GET LOOSE. Sounds like my fourth-grade self and my modern-day self are going to have a nice night at the movies together.

RZA to, uh, Sports Illustrated, about the whole kerfuffle happening lately: “If we don’t come to terms [with Raekwon], I think, within the next 30 days, then this will either be an album without Raekwon or an album that never sees the light of day. And that’s a very strong potential.”

The fourth and last season of The Killing will debut on Netflix on August 1. It’s only six episodes.

Scarlett and Lupita are in talks for Jon Favreau’s The Jungle Book remake. Johansson would voice the hypno-snake Kaa; Nyong’o would voice “Rakcha, a mother wolf who adopts Mowgli.”

Lupita, continued: Kimmel did an investigative report into just how many newscasters have no clue how to pronounce Nyong’o. Here, someone send them Lupita’s YouTube tutorial.
https://www.youtube.com/watch?v=eNFs16F4wsQ#

Do you know any of the actresses they cast for the Jem and the Holograms movie? Maybe Nashville’s Aubrey Peeples, who’ll play Jem? (And do you know why they didn’t just ask the ladies of Spring Breakers to do it?)

The final Hobbit will now be subtitled The Battle of the Five Armies. “There and Back Again felt like the right name for the second of a two film telling of the quest to reclaim Erebor, when Bilbo’s arrival there, and departure, were both contained within the second film,” says Peter Jackson. “But with three movies, it suddenly felt misplaced — after all, Bilbo has already arrived ‘there’ in the Desolation of Smaug.” The complete DVD set might wind up being called There and Back Again.

How else are we supposed to know about nuns if Lifetime doesn’t do a reality series??

Neil Patrick Harris on his role in Hedwig and the Angry Inch on Broadway: “I have reams of Scotch tape to try to take off all the glitter every night.”

Beyoncé’s on the cover of Time’s 100 Most Influential and Magical and Good-at-Dancing People issue.

And, speaking of Beyoncé — just go with it! — here’s the first new Slayer song in five years, and the first since guitarist Jeff Hanneman’s 2013 death. Pretty sure I heard the words “World War 10,” which, \m/
https://www.youtube.com/watch?v=sBG1WLxlQ9M