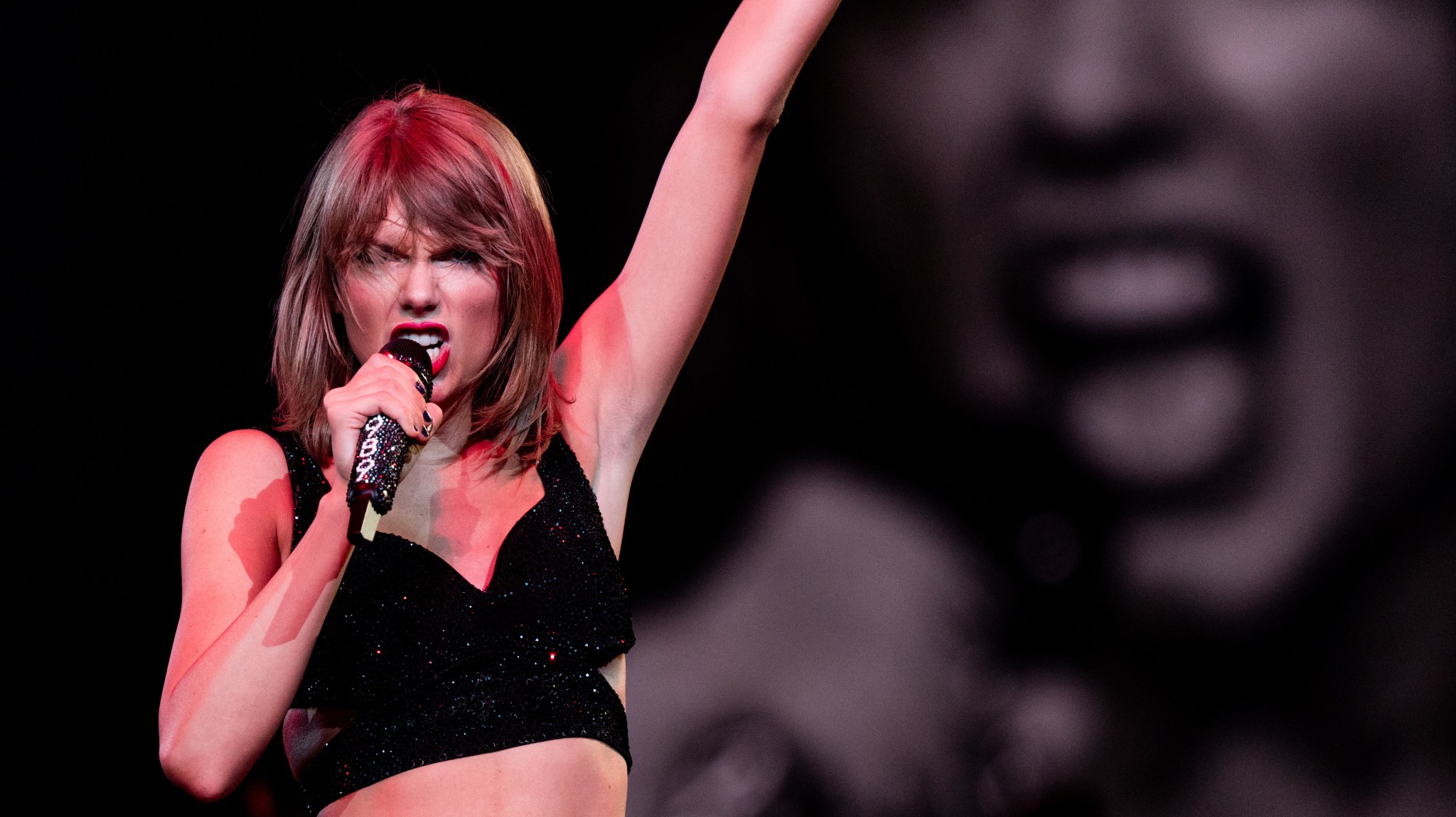 Is there anything more cringe-inducing than couples in the honeymoon phase? They make long-term couples roll their eyes and single people vomit. Nonetheless, there is something sort of awesome about watching people see each other through rainbow-colored glasses, drunk on their own love for each other and completely oblivious to everything else in the world.

When I read that Taylor Swift mouthed “I love you” to Calvin Harris from the stage during her run of sold-out shows, I couldn’t help but shake my head and say “those crazy kids.” Six months into a public relationship, Calvin is both Taylor’s longest-lasting and most public boyfriend. When all eyes are on you, some are inevitably going to be waiting to watch you crash and burn. So it’s gonna be forever? Or it’s gonna go down in flames?

Those of us with long memories feel empathy for Taylor, who has no choice but to fly Icarus-like toward the sun of true romance every time. She was bitter in the aftermath of her relationship with Harry Styles, the One Direction boy bander who blew his own chance at any potential solo superstardom after his tropical vacation breakup with Swift. Taylor had reached the breaking point where she was thinking she might not ever be able to have a boyfriend, let alone a husband. There was too much pressure and too much publicity. She had become jaded by the spotlight’s glare on all of her relationships, finding it slightly harder after each failed relationship to muster up the energy to be her usual wonderstruck self.

After venting her frustration over a lack of viable partners — how can someone as famous as Taylor Swift date casually? — and being traumatized by boyfriends like Jake Gyllenhaal, who purportedly wanted to keep their relationship secret, she initially blamed her own fame and success for her romantic failures. But then she realized that it wasn’t her fault, that the perception that her singledom was a character flaw is merely indicative of a cultural blind spot. Nonetheless, even if she didn’t need love, she still wanted it. In songs, Swift asked why she always ended up with men who somehow had the upper hand. She didn’t want the upper hand herself, she just wanted equal hand — two paper airplanes flying.

Swift, the poet laureate of romance, was giving interviews in which she questioned the whole concept of true love, wondering whether it was just something the world’s Don Drapers had made up so that she could write songs about it that could be used to sell girls tour shirts and Diet Coke. The upside of Taylor’s new agnosticism about relationships was that she focused on creating a full life for herself independent of a partner.

No longer waiting for her prince to come, she realized that she could have a rich life as a single person, and that being single could actually be great because she never had to compromise. Instead of downplaying her success with “aw shucks” surprise, she started to own it. She moved to New York and became best friends with a bunch of models and celebrities. She traded in her Red-era cozy autumn togs for 1989‘s crop tops. She publicly called herself a feminist, and questioned why the media always demonized rich, successful female celebrities as controlling, needy, and desperate to be loved. Swift resented her reputation as a perpetual victim of love, as the girl who almost has it all except for that one society-validating thing. So she rewrote her image: The Swift of 1989 was a cool, carefree, single girl in the city who happened to be a self-made millionaire.

And at the precise moment Taylor Swift gave up on ever finding love and happily made peace with the idea of becoming a cookie-baking cat lady instead, in swooped Calvin Harris, the millionaire Scottish DJ. It was a match made in good girl/bad boy heaven. The not-so-innocent Swift and the secretly-a-nerd Harris were a blond, tan, Las Vegas fantasy couple whose love was anointed with sequins and glitter. Calvin Harris, rich and famous in his own right, had started out as a sort of indie-electronic artist before making himself over into an EDM bro and becoming a megastar.

The pair were rumored to be dating for a while when Taylor publicly outed them on her Instagram after it became obvious that they were going to last. And Calvin, rather than be emasculated by the role of Taylor Swift’s boyfriend, seemed to thrive on the attention. Together they were the supernova entity known as a power couple — who else could understand the nightly tour load-ins, the lonely nights in strange hotel rooftop suites with too much space for one person?

Ironically (in the Alanis sense), the thing the Taylor “I love you” moment most calls to mind is the time Katy Perry projected footage from her wedding to Russell Brand as her background while performing a medley of songs from her album Teenage Dream at the 2011 Grammy Awards. It was the first time the footage was shown in public, and it signaled the beginning of the end of the Brand-Perry union, which perhaps Brand — but not Perry — might have realized just then. Public displays of affection bring the messiness of intimacy out in the open, which can be risky. It’s especially scary if you’re doing it in front of millions of people.

But maybe I’m cynical. After all, to be open to love is to risk rejection and humiliation, and it’s comforting in some sick way to know that talented millionaires like Taylor Swift and Katy Perry don’t have access to any more emotional tools than we mere mortals do. Love hurts. When someone like Taylor gambles on her emotional well-being in such a massive way, we feel with her the same breathless suspense we feel when we do it ourselves. And because Taylor has romantically fallen on her ass in public a few times, one would assume she’s learned the invaluable lesson of experience — that she always lived through it and eventually stood back up again.

Having gotten maybe a blond hair too settled in their new power-couple status, Taylor and Calvin both became prone to attacks of Twitter Fingers™ recently. Taylor started a beef with Nicki that displayed how Taylor’s wokeness only went so far. Calvin got into a Twitter fight with ex–One Directioner Zayn Malik, who called Calvin a “dickhead.” Taylor wisely apologized to Nicki and hopefully learned something about the problems with White Feminism.

Swift also accidentally started a Stan war with the remaining population of Avril Lavigne fans when she publicly favorited a meme on Twitter that pitted her favorably against Avril with photos of their body language during meet-and-greets. Avril, rightfully, went “What the hell?” — not being the first person to question Swift’s “sisterhood is powerful” message with the reality that she can’t get along with every single woman on planet Earth, because women aren’t a monolith, they’re human beings who are all different from one another. And the unfortunate fact remains that sometimes women do have to fight over things of limited quantity that they both want just as much — whether it be dudes, jobs, or Video Music Awards.

Tayvin’s dual-pronged Twitter fuckups were very revealing in another way: They showed how similarly tempered the couple is. They both could not resist getting in their feelings online, which ultimately was a form of self-sabotage. The mouthed “I love you” seemed spontaneous, even for Swift, whose stage show traffics in artificial spontaneity. The Twitter fight felt weirdly intimate for Swift, who is normally so controlled and skilled with social media. And it demonstrated that Harris is just as passionate as Swift, which he has perhaps demonstrated before with his very public breakup with Rita Ora.1

If Swift aspired prematurely to marriage and forever love as a teenager, she’s actually right on track for her mid-twenties to be making superficially questionable decisions such as dating an EDM DJ, people who are not exactly world famous for their sexual fidelity. But having tried to do everything the socially sanctioned “right” way before realizing it was a scam, Taylor was in the correct mind-set to loosen up and stop overthinking things for a minute. I like to think that Taylor and Calvin will make it, and I can only imagine how invincible they feel in their international penthouses and luxury apartments, goofing off and laughing like dorks, swimming laps in an Uncle Scrooge money bin, and doing each other on a pile of platinum record plaques. It probably feels pretty great. And everyone knows that a dude with a passionate temper will make for good Tay songs. Calvin Harris is already by far Taylor’s most promising boyfriend to date. He knows exactly who she is, and he likes her for all of it.

‘Do You Like Prince Movies?’ Podcast: ‘Mistress America,’ ‘American Ultra,’ and More