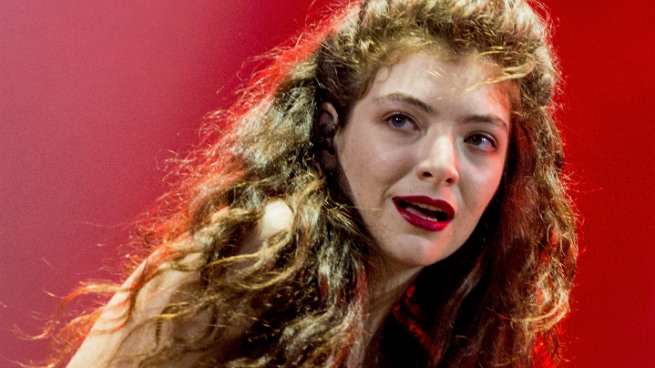 It’s been just over a year since the official iTunes debut of Lorde’s The Love Club EP. Since the release, the artist otherwise known as Ella Yelich-O’Connor turned 17 years old, released a platinum-selling album, argued feminism with Selena Gomez, weathered a probe into her romantic relationship, and won two Grammys. She has proven to be an authentic, precocious, and talented performer while redefining the notion of pop stardom (she told the New York Times in December, “I’m a pop princess at heart. Pop is about distilling what you want to say and making it easy. And the way I write isn’t about making things easy. It’s a weird juxtaposition”) while catering to a more sophisticated and intelligent demographic. Lorde Tumbls and Reddits, but her self-search results are nothing like the other 17-year-olds’ Google alerts. So this spring, Lorde has been taking a stand.

In a Billboard cover story from September, Lorde’s public image was described as “court[ing] enigma”; she released The Love Club on SoundCloud in November 2012, seeming to toy with the idea of creating an alternate identity à la her inspirations The Weeknd and Burial, because “mystery is more interesting. People respond to something that intrigues them instead of something that gives them all the information — particularly in pop, which is like the genre for knowing way too much about everyone and everything.” She wasn’t exactly reclusive, but she expressed a wish for not having to do interviews, and photos of her were scarce. These sentiments, combined with the fact that Lorde’s Pure Heroine album would see its U.S. release three weeks later and bring more exposure to the singer, seem quaint in retrospect: In the past six weeks, Lorde has publicly responded to unwanted airbrushing, taken issue with what she perceived as doublespeak in music criticism, and — most recently — hit back at a paparazzo named Simon Runting for allegedly stalking her.

Lorde was raised by the Internet, but some people really are jerks, and in the cases of Runting and zit-erasing, Lorde is the perfect person to stage a visible war against them. The barbs lobbed at Lorde and her appearance went to the dark place long ago, and then there was that whole racist explosion directed at her boyfriend, James Lowe. Lorde’s acknowledgment of her exposure to these ugly elements of the Internet forces a confrontation we don’t often see, and that’s positive: The disconnect in any online antagonizing (subtweets and all of their kin) is even bigger when we start talking about celebrities. It changes the game, and it should change the game.

This is particularly true with regard to Runting, a man whose name we never would have known if Lorde had not posted a picture of his face and name on Twitter along with the text “this man has been stalking me, photographing me and refusing me privacy. i am scared of him. he frequents central akl.” She published a link to his Facebook page, photos he’d taken of Rihanna while she was in a hotel last year, and stated, “I understand that this comes with the territory. i do not understand why I should be complacent.” Almost immediately, a #StopSimonRunting tag had been established and fans were out for blood.

The battle against the invasiveness of the media is familiar; in March, Kristen Bell and Dax Shepard launched a campaign against the publication of unauthorized photos of celebrity children by calling for a boycott of any magazine that featured them. Lorde’s approach was more calculated, and savvier. She acknowledged the hypocrisy of fame-complaining and was careful to specifically pin the blame on an individual who had stepped out of line too many times. She writes her own lyrics, and when she does show her face, she wants us to see it as it really is. That kind of honesty has strengthened her fan base and increased her power, whether it was intended to or not. Nobody has to stalk the controversy (or barefaced shot) out of Lorde. She provides those willingly.

But last week, Lorde made a misstep when she posted on her blog criticizing “publications like complex [sic]” for “profil[ing] interesting artists in order to sell copies/get clicks and then shit on their records,” using Complex’s Iggy Azalea cover story (and lukewarm album review) as an example. Flavorwire called her response “dangerous” to journalistic ethics, pointing out the difference between Internet haters and objective criticism: Why should marketing to an audience intrigued by that artist be equivalent to pandering to that artist? Shouldn’t Lorde — who signed with Universal when she was 13 — know that each cog in the entertainment wheel has its own ethics code, and for journalists this extends to an unbiased expression of fact or opinion, depending on the job? Complex responded by writing, “Maybe [Iggy Azalea] didn’t benefit from our review, but so be it. Celebrities seek attention and media coverage every time they do something great, why would the camera stop rolling when they do something not so great? And even if they do, it isn’t meant to be disrespectful—it’s meant to be critical. Like Common once reasoned on ‘The 6th Sense,’ ‘If I don’t like it, I don’t like it, that don’t mean that I’m hating.'”

It’s difficult to leverage influence with conscience, and even the most self-aware stars’ ability to do so is accumulated slowly and incrementally. Some things are too unfair to be considered status quo: Who better than a teen superstar who isn’t a PR puppet — a particularly vulnerable and audible voice — to challenge how we invade the lives of those we worship? At the same time, this is a koan of celebrity: When your time arrives, you must decide how to manipulate that initial, temporary fixation into something you can have a measure of control over, to train the eyes on exactly what you want them to see while accepting that certain distortions are beyond your control.

That’s the trouble with wanting to be defined by your art instead of your persona: Lorde’s instincts rarely lead her astray, but by arguing against honest criticism, she showed her soft spot. It’s the unlearnable conundrum, for artists and people ages 16 to 106: not being able to predict our futures, our careers, and our own evolutions. Last November, Lorde promised to “never […] change or let fame get the better of me. I’ll never go off the rails like Britney or do an Amy [Winehouse] — because my upbringing was so normal.” I believe that. Still, with great power comes great publicity. Who knows? Maybe Lorde will change the landscape of how we relate to our pop royalty, even if she occasionally fires at the wrong target. For the most part, when she was 17, it was a very good year.

The ‘If I Fought This Rapper, Would I Win?’ Chart