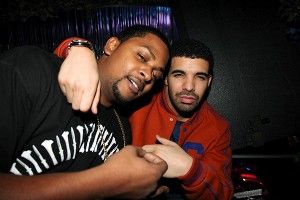 From outside the VIP section of Sin City Cabaret — “New York’s largest upscale gentleman’s bar” — all you can see is a gaggle of sweaty people, the blinding lights of HD cameras, and, every 45 seconds or so, a big poof of cash floating softly down from above. We’re here because Rick Ross is here: Last night, he assembled his Maybach Music Group for what was ostensibly a listening party for their new album, Self Made Vol. 2, although that part got a bit buried underneath all the stripping and whatnot. The party featured MMG’s Wale, Stalley, and Meek Mill, of course, alongside the likes of DJ Khaled and Drake — who’d go on to have quite an eventful night; more on that later — and came only a month after Ross’s instantly legendary MMG press conference. (That was the one where Diddy explained that every time he hears the Australian girl say, “I like this Maybach Music,” his dick gets hard.) For better or worse, as long as Ross stays on this ridiculous promo event roll, Grantland will have no choice but to continue to provide coverage.

Before Ross showed up, Sin City was in a state of anxious excitement. An army of strippers, many of them in underwear branded with the name of MMG’s new single “Bag of Money,” covered every logical dance surface inside the cavernous club, two or three to a pole. Some of the ladies were pulling minimalist moves not dissimilar to Lil B’s cooking dance; others were swinging upside down on the poles with such force and in such close quarters that I worried about my family having to explain to people that Amos can’t drive anymore because Amos caught a bedazzled heel in the temple. Over by a side bar, a tatted up blonde bartender was doing a masterful job of providing a sea of irritated cocktail waitresses with a constant stream of ice buckets full of sparkler-tagged Ciroc bottles.

When Ross did show up, the action intensified, and concentrated itself in the VIP corner. I trudged my way in there and noted a remarkable sense of order within the mayhem. I’m not sure if they’d worked this out ahead of time or what, but the MMG crew peacefully assembled into a few rows, like a graduation-day class photo, with Ross in the center, and Wale, Gunplay, and Stalley arranged in lines behind and to the side of him. Everyone in the crew had massive fist-sized stacks of singles, and, somehow, a rotation as to who would create the next poof of cash presented itself naturally. The money flow was incessant. A couple of times I turned my head the other way, only to have a floating single flutter through my line of vision and direct me back to the action. Quickly, there were ladies crouched on the carpeted ground shoveling bills into tote bags. One stripper, decked in heart-shaped pasties, commandeered the prime piece of real estate, on a banquet closest to Ross, but she seemed sort of indifferent: In between gyrations, she paused to text.

In the bathroom, a couple of younger kids chatted, and one explained to the other that he was heading back to a recording studio to work some more, despite the late hour. The explanation as to why he was exiting the debauched scene: “When it’s my time to shine, I’mma shine! When it’s my time to shine I’mma milk it for all it’s worth!” Subtext: Last night was not yet his time to shine. Over in an opposite corner, Drake, who played a show in New Jersey earlier in the day, had shown up and taken over a section of the club with a crew of big bodyguards. Standing on a couch in what may have been a Fila sweatsuit, he looked trademark sad and solemn, and he wasn’t even burdened by the events that would unfold later.

As you might have read, Drake ended last night in a Manhattan club called W.I.P., where he may or may not have bottled Chris Brown in the chin. Initially, TMZ was reporting that Drake and Chris scuffled over their mutual ex, Rihanna; now they’re saying it was actually Meek Mill who took a bottle to Chris Brown’s face. Later, Brown tweeted a photo of the cut on his chin, along with such messages as “How u party wit a rich n**** that hate? Lol … throwing bottles like girls? #shameonya!”

OK, but I didn’t see any of that stuff. All I saw was Drake standing on a couch, looking sad, in what was probably a Fila sweatsuit.

Later, Ross would take the mic to deliver some prepared remarks. He started with roll call, shouting out the celebrities in our midst, declaring that “the whole BX in this bitch. Sherri, I see you grindin’. Gucci Pucci in this bitch too,” and ended with a bit of undeniable, conveniently-brand-forward truth: “All we know is that we self-made, and we only live once.” For some reason, around this time I started noticing a whole bunch of strippers hanging off to the sides, grubbing on Styrofoam platters of fried calamari. Also, I think at that point the DJ might have actually started playing the album.