In Retrospect, Jim Carrey Isn’t So Sure Starring in Kick-Ass 2 Was Such a Good Idea 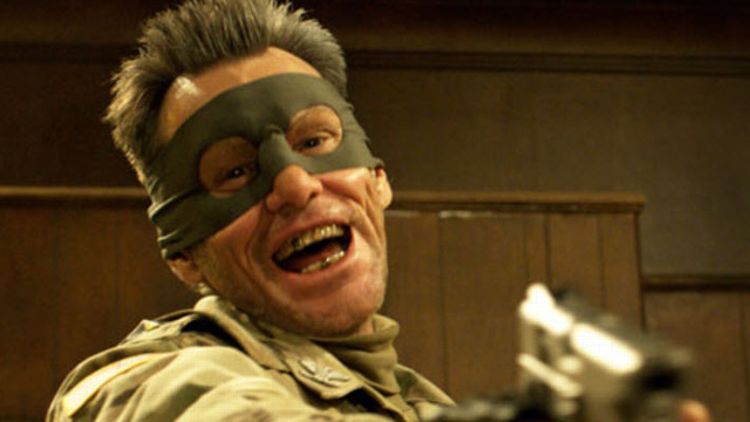 Mutiny on the SS Kick-Ass 2! With the sequel to the modest hit (it made almost $100 million in overall box office) in theaters in August, Jim Carrey — who joins the proceedings as Colonel Stars and Stripes — has decided to let the people know he kind of regrets signing up to the ultraviolent affair. And answering back is Mark Millar, the creator of the comic books the movies are based on. You want measured, thought-out debate on an important issue?!! You got it!

As Carrey explained on Twitter, “I did Kickass a month b4 Sandy Hook and now in all good conscience I cannot support that level of violence … my apologies to others involve with the film. I am not ashamed of it but recent events have caused a change in my heart.” Then, in a respectful blog post, which goes out of its way to praise Carrey’s performance in the flick, Millar retorted. The meat of his argument:

As you may know, Jim is a passionate advocate of gun-control and I respect both his politics and his opinion, but I’m baffled by this sudden announcement as nothing seen in this picture wasn’t in the screenplay eighteen months ago. Yes, the body-count is very high, but a movie called Kick-Ass 2 really has to do what it says on the tin. A sequel to the picture that gave us HIT-GIRL was always going to have some blood on the floor and this should have been no shock to a guy who enjoyed the first movie so much. My books are very hardcore, but the movies are adapted for a more mainstream audience and if you loved the tone of the first picture you’re going to eat this up with a big, giant spoon. Like Jim, I’m horrified by real-life violence (even though I’m Scottish), but Kick-Ass 2 isn’t a documentary. No actors were harmed in the making of this production! This is fiction and like Tarantino and Peckinpah, Scorcese [sic] and Eastwood, John Boorman, Oliver Stone and Chan-Wook Park, Kick-Ass avoids the usual bloodless body-count of most big summer pictures and focuses instead of the CONSEQUENCES of violence, whether it’s the ramifications for friends and family or, as we saw in the first movie, Kick-Ass spending six months in hospital after his first street altercation. Ironically, Jim’s character in Kick-Ass 2 is a Born-Again Christian and the big deal we made of the fact that he refuses to fire a gun is something he told us attracted him to the role in the first place.

Ultimately, this is his decision, but I’ve never quite bought the notion that violence in fiction leads to violence in real-life any more than Harry Potter casting a spell creates more Boy Wizards in real-life.

On the one hand, it’s easy to sympathize with Carrey: Most adults get squeamish or feel conflicted about the sight of extreme violence on a screen every once in a while, and knowing you were directly involved with propagating it must be tough to swallow. On the other: Come aaaahn, bro. Like Millar says, Carrey knew exactly what he was in for, and what that is is violence presented in explicitly cartoonish, outlandish fashion. And it’s hard to see how or why he’d want to couple that with the tragedy of Sandy Hook.

Ultimately, if Carrey is interested in moving forward with the “does movie violence lead to real-life violence?” conversation, that’s great. (Maybe just check with Tarantino before you get into it though?) Doing it like this, though, with apparently no advanced warning for his collaborators on the flick, feels a little petty and a little backstabby. Most likely, it won’t have any effect on the film’s box office; if anything, the tabloid pickup on this little kerfuffle might raise awareness. But it must leave a bad taste in the mouths of Carrey’s costars. When they made the movie, everything was cool. Less than two months before it comes out, and now it’s condemnable?