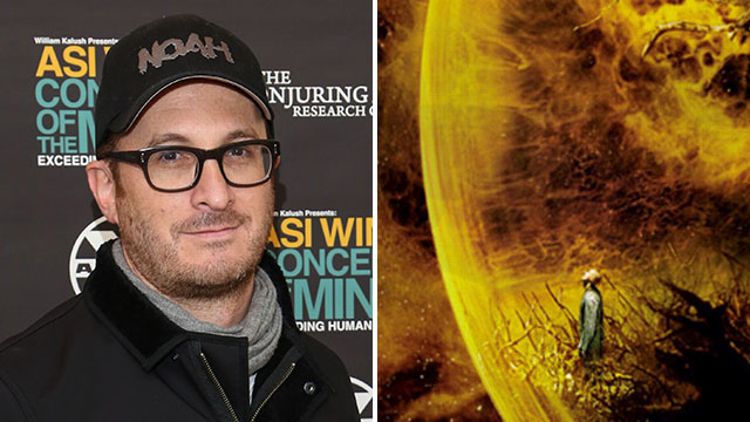 In the new issue of The Hollywood Reporter, Kim Masters goes in on Darren Aronofsky’s hugely anticipated Bible epic. How are things with Noah? Things are maybe not so good with Noah.

According to Masters, “In recent weeks, [Paramount] has held test screenings for key groups that might take a strong interest in the subject matter: in New York (for a largely Jewish audience), in Arizona (Christians) and in Orange County, Calif. (general public). All are said to have generated troubling reactions. But sources say Aronofsky has been resistant to Paramount’s suggested changes. ‘Darren is not made for studio films,’ says a talent rep with ties to the project. ‘He’s very dismissive. He doesn’t care about [Paramount’s] opinion’ … Paramount vice chairman Rob Moore says the film … is going through a ‘normal preview process’ and the result will be “one version of the movie that Darren is overseeing.'”

OK, first of all: “New York (for a largely Jewish audience)” — ahahaha, perfect.

It’s not too surprising, of course, considering the sheer mass of this project. Budgeted somewhere north of $125 million, it’s got an ark, a whole bunch of animals (all digitally created, some of them apparently “fantastical”), and, oh yeah, a world-ending flood (Industrial Light & Magic said its work on Noah involved “the most complicated rendering in the company’s history”). And we haven’t even touched on the fact that its source material is a book a lot of people feel pretty strongly about. Amazingly enough, Aronofsky is apparently tweaking the ending of the tale? Says THR, “a major challenge has been coming up with an exciting third act that doesn’t alienate the potentially huge Christian audience.” Jesus. The balls on this guy.

Which brings us to the other reason this isn’t too surprising: This is mf’ing Darren Aronofsky we’re talking about here. Lest we’ve all forgotten: The last time he tried to do big-budget epic, it was The Fountain, and it was one of the most infamous pedigreed-director flameouts in recent history.

Aronofsky’s first feature was 1998’s Pi, a scrappy black-and-white mind-fuck; his breakthrough was 2000’s Requiem for a Dream, an expansive, corrosive, violent mind–ass-to-ass. And then Hollywood gave him a bunch of money, and he made The Fountain, which was doomed from its first unveiling, a thoroughly booed premiere at the Venice Film Festival.

Here, the Guardian sums up the material nicely: “It’s not hard to see why The Fountain has proved so contentious. A hugely ambitious story about love and death, it defies easy categorisation. At its simplest, it is a melodrama about a scientist (Hugh Jackman) who can’t come to terms with the fact that his wife (played by Aronofsky’s [then] partner, Rachel Weisz) is dying of cancer … but this is also an action movie and a sci-fi film [featuring] Jackman as a hirsute, bloodthirsty 16th-century Spanish conquistador in Central America, trying to find the tree of life …[and as] a bald, 26th-century astronaut, looking more like Buddha than Buzz Aldrin, still trying to bring his beloved back to life.” In that same article, from 2006, Aronofsky shrugs off the hubbub: “Requiem got slaughtered by the press. We had a 30-minute standing ovation in Cannes and the next day Variety said I should go into therapy instead of making movies. The New York Times trashed Pi. I am totally used to it.”

And yet The Fountain‘s rocky reception wasn’t actually so easy to wave off. When Aronofsky did return, it was with the small-time heartache of The Wrestler. He’d gone small, in both story and production scale, and it paid off wonderfully, with Mickey Rourke’s Oscar-run redemption arc hooking in perfectly with Aronofsky’s own artistic rebirth. When the film won the Golden Lion at Venice, Rourke famously said, “Darren Aronofsky came here a couple of years ago and fell on his ass. I am glad he had the balls to come back.” Next was Black Swan, another modest indie that stormed the Oscars and somehow cracked $300 million worldwide.

Speaking about The Fountain years after the fact, Aronofsky found peace, admitting, more or less, that it was too expensive. “It was the film I wanted to make,” he’d say. “Of all my movies, to the people that are fans, it’s almost like a cult religion, they get tattoos and I’m constantly getting long letters from people saying it helped them come to terms with something. So I think it works for a much smaller audience because ultimately the film is about coming to terms with your own death, which is not a big commercial idea for a lot of people. The unfortunate thing about that film is it cost a lot of money to make, but is probably more of an art/experimental film than the budget it warranted.”

You’d think a guy who’d had so much success working small, and so little working big, might be fidgety about a Bible epic, right? But after the double-punch of The Wrestler and Black Swan — after having again proven he could do critically acclaimed DIY all day! All day, son! — Aronofsky allowed himself to dream big. And so now we have the $125 million Noah. Exciting, right? Anyone know how to get on this New York Jews sneak-preview list?