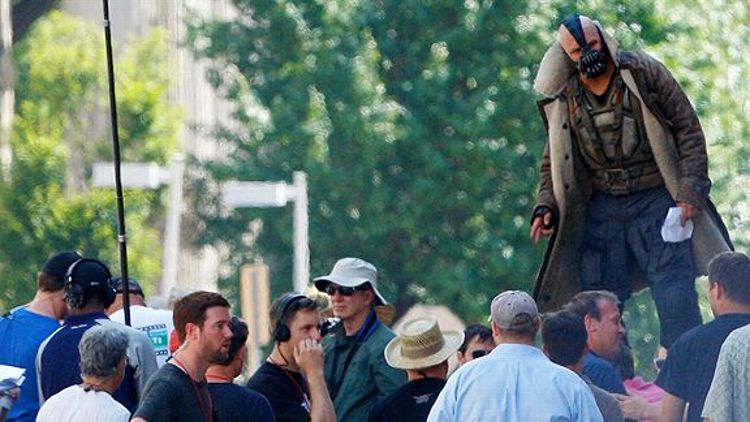 While pretty much any schmuck in the greater Pittsburgh area would probably be able to tell you everything there is to know about Christopher Nolan’s upcoming The Dark Knight Rises these days, the film’s cast can’t say a word — if they spoiled anything, the famously secretive Nolan would presumably have them killed. Awkwardly, though, nearly the entire cast of the movie is currently (or was recently) giving interviews in support of other movies, including Gary Oldman (Tinker, Tailor, Soldier, Spy), Joseph Gordon-Levitt (50/50), Anne Hathaway (One Day), Tom Hardy (Warrior, which is out today), and Marion Cotillard (Contagion, also out today). Since 2008’s The Dark Knight made like a billion dollars, reporters have to ask about Batman. So how best to avoid Nolan’s wrath? We’ve scoured the cast’s interviews for their five most effective tactics.

5. Kiss Christopher Nolan’s ass.
This is a good diversionary tactic because Hollywood actors love talking about how much of a genius everyone they work with is anyway, and Nolan actually happens to be pretty great. Here’s Gary Oldman not talking about Batman: “I thought Christopher Nolan had great imagination casting me as Commissioner Gordon [laughs]. That gave me an opportunity to do something I don’t think people had seen from me before.”

4. Patiently explain that you’re not allowed to talk about The Dark Knight Rises.
The honesty here is appreciated. Also, its pretty funny to hear rich, famous people explain that they’re “not allowed” to do something. Said Tom Hardy to Vanity Fair: “I’m under strict orders not to mention anything. Sorry.”

3. Talk about how crazy all the attention is.
In this interview, a reporter gently attempts to steer the conversation toward Dark Knight Rises but gets only Joseph Gordon-Levitt’s childhood memories of Batman and some stuff about how nice it is to be in a movie people are talking about: “I think that’s exciting and it’s cool that people are so passionate about it, they love — I love the character, I loved the character of Batman since I was a tiny little kid and probably you have too. It’s part of our culture and so it’s only appropriate that people care a lot about it.” Confused? Know nothing new about Dark Knight Rises? You’ve just been JGL’d!

2. Talk about your hot body.
Anne Hathaway’s preferred strategy: Discuss the movie only so far as it pertains to her strict training regimen. On Conan, Catwoman explained that all that all of her exercising made her lose her “badonkadonk” (this would be her greatest affront to Southern hip-hop culture if it wasn’t for the fact that, later in the same interview, she performed a rap song “in the style of Lil Wayne.”) She repeated the trick on Chelsea Lately, moving the focus again to her newly sculpted physique. Extremely sexy. Not very informational.

Trailers of the Week: A Dangerous Method, Fireflies in the Garden, and Human Centipede II