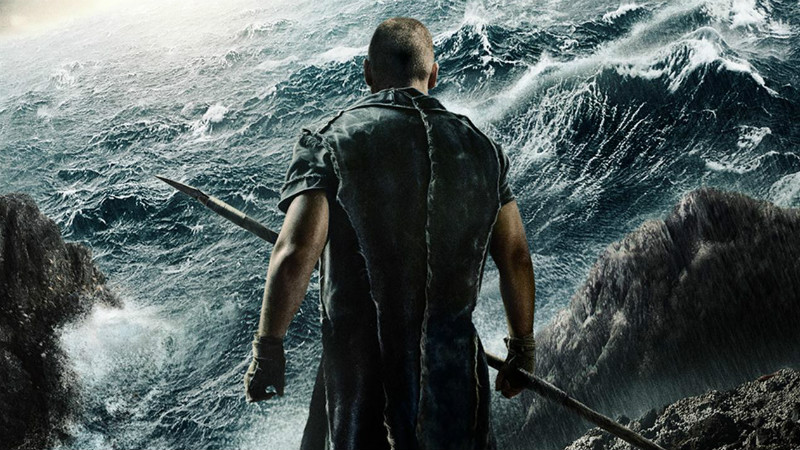 Make that a hat trick for Paramount. On three different occasions in less than a year, the peanut gallery of industry insiders has gleefully labeled an ambitious, big-budget film from that studio’s stables an incipient disaster (World War Z, The Wolf of Wall Street, and now Noah) and three times professional schadenfreude has come up short. World War Z scored a cool half-billion at the box office, The Wolf of Wall Street was nominated for Best Picture and now Aronofsky’s trippy Bible epic, which reimagines God as the ultimate eco-terrorist and Noah’s family as the Earth Liberation Font, topped the weekend box office. Given Aronofsky’s filmography — Pi, Requiem for a Dream, Black Swan — no one should be surprised he’d take Noah to the dark side of the moon. But when a scrappy little filmmaker from Brooklyn reconceives the Bible by way of J.R.R. Tolkien and gets away with it, you bet Hollywood takes notice.

Noah’s $44 million isn’t exactly manna from heaven — the movie’s modest goal at this point is to break even. Still, somehow Aronofsky forged an unholy (holy?) alliance between film nerds and more traditional churchgoers to create the film everyone’s talking about. I mean, when’s the last time a studio chief bragged about Nashville and New York in the same breath? Given the rough seas films face in getting our oversaturated attention, Aronofsky has Hollywood ready to find God. But mostly, they want to know how he did it. Here are some theories:

Every few years, Hollywood goes gaga when it wakes up and realizes the alien species known as the churchgoing public likes a night out at the movies, too. Hollywood creative execs still scratch their heads at the blockbuster bonanza that was The Passion of the Christ. But given that Mark Burnett could recut his Bible series into Son of God, release it in theaters and make nearly $60 million (and counting), this shouldn’t be one of the holy mysteries. To reiterate: People paid to see the CliffsNotes cut of something they’d already seen for free on cable.

Even the old studio chiefs knew enough to provide the moviegoing public with biblically inspired spectacles like Ben-Hur and The Robe. A personal anecdote: One of my first jobs in Hollywood was at a production company backed by a Bible magnate who bankrolled us on the condition that we occasionally made films with “spiritual themes” — think proto–Soul Surfers. These films were never the next Matrix, but they also almost never lost money, which was good enough that the studio give us cushy digs on the lot usually reserved for movie-star vanity deals and ’80s-era cocaine-vacuuming mega-producers. The point is, there’s a solid and relatively untapped audience just waiting to be served.

Almost as important as God: pre-awareness.

I’d argue Noah’s far closer to the Old Testament spirit of an irrational and vengeful God than many would like to admit; but naysayers seemed to hark on its wild divergences from the source material as proof of its inevitable collapse. But that criticism really missed the point: We all already knew the source material. In fact, part of the film’s thrill was seeing just how trippily Aronofsky had remixed everyone’s favorite Sunday school story.

The film makes a huge deal about how the descendants of Cain despoiled the earth in search of a rare resource; even rarer these days are universally familiar stories that Hollywood hasn’t already despoiled. It took Sony less than a decade to reboot Spider-Man; Marvel is mining the B-, C-, and D-lists of superheroes; and Warner Bros.’ Batman vs. Superman seeks to tap not only one but two exhausted comic-book veins simultaneously. The reason is, when we have the entire back catalog of Korean dramas available on Netflix, a million Instagram feeds to follow, and six seasons of Mad Men, we rarely pop our heads above the cultural fray to notice new stuff. Sure, that can be sigh-inducing on a creative level, but if you want to make money in movieland, it means that having people already know what you’re selling them really helps.

Predictably, Glenn Beck and the usual chorus of faith-based groups just itching to be offended ripped Noah before they’d even seen it, and continued to rip it after they had. But Paramount didn’t back down. Rather than cringe in fear, it embraced the controversy. With refreshing candor for a marketing department, the studio inserted a disclaimer about creative license similar to those “Inspired by a True Story” cards that lawyers insert in films to protect against libel.

But the point is, the studio didn’t run from the fight. And why should it have? There’s no such thing as bad press; and once again, in our digitally dominated age, fiery denunciations just end up being another way to get people’s attention. In fact, one of the few biblical misfires in recent memory, The Nativity Story, probably could’ve used more bad press: 10 percent more Temptation of the Christ could have meant boffo box office. However, one secret weapon that proved particularly powerful in Noah’s case: Russell Crowe tweeted the pope, and the filmmakers got an audience at the Vatican. Seriously, I’d love to see how Twitter handles that selfie. The point is, Crowe & Co. engaged the culture on all levels and said bring it on. Listen, if it works for Obamacare …

But the only thing they love more? Transformers. Don’t take my word for it; listen to Marky Mark. Mash those two up and you’ve got some big-budget catnip. I’m only being half-facetious. One of my personal takeaways from Tad Friend’s in-depth New Yorker article on the making of Noah was that Aronofsky had agonized so painfully over making sure every skull-crushing swing of his fallen rock angels’ limbs had the proper emotion to it. I can’t be the only one who read that and felt like Noah would be worth the price of admission just to check out those very-much-not-in-the-Bible battle sequences.

Then when I read that Darren Aronofsky had Nick Nolte all but in tears recording the voice-over, Noah instantly shot to the top of my must-see list. And I wasn’t disappointed. Aronofsky really hit a bizarre sweet spot with his Watchers — which, believe it or not, do have some biblical foundation in Genesis’s reference to the Nephilim. Cinephiles will love them because they look like Giacometti bronzes come to life, true believers because it will give them more angel mythology to wiki, and the rest of us will just enjoy watching Harryhausen stop-motion rocks beat the holy bejeesus out of the digital descendants of Cain.

Noah is far from a perfect movie; I’m not even sure it’s a great movie. But one thing is indisputable. Aronofsky put his manic heart and eco-nihilist soul into every detail-larded frame: a vegan Noah tripping on ür-shrooms; Ray Winstone biting the head off the Geico mascot; glowing snakeskin armbands; Emma Watson pregnant. It’s those little crazy touches that show a filmmaker really cares. Even if you think his take on the Bible is pure bullshit, you still can’t dispute it’s also pure brio. Even the movie’s critics — who’ve been pretty kind, actually — give Noah props for its crazy-eyed earnestness. We’re a little spoiled as moviegoers. There’s so much material out there these days, we expect every weekend to yield a masterpiece; but even the greatest filmmakers can almost never deliver that kind of consistency. Who wouldn’t want to churn out Black Swan with every swing of the camera? But no filmmaker can guarantee that, so the best defense is to go for broke, even if you come off like a madman.

And Paramount’s single savviest move may have been forgoing those enfeebled 80-minute recuts they so nervously commissioned. Granted, those versions apparently tested just as badly as Aronofsky’s cut; nonetheless, given that they’d sunk at least $130 million into the film — to say nothing of publicity costs — that’s balls. In its search for predictable success and crippling fear of failure, Hollywood achieves predictability more often than success. But then again, who watches the studio cut of Brazil anymore (aside from Criterion junkies)? The fact is, it’s a crazy industry that bets $130 million on a megalomaniac building two arks in Oyster Bay and dunking Russell Crowe in a water tank to make its daily bread. You have to be more than a little insane to survive, and crazier still if you think you can always perfectly read that most inscrutable of divine wills: the average moviegoer.