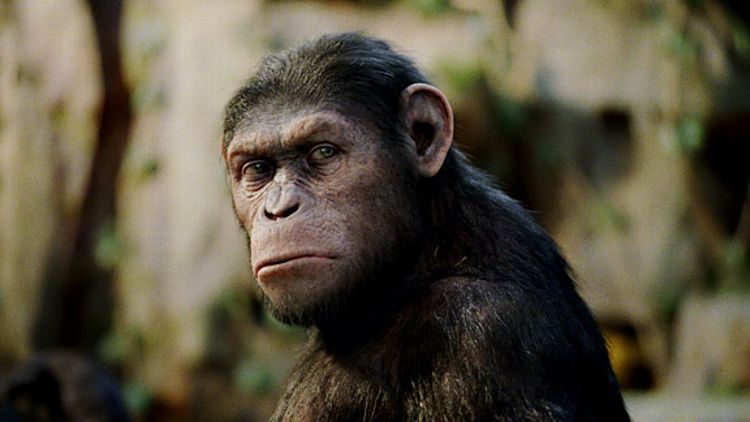 Rise of the Planet of the Apes rose right to the top of the box office over the weekend, shocking Hollywood and proving once and for all that America prefers animals acting like people to people acting like animals. How did a monkey movie with a laughable trailer and an oddball, animalistic Oscar campaign make $54 million in its opening weekend (a lusty $20m more than its own studio had predicted) and win over a nation of humanity-hating critics? Just as we do when things go shockingly wrong, we asked an agent, a producer, and a publicist just why and how things went surprisingly right.

What Went Right? Five Reasons Rise of the Planet of the Apes Succeeded:

1. They Deemphasized James Franco.
Following his comatose, critically annihilated performance at February’s Oscars (“Hard to believe that co-hosting the most watched show in the world can set back a guy’s career in a giant way, but he pulled it off,” said one prominent producer we spoke to), and disappointing returns for April’s Your Highness, even James Franco seemed to realize he’d become a liability: “Critics will be out to kill [Rise of the Planet of the Apes] and blame me for it just because they are out to kill me,” he told Playboy last month. So when Apes‘ Franco-centric first trailer landed with a thud — primarily because it’s becoming increasingly difficult to tell when Franco is acting versus when he’s “acting” — Fox’s marketing department recalibrated, shifting the focus to the movie’s digital apes. In the weeks leading up to Rise‘s release, motion-capture actor Andy Serkis — who “plays” the movie’s main ape via CGI but never appears on-screen in physical form — hit the publicity trail alone. Fox even mounted an absurdist Oscar push for Serkis, further deemphasizing the work of the film’s most prominent, nominally human actor. “It worked,” said a publicist. “They had really good commercials and the story was the hook. Not a star.”

But even if Franco weren’t so radioactive, this might have been a smart strategy anyway: Over and over this summer, audiences have rejected movies whose marketing centered on stars, including Larry Crowne, Zookeeper, Cowboys & Aliens, and this weekend’s The Change-Up, which put yet another dent in Ryan Reynolds’ movie-star cred. (Bumblebee, meanwhile, just signed a three-picture deal to be the new Love Bug in Disney’s Nolanized reboot of the dormant franchise.)

2. Surprise! It was good.
First the trailers tried to sell the movie on the premise of a monkey attacking a helicopter — only the most ludicrous example of a primate battling an aircraft since Bruce Willis drove a cop car into a chopper and lived to tell the tale. Then, Fox raised warning flags to full-mast by refusing to show Apes to critics until the last possible moment, a bad-buzz-avoiding stunt usually reserved for the Uwe Bolls of the world. But something strange and generally unfamiliar in Hollywood emerged from the preview screenings held last Wednesday: positivity. “A genial, untroubled take on the apocalypse,” smiled Manohla Dargis at the New York Times. “Thrills in artful fashion,” raved Time’s Richard Corliss before hunting down and murdering the copy editor who stuck the word “Chimpan-tastic” into the headline of the review. The only thing higher than the movie’s general critic score on Rotten Tomatoes (81 percent positive) is the audience’s (90 percent positive). “Word of mouth now travels at warp speed,” said one top agent. “It used to be you could open a bad movie on a Friday and still get good numbers on Saturday and Sunday. Now the buzz gets texted around the minute people leave the theater, so that can kill the rest of your weekend. But on the flip side, that is why you see good movies, like Planet of the Apes and Bridesmaids, overperform. I think Fox was genuinely surprised with both the reviews and box-office numbers for Apes.”

3. Timing Is Everything.
August is historically the time of year when blockbuster fatigue sets in — and when Hollywood execs go on vacation. Thus, the doggiest days of the summer are usually the dumping grounds for your Final Destination 5s and the latest unasked-for iteration of the must-be-pushing-30 Spy Kids. And yet Fox found the sweet spot between cinema’s silliest season and its most murderous month: By the first full weekend of August the noisiest hits (Transformers: Dark of the Moon, Captain America) had quieted and other studios were already air-mailing in their expensive towels in the form of reviled stinkers like The Change-Up. Coupled with the recent art-house success of the similarly monkey-fearing Project Nim and the skyrocketing international celebrity of Crystal, the cigarette-smoking capuchin from The Hangover Part II, Apes was in the right place at exactly the right time. “I give credit to the guys who picked the release date,” said our producer. “Early August gives you a much smaller summer window. But they had no competition for the weekend. Except for The Change-Up … right, no competition!”

4. It was cheap.
Rise of the Planet of the Apes cost a measly $93 million — chimp change compared to the budgets of this summer’s other major blockbusters. Even if it had failed, nobody would have lost their shirts. But with Apes‘ big first weekend, it’ll have a short journey to profitability. And by hiring an unknown director and low-wattage cast, Fox ensured that audiences would see Apes‘ budget on-screen — and not on its makers’ back ends (director Rupert Wyatt, Freida Pinto, John Lithgow, and even Franco work relatively cheap).

5. People Love Monkeys
Read Roger Ebert’s review of the original Planet of the Apes, written more than 40 years ago, and it’s hard not to be struck by déjà vu: He spends the first half of the piece recounting how most people he knows wouldn’t be “caught dead” seeing a film about bossy monkeys. The second half is about how much fun it is — and how there are already lines outside of his local theater in Chicago. Apes movies have been overanalyzed and richly rewarded since the LBJ administration, so it shouldn’t have come as a surprise that it happened again. Even Tim Burton’s “reimagining” (for the kids out there: That was our generation’s version of “rebooting”) of the original Apes in 2001 — now regarded as a disaster somewhere between the Hindenburg and The Hindenburg — managed to bank more than $362 million worldwide. Truly, we are a nation of part-time primatologists; put a gorilla on the screen and we’ll throw ourselves into the theater faster than an orangutan can throw its own filth.

Who Does Apes Help (or Hurt)?

1. James Franco
Since he lost top billing to a digital monkey, Apes‘ success won’t boost Franco’s stock too much. But even if it had failed, it’s not like he would’ve had to enroll in another grad school. “This wasn’t going to hurt him one way or the other,” says the agent. “Oz: The Great and Powerful will be the one to watch. It’s a very expensive movie with huge expectations, and he’s playing Oz, so his performance will be pivotal to its success. If the movie does a lot of business, he will get rightfully a lot of the credit, like Johnny Depp in Pirates of the Caribbean.”

2. Director Rupert Wyatt
On the other hand, Apes should pay off nicely for its heretofore unknown helmer. “When movies like this work, particularly reboots of movies of which the last version sucked, directors get the credit,” says the agent. “Like Christopher Nolan on Batman.”

3. Peter Chernin
Speaking of great timing! Apes was the first feature film from Chernin Entertainment, a new company founded by Peter Chernin after he left his job as Rupert Murdoch’s second-in-command at News Corporation in 2009. “Leave it to Chernin to get it right,” says the producer. “First he makes the genius move to leave News Corp, which was like bailing out of the Titanic. Then his new company comes out of the gate with a sneaky big hit.” Our agent concurs: “He is rightfully thought to be the best media executive in the business, and this will only add to his luster.”

4. Motion Capture.
Crystal, enjoy those smokes while you can still afford them. Apes won PETA’s endorsement by eschewing animal actors in favor of spandex-clad human ones, whose movements were recorded by computers and mapped onto digital primates. “I think this means you’ll see more motion-capture,” said our agent. “I wonder how the success of Apes makes Robert Zemeckis feel,” says the producer, “after his endless series of motion-capture disasters — Polar Express, Beowulf, A Christmas Carol, Mars Needs Moms — lost millions and led to the shuttering of his studio.” So does this mean the gravy train is over for animal actors? “Oh definitely,” said the publicist. “And human actors aren’t far behind. Remember that movie S1mone? It stunk, but it might have been way ahead of its time. Also, I am going to miss the ‘No animals were hurt during filming’ disclaimers.”

5. Andy Serkis’ Oscar Chances
Despite a seemingly earnest Best Supporting Actor campaign for Andy Serkis’ motion-captured performance as Cesar, Rise‘s lead ape, our panel of experts says not to expect to hear his name called at the Kodak Theatre next February. “Andy has no chance at a nomination,” says the agent. “His odds are slightly behind Harry Potter‘s chances of winning Best Picture and slightly ahead of Tom Hanks’ for winning Best Actor for Larry Crowne,” says the producer. “But if he does get it,” says the publicist, “he should show up in an actual monkey suit.”

Andy Greenwald is an author and screenwriter in New York. He covers pop culture for Grantland. Lane Brown is an editor at Grantland.