‘Dawn of the Planet of the Apes’ Trailer: Caesar the Monkey-Rebel’s Oscar Campaign Begins!

Nearly three years ago, we here at Grantland stood in front of you and made a bold declaration: The time for the mo-cap Oscar was nigh! “We’re talking about the stuntmen, dancers, extras and people with bad teeth who every day don form-fitting Lycra without complaint to bring quasi-life to the motion-captured, CGI creatures that populate modern blockbusters,” our man Andy wrote. “The flesh and blood behind the fake flesh and blood of uncanny, otherworldly entities like Paul, the entire cast of Green Lantern, and the artist formerly known as Nicole Kidman’s forehead. Finally, we’re pleased to report, these undersung heroes have a champion: Andy Serkis.”

At the time, Rise of the Planet of the Apes hadn’t even hit theaters, but advanced word on Serkis — who played Caesar, the ever-charismatic leader of the hyper-intelligent monkey uprising — was so positive it led us to Photoshop artwork featuring not one but two monkeys holding Oscars. Looking back now, it’s easy to forget that Rise was at one point considered another ill-conceived reboot for a franchise the young’uns couldn’t care less about, and so a sure misfire: Instead, the flick did nearly half a billion in international box office, and a nation of film critics more or less lifted Serkis onto their shoulders in elation. (He was so good, you straight up forget that James Franco and Freida Pinto were even in that movie.) And yet, when the Oscar nominees were announced that year, Serkis’s name was cruelly left off the ballot. To this day, that defeat still stings.

But our efforts were not for naught! Three years later, here comes Dawn of the Planet of the Apes, an even more epic allegory for fraught times and clashing civilizations — and a shot at redemption. As the first full trailer, above, shows, we’ve moved into the future, where a ragged band of human survivors (of the virus unleashed in the first movie) and an ascendant ape civilization, now living freely in their beautiful home in the woods, must decide on peace or war. Everything looks so good, and I could really geek out for a while (they’re on horses! The apes are on horses!), but let’s focus on the important stuff: how rad it’ll be when Serkis huffing “Apes! Together! Strong!” gets played during his Best Actor nominee showcase bit at the Oscars. Because, come on now: Three years later, you need look no further than Scarlett Johansson’s accolades for Her to know that progress has been made in our understanding of what “acting” is, can, and will be. And so we stand, again, to declare: Let the age of the mo-cap monkey Oscars begin! 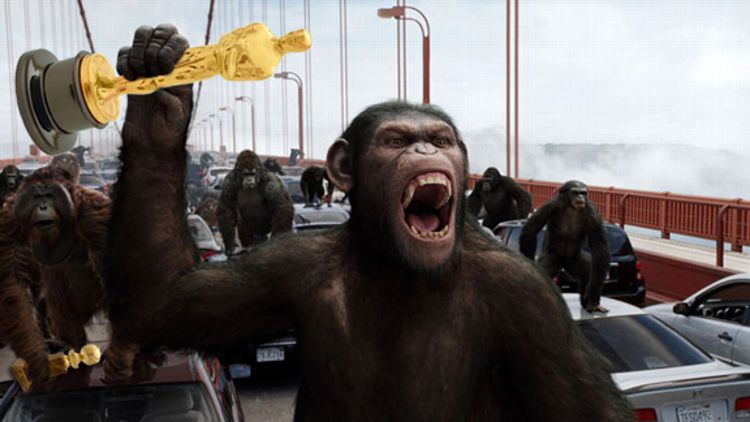 Filed Under: Trailer of the Day, Movies, dawn of the planet of the apes, Andy Serkis, Trailers

Master P, His Wife, and the First Time I Saw Cocaine

‘The Blue Album’ at 20: Looking Back at Weezer’s Debut, Track by Track