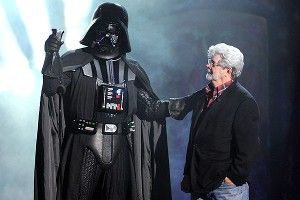 Getting married! THR reports that Lucas is engaged to his girlfriend, Mellody Hobson, who’s he’s been dating since 2006. Hobson, 43, is the DreamWorks Animation chairman, runs investment management firm Ariel Investments LLC, has contributed to Good Morning America, and once hosted an ABC show called Unbroke: What You Need to Know About Money. Lucas, 68, invented Yoda.

“When they started going together,” Al Sharpton told me, “it was like he had started going with black America’s business princess” … When I asked about Hobson, Lucas said, “I’m a ’60s, West Coast, liberal, radical, artsy, dyed-in-the-wool 99 percenter before there was such a thing.” (He was referring to his upbringing rather than his reported $3.2 billion net worth.) “And she’s an East Coast, Princeton grad, Wall Street fund manager, knows all the big players, works in the big world. You would never think that we would get together, have anything in common. But when we did, we realized we had everything in common. It was the most unlikely coupling.”

No word on where or when Lucas and Hobson will get married, but don’t think because George just made $4.05 billion selling Star Wars to Disney that it’ll be some super-lavish affair, as Lucas has already said he’s earmarking most of that money for an education fund. Meaning: If George Lucas wants to go swanky, he’ll be forced to use some of the billions he’d previously made off of Star Wars.

Afternoon Links: Hate-Smashing, The Hobbit on Mushrooms, and a Micturating Shirtless Werewolf