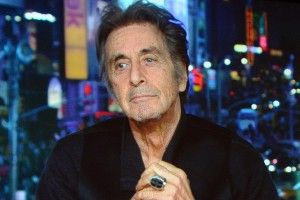 On a certain level, this whole Al Pacino as Phil Spector thing could have ended with this one indelible, delectable image right here: Helen Mirren, doing her best not to audibly grumble out, “WTF, didn’t I win an Oscar, like, six years ago”; then a couple of blurry, anonymous extras, lucking out into a Facebook-profile-photo-for-life; and, finally, Pacino, in all his pucker-faced, late-stage, “no fucks given” mania, rocking that mad-man Spector ’fro-wig like he was born to do it.

And if HBO had then said, after releasing this still, “OK, we’ve all had our chuckles, but this has gone far enough,” could you have really blamed them? But no! Pushing boldly forward, they’ve actually shot and edited this thing, and will, on March 24, present it in full. Phil Spector was written and directed by David Mamet and produced by Barry Levinson, but, truly, the only thing you need to know: It stars Al Pacino, letting himself foam at the mouth with great glee and delight (“I’ve played this game a million times before! I know how the game is PLAYED!!!”) and, at least according to this trailer, it appears to be sporting an average of one nutso Spector wig per scene. Enjoy!