Hashtag TrueDetectiveSeason2: Colin Farrell’s in Talks to Join the Show 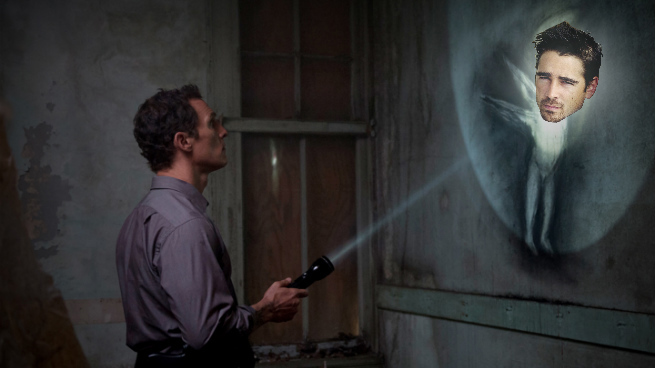 If it feels like just yesterday that some loose-lipped HBO executives told a room full of greedy TV reporters that news about True Detective’s still-shadowy Season 2 cast might be forthcoming, well, it was only yesterday. We may have already done a complete revolution on the flattened casting news time-circle, because various Hollywood trade papers are suddenly reporting that one Colin Farrell, the muttering coal-eyed mystery-imp coming off mediocre work like Winter’s Tale, Saving Mr. Banks, and, of course, the totally unnecessary Total Recall remake, is in talks to join the California-set next installment of the show.

OK, so that’s potentially one of three (or four, depending on if you trust anything Nic Detective says at this point) major roles out of the way. So that stilll leaves us room for … Brad Pitt and Jessica Chastain. (Of COURSE we believe the rumors! Who doesn’t want to see Brad and Jessica on HBO? Keep insane hope alive!) And let’s hold that possible last spot open for LeBron James, because there was no way we were getting out of a story about the tortured, obsessively discussed transfer of superstar talent without squeezing his name in somewhere. He’s gonna make a great gumshoe. Never bet against that dude surprising you.

'The Strain' Preview: Will FX's Viral Vampire Series Infect or Repulse You?