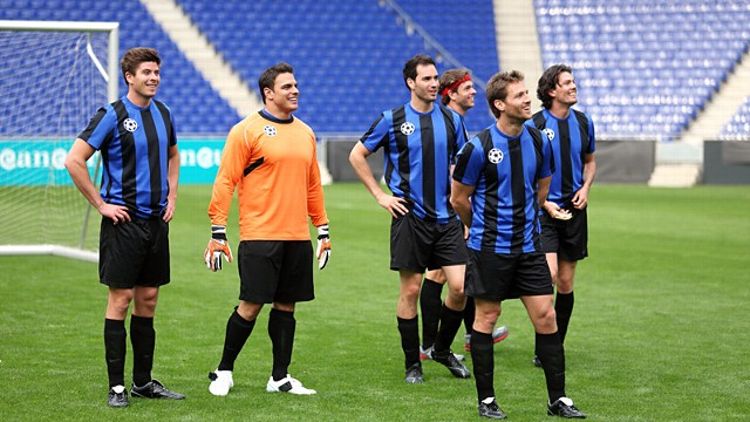 Barcelona, previously known for all the Gaudí architecture and its popularity with American undergrads, will now be remembered as the city where James tried to counter-accusate. Drew and Kasey finally told Des about the wrong-reasons conversation between Mikey T. and James. Des was forced to question everything about James and even began resenting the guys for burdening her with the truth. The guys spent their down time sitting very close together in various communal spaces, worrying about or arguing with James. Nonetheless, Des wouldn’t let the drama derail her quest for love. Barcelona also appears to be the home of the street makeout and women’s cropped leather jackets.

Why he’ll win: Because Des took him to her room in the middle of the group date. Chris’s rise has been swift and breathtaking, and all of the other guys should be terrified. In the middle of the group date, Des leads Chris away from the group, explaining, “I need to show you my room!” Unless you are trying to sell your home to Chris, or your room was just remodeled, you definitely don’t need to show him your room. It’s not even really your room, Des. Then, while lying on her bed, she read the (rhyming!) poem that she had written for him, matching Chris’s gift to her last week. If Chris doesn’t win this competition, there is no hope for the future of arts and letters in our society.

Misgivings: He has made up something called the “Chris and Des Love Scale.” Sure, that’s cute. Maybe he can use it in a poem. But it’s also uncomfortably close to Real Housewives of Orange County‘s Vicky Gunvalson’s Love Tank. I’m not sure Chris wants to be in this kind of metaphorical company.

Why he might make the leap: Because this was his game to lose. In my mind, Chris is the Paul George upstart while Brooks is the LeBron James of this competition. For all that Chris has on his side (poetry, athleticism, that slanted smile), Brooks has the best personality in the group. His jokes are cheesy, but that’s basically a prerequisite for this show, and at least they’re still mildly entertaining. Even though he didn’t get a trip to Des’s bed, they did lounge on a bed-like platform surrounded by pillows. That’s good enough positioning as they head into the final five. Hey, it’s not Brooks’s fault that he got a one-on-one date so early on in the season, thus denying him screen time in the middle weeks. I believe in you, Brooks.

Why he might make the leap: Because he really likes kissing in the most dramatic way possible. After five episodes of minimal contribution, this was Drew’s week. He got the first one-on-one, and he used his time to kiss Des as passionately and as frequently as possible. It began with making out, and it should have ended that way too. Drew interrupted their dinner to grab Des and run away from the cameras. After running approximately 30 yards, they stopped in an alley. Drew threw her up against the stone wall for a very intimate setting. That would have been a comical and appropriate end to the date. It definitely would have earned him the rose, and a dramatic kiss in the streets of Barcelona would have been a good story. But no. Drew immediately followed up the kiss by telling Des that James is not here for the right reasons, and thereby ruined his own date. If you had to wait until Week 6 to get some alone time with Des, why would you spend any portion of it talking about another dude? Why, Drew, why? Sometimes the pursuit of truth must be sacrificed, and that time is on The Bachelorette.

Why he might make the leap: Because Zak is his own spirit animal. Zak was the recipient of the second one-on-one date, which began with some drawing. First they drew a random male model and then they drew each other. It was boring. Then, to spice things up, a nude male model came in and they drew him. Zak has never known a naked situation he didn’t want to be a part of, so Zak leaves the room, only to return in a robe of his own. He kept his underwear on, but he succeeded in escalating his reputation from “the shirtless guy” to “the naked guy.” As on Drew’s date, they also had a secluded dinner in a dark open space. Zak admitted that he doesn’t know how long his parents have been married, but he makes up a number large enough to impress Desiree. He, too, engages her in a stone-wall kiss. He kept his clothes on, made no reveals, and got a rose. Congratulations on a successful week, Zak!

Please Save This Guy From Himself

Saving Grace: We need a right reasons police. I really wanted Michael G. to go this week. Enough with the misuse of legal terminology! We get it, you’re a lawyer! Even though he didn’t hear James’s alleged comments about other girls and boats and Chicago, Michael G. filled the Ben-less void by participating in the anti-James crusade. He accused James of liking clubbing and Jersey Shore too much. Perhaps Michael G. is residually jealous of James’s date in Atlantic City, but what is his problem with Jersey Shore? He may be headed to Madeira, but the most confrontational contestant is not likely to win a dating competition.

JAMES
I was disappointed to see James go. His dedication to real talk proved too real. After some initial equivocation, James settled on a pragmatic defense. He explained that Mikey T. knew he’d be eliminated soon, so he was “self-medicating” with his ideas about girls and boats and Chicago. James was just trying to make his pal feel better by going along with the delusion. James made some valid points. He was still just one of eight, and even if he won, he probably won’t end up with Desiree forever. Why shouldn’t he plan for his future? It’s a smart strategy on two levels: (1) It’s a high-concept take on playing hard-to-get, and (2) although he apparently co-owns a business called Fluid Life International, I cant find any information on it. We shouldn’t hate James for playing the game. We should feel sad for him because he was probably banking on getting a spot in the Bachelor Pad. Maybe next year.

JUAN PABLO
The elimination of Juan Pablo is a defeat for non-American football. How could the former professional soccer player get eliminated on a week with a soccer challenge? The group date activity was a soccer game. They played against Des and an unnamed, silent team of women soccer players. With no information about the women’s team available, I am going to assume that Juan Pablo should have led the guys to victory. Even though James seemed like the worst goalie possible, I would have eliminated Juan Pablo this week, too. If you can’t at least show off during the soccer game, what’s the point?

KASEY
We’ll always remember Kasey as the guy who can’t tolerate counter-accusating. He went down fighting the good fight, defending Des and the right reasons. It was an honorable quest, but snitches don’t win. Drew should be concerned.

The Firm 20 Years Later: What Ever Happened to Hollywood's Obsession With Legal Thrillers?