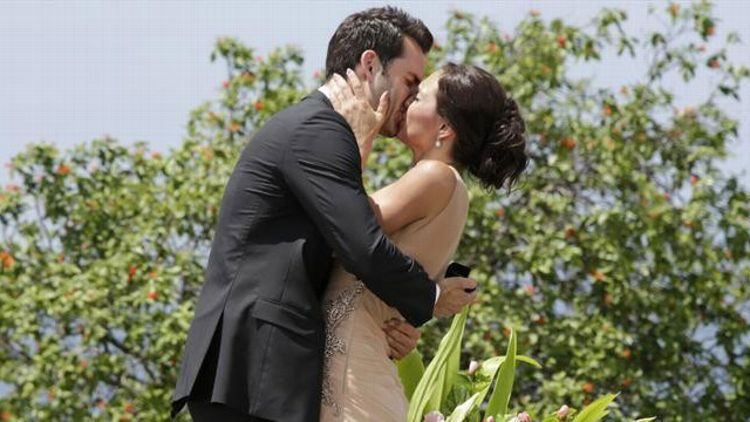 Watching any reality show is an exercise in suspending disbelief. Anyone who ever watched the dailies that MTV used to post from Real World knows that life is not exciting enough to sustain a TV narrative. The Bachelor and Bachelorette franchise may require the most from its audience because the premise is abjectly absurd. Who dates 25 potential spouses simultaneously over the course of just 10 weeks? We all accept that these shows are not really real, but because all bachelor(ette)s and the contestants go on the show looking for the same thing, they’re primed to find each other. After awhile, I hear, the participants forget that the cameras are around. Maybe there’s some truth there.

You know what’s not believable at all? That a few days after falling into uncontrollable sadness over a breakup, Desiree would be ready to enter into a serious relationship with someone else. How could Des be ready to love Chris? It’s absurd — too absurd. At the top of the show, Des sits down with Chris Harrison to go over how she was feeling and what she wanted to do next. Even though Harrison stayed mostly silent, as far as we could tell from the edit, Des had a change of heart. She went from wanting to go home to deciding to go on with the rose ceremony. What didn’t we see that made her change her mind?

We can only assume that Des accepts Chris’s proposal because she was blown away by their date together on the catamaran. But wait. Des was supposed to ride a catamaran to a private island with Brooks in last week’s episode. So not only is Chris the consolation prize, the date was repurposed for him! Nonetheless, they did the obligatory hand-in-hand jump into the ocean and gazed dreamily out at sea. It did look nice. Later, they reconvened at Chris’s cottage, and while we only see one glass of champagne in Des’s hand, I know drunk crying when I see it. We should all know drunk crying from Des since we’ve seen so many of her tears. Let’s thank the champagne for providing the most critical moment of the episode. Des weepily explains that she “never felt like anyone has ever loved me as much as I have loved them. And I think that’s why it’s hard to feel so loved because I don’t know what it feels like … I feel guilty. How could I not have loved him from the beginning?” So there you have it. Des chooses Chris out of guilt and appreciation for how much he loves her (and maybe because he’s sweet and handsome, but those are lower on the list). We also need to thank the background piano music for being nearly effective enough to distract us from the fact that last week she was crying over Brooks.

All we can do now is look back in anger. Were the signs there? If one thing remains true about this franchise, it’s that whoever seems like an early front-runner probably will not win it all. Still, there were a few indications that Chris would be the consolation prize one.

Even if Des picking Chris is ridiculous, hopefully they will be happy. They need to outlast Emily and Jef’s relationship while aspiring to the seven months and counting of Sean and Catherine. All we’re left with is five long months until The Bachelor returns. Until then, have fun looking at Chris Siegfried’s modeling pictures. You can’t un-see the one with the scarf.

Looking Back on 'The O.C.,' a Decade Later