Looking Back on ‘The O.C.,’ a Decade Later 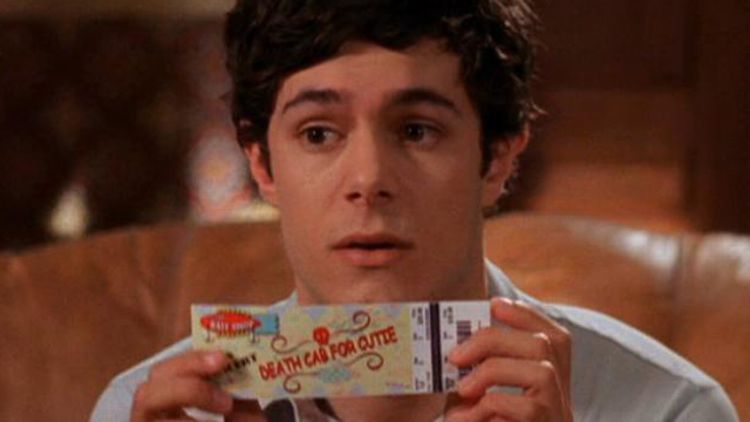 I’ve long believed that every generation gets the teen soap opera it deserves. So why were a bunch of adolescents who would spend the next decade Snapchatting kitten GIFs to each other lucky enough to get The O.C.? When the show premiered in the doggiest days of late summer in 2003, it was still possible — no, inevitable — to link it to cultural ancestors 90210 (which had long since gone from hip to hip replacement by the time it creaked off the air in 2000) and Dawson’s Creek (which had ended, soggily, just months prior). At first blush, the Fox series appeared to be little more than a canny, potentially cynical cross-pollination of the two. Like 90210, The O.C. presented an aspirational vision of California that positively glistened with spray-tan excess — this was, after all, the height of the Cribs era, a time when pool houses were expected to be seen, not merely heard about. But it also sped up Dawson Leery’s metatextual bleatings until the self-aware dialogue was bouncing back and forth faster than a Ping-Pong ball in Beijing. The O.C. seemed to tick all the boxes for weightless hot-weather indulgence. It was shiny, it was white, and it was empty, just like the puka shells wrapped around the thick neck of Luke, its catchphrase-spouting, Aryan antagonist.

Except it wasn’t. (Well, OK. It was pretty white.) From the start, The O.C. was quicker, fresher, wittier, and just plain better than it had any reason to be. Ostensibly the story of Ryan Atwood, a mumbling proto-hunk from the shaky-cam mean streets of Chino who is adopted by the well-intentioned, well-to-do Cohen family of Newport Beach, The O.C. quickly revealed the bleeding heart lurking beneath those Botoxed brows. This was a soap opera, sure — it broadcast its intentions in that department the moment doe-eyed deer-in-headlights Marissa Cooper bummed a smoke off of her monosyllabic new neighbor — but it was also a fascinating comment about smart and sensitive people suddenly finding themselves trapped in a soap opera. Ryan-as-outsider was the early hook, but the show was actually about passing and a surprise integration of a totally different kind.

Creator Josh Schwartz — who was, at 26, the youngest showrunner in prime time — knew as much about actual grand theft auto as he did about debutante cotillions. But, as a snarky, sun-averse Jew splashing around in the shallow part of Hollywood, he knew plenty about feeling self-conscious and out of place and about how the golden California dream can feel like pyrite for those who don’t naturally look the part. And so the core of The O.C. wasn’t all bedazzled Havaianas and ozone-trampling Escalades (though they were certainly in evidence). The core of The O.C. was about protecting the fragile Cohen household — led by Peter Gallagher’s liberal lawyer Sandy and his warm shiksa wife, Kirsten, played by Kelly Rowan — from the cynical creep of commercialism and spirit-deadening cushion of privilege that surrounded it on all sides. Unlike the 90210s and Melrose Places that preceded it and the arch and vicious Gossip Girls it begat, The O.C. celebrated idiosyncrasies and square pegs; its setting was as much a trap as an escape. Schwartz put bagels and cream cheese onto Orange County’s perfectly polished granite countertops and hoped they wouldn’t spoil in the heat.

Now, is this too much heavy pondering for a show that brought us Christmukkah, Princess Sparkle, and Volchok? Probably. But overthinking things is what Seth Cohen did best. In our current moment, when The Big Bang Theory is the most popular show on television and “The Age of Ultron” is something that non-longbox-owning humans care about, it might be hard to remember how groundbreaking Adam Brody’s character truly was. Here, at last, was the skinny nerd as co-lead, not comic relief. The Seth-Summer relationship was every ’80s comedy in reverse: the outcast who pined for the popular girl and wound up turning her into an outcast too. It was as if John Hughes had finally gotten his act together and made a movie with Duckie as the star.

Through Seth, The O.C. quickly began to filter in his creator’s own sensibilities: mixtapes filled with plaintive indie rock, care packages lined with ’80s nostalgia bombs like The Goonies and novels by high-minded otakus like Michael Chabon. It’s almost sweet to remember how big a deal this seemed, when a mainstream Fox teen show deigned to take notice of a bubbling underground. (Eventually, by the time Seth and Ryan started hanging out at the Peach Pit After Dark Bait Shop, the show had cannonballed right in.) Seth’s full-throated advocacy helped nudge would-be wallflowers like Death Cab for Cutie and the Shins to the top of the charts and gave skinny would-be Lotharios everywhere an eminently less punchable face to present to the larger world.

What’s funny is that now it’s The O.C. that seems like an obscure relic. The rise in micro-targeted scripted programming and the cavernous drop in broadcast ratings meant that all four of the major networks backed away from youth-centered programming as quickly and decisively as the way Schwartz and his writers scrambled away from Oliver Trask. The O.C. won deserved kudos in the early going for making the adult plots as compelling as those featuring the kids, but that sort of broad-canvas storytelling is now as outmoded as Friendster. Aside from throwback aberrations like Parenthood, so-called grown-up shows are generally uninterested in the intentions of young people and vice versa. Teen-centric soaps have been pushed to the margins of the dial, where Schwartzian warmth and cleverness has curdled into something sour and biting. (Even Schwartz’s own Gossip Girl barely had humans at all, just well-dressed knives.) At its worst — hell, at its best — The O.C. could be plenty cheesy. But, you know, there’s Camembert and there’s Velveeta. It was nice for a time having a choice between the two, let alone knowing the difference.

If this all sounds a little personal, that’s probably because it is. A decade ago, back when I wrote about music for a living, The O.C. was the first television show that I engaged with professionally, first phoning up Adam Brody for a sidebar on a Death Cab for Cutie feature and then successfully pitching GQ on an article about the self-effacing East Coaster one year my senior who had somehow created a phenomenon. My first set visit was to The O.C. in the summer of 2004. When I arrived to the show’s Manhattan Beach studio, production for the second season was in full swing and the hype was at a level The O.C. would never repeat, nor recover from. Like all rookies, I remember being surprised at how artificial the view out of the Cohens’ kitchen window looked up close and how, when the stage lights were off, it was impossible to avoid the thin layer of dust that coated everything in Summer’s bedroom. (Which, thanks to the mazelike logistics of the studio, was located just around the corner from Seth’s.) I was used to the opportunistic but honest confessionalism of the emo bands I had been covering, so I was unprepared for the thick coils of spin that surrounded everything I saw and heard as I was led into one office and gently nudged out of another. Adam Brody schmoozed me. Mischa Barton ignored me. And, in the background, Peter Gallagher’s impossible eyebrows rose and fell and rose and fell, beckoning like the Cohens’ infinity pool.

To help set the mood, the Fox publicists set up a bromantic date for me and Josh at a Hives concert. (Again: It was 2004!) We got along so well we ended up hanging out a second night, one that ended very, very early in the morning. Everyone I spoke to for the story over the age of 30 was clamoring for more of “the Josh Schwartz voice,” but the person in possession of said instrument seemed less and less inclined to use it. Instead, Josh struck me as a perfectly reasonable 27-year-old in that he was more interested in hanging out with his contemporaries in the cast at Coachella and planning his next show, a darker, more personal series called Athens, than steering the cruise ship he’d unwittingly created. (“I’ve never had someone so close in age that was such a good friend also be my boss,” Brody enthused to me at the time, unwittingly identifying nearly every problem that was to come.) After I flew back east to work on the article, the second season of The O.C. premiered to less-than-stellar notices and my story about the industry’s golden child suddenly seemed out of date. In February, I flew back to L.A. for a rewrite and found Josh chastened and recommitted. (Athens had morphed into Pretty Things, an O.C. spin-off the network wanted all along. Neither made it to pilot.) He was going to bed earlier and going into the office regularly again. He’d bought a house and found a girlfriend. “I was flattered that everyone was saying I was a ‘wunderkind,’ but there’s a ticking clock on that,” he told me then. “You don’t want to be the child star that didn’t grow up so cute.”

The Frankenstein story I cobbled together out of those trips for GQ never ran, and Josh’s renewed focus led to … Season 3 of The O.C., largely recognized as the series’ low point. In fact, much of what was great about the show was limited to that first season. By the time Schwartz and his series regained their footing in Season 4, the buzz had long since moved on. Josh and I have become friendly since my story was killed (and we worked on a web series together back in 2008), a fact that I’ll admit colors my critical faculties. (The Carrie Diaries is surprisingly good and you should really give Fun Size a chance!) And he and I have talked at length about how that period taught us both valuable lessons about television — although, to be fair, his were a bit above my pay grade. It was a rough, if ridiculously well-compensated, education for him, being forced to figure out on the fly the difference between being a writer and being a showrunner, between having a voice and knowing what to say with it. At the time he and I talked about the two industry paths available for people like him, the Scribbling Savant (David E. Kelley, Aaron Sorkin) or the Empire Builder (John Wells, Steven Bochco). It’s telling that Josh’s extremely successful company, which has multiple shows on the air and in development and has branched out into film, is called Fake Empire. (One of the things it says is that Josh still thinks with his iPod.) California, there he went.

The O.C. was a show, and an experience, about growing up — especially behind the camera even as things were falling apart in front of it. Now that I write about TV full-time, I often think of that first set visit as a reminder that everything on the air is personal to somebody, even if the specific material isn’t, and that much of what we fall in love with on TV is really just the hope and promise of beginnings. On soap operas, as in real life, the start of something is always brighter and better than the eventual slow fade of endings. What unites those who make television with those who watch it is just how cruel and great the medium can be, often at the same time; how it greets you with a smile only to inevitably punch you in the face. Welcome to TV, bitch.

Filed Under: TV, The OC

Grading the Top 10 Comedy Songs in the U.K.!