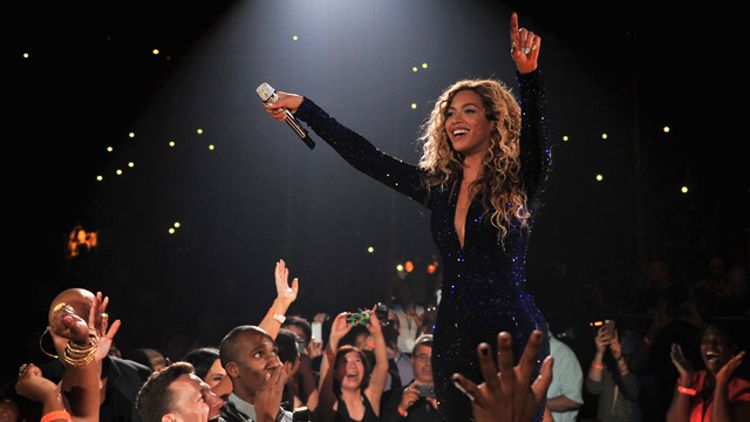 Last we heard, Beyoncé was having problems. “I think she scrapped the record,” Diplo told the Sun in July, about the highly anticipated follow-up to 2011’s 4. “The record was supposed to be done and they have been hitting me up for brand-new ideas.” And before he even had a chance to clarify, a full damning report followed: “Beyonce Scraps 50 Songs Amid Endless Album Delay,” The Hollywood Reporter’s online headline screamed.

Word was Columbia Records had hoped for the album in spring, then the fall; now, it wasn’t even publicly discussing a timeline. Just today, it seemed the stagnation had reared its ugly head again: “Grown Woman,” the track understood at one point to be the probable lead single from this theoretical forthcoming album, reappeared in finished studio form — and then, seeing that the SoundCloud stream has been unavailable, has apparently leaked back off the Internet.

In its report, THR delivered the news grimly: “It wasn’t initially the plan to take a singer around the world for an ambitious eight-month trek … while trying to juggle time in the studio. In turn, the label is getting increasingly more anxious as it looks back to the costly 2011 album, 4. … Beyoncé was given nearly complete autonomy over the finished product, which also was her first release since excising her father, Mathew Knowles, from her business dealings. 4 was her lowest seller at 1.4 million copies .… and it failed to produce a buzzy pop hit.”

So, yeah: If you wanna listen, there are people ready to tell you Beyoncé is having problems. And then there’s Beyoncé herself, able to wave off — with as little as a fleeting sight of that winsome beaming grin — any and all notions of problems as nothing more than the sniveling ravings of the dementedly craven. Which is to say this: On Saturday night Beyoncé played Brooklyn as part of the Mrs. Carter Show World Tour, and the only way I’d really want to describe it is as magnificent, spectacular, huge, hard-as-hell and somehow still self-aware, and therefore completely perfect. This is going to be thin on such trifles as “facts,” either because (a) actual details are superfluous, or (b) I was a little too amped to remember to take notes. But let me just point out that, because Beyoncé was spotlit most of the night, taking photos of the woman proved difficult; in most shots, she’d just show up as an ineffable glowing orb of light. And, well, that seems about right.

I do remember that the energy at the Barclays Center was just about palpable: It was that particular “I expended an inordinate amount of energy just to be able to spend unthinkable gobs of money to get here, and nothing short of the devil’s own hell-beasts will stop me from having the best night ever” kind of vibe. At one point, before things got going, the DJ dropped “Wobble Baby,” and these attentive maniacs in attendance just about wobbled the damn place to the ground.

Then the curtain drops, and there’s this video of Queen Bey, in regal pancake makeup and the giant Marge Simpson wig, marching down some kind of white nothingess — with a whole extremely good-looking crew of pages and grandmasters of the hunt and ladies-in-waiting — in order to be crowned. And then she actually comes out and kicks in with the shoulder-shakes on “Run the World (Girls),” and then the fact that we’re in the same room with Beyoncé, actual human person, is enough to get everyone all kinds of riled up.

The impressive thing, then, is maintaining that. To that end, the elaborate costume changes are impeccable; the full-force body-blow choreography and the blooming plumes of pyro are working extra hard. But the little bits when Beyoncé communicates are just as crucial. They are delivered, just like everything else, on cue, and with great efficacy.

On “Flaws and All,” as to demonstrate her point, Beyoncé swipes at her underarm flab; it jiggles more dramatically than I honestly ever would have guessed, and is therefore all the more greeted with joyful squeals. Later, she brushes up a bit close to a stage prop and nods to the infamous incident of Beyoncé vs. The Fan: “You better move that fan away from me!” And when she works the crowd — she asks us to say “heeeey mzzzz Carter,” and then she asks us to say “heeeeeeeeyyyy mzzzzzz Caaaaaahter” — it’s with a calculated rasp that’s certainly sexy, but also sweet, and, dare I say, almost maternal? Whatever it is, what it adds up to is that it’s hard to imagine a performer more in control of her audience.

By the time she has flown over our heads, in a sparkly bodysuit, to do “Survivor,” it’s a wrap. There’s the unimpeachable streamroller that is seeing the “Single Ladies” dance, and there’s a bit of a cappella “I Will Always Love You,” and then there’s “Halo,” and I mean, if you haven’t already, come on, give up, give in. On “I Miss You” she virtual-dances with a figure bearing more than a passing resemblance to a Prometheus Engineer, and even that seems like a great idea.

Even despite, or maybe thanks to, the wait on new material, this actually is a pretty interesting time in the age of Beyoncé. Her last album was the moodiest thing she’s ever recorded. And she has severed ties with her dad, who shepherded her entire career; she is doing it free of the machine. If ever there will be a move away from the narrative of domination — a rejection of superstardom, a true crack — it would come now.

Of course, this being Beyoncé, she’s already gone ahead and neatly packaged all that ennui for us. Life Is But a Dream, her self-directed HBO documentary, was Beyoncé presenting herself as one who now looks inward. As New York’s Nitsuh Abebe wrote, “Given 90 minutes of HBO airtime to sell us any story she wants, she paints a rosy, responsible, carefully composed picture of someone who is, at most, making baby steps toward being less of a perfectionist. The parts of Life Is But a Dream that show us a ‘real’ and ‘vulnerable’ ­Beyoncé feel like the parts of job interviews where someone’s asked about their greatest weaknesses.”

So, yes: Even when she’s supposedly being vulnerable, we’re still here, dealing with, as our own Emily Yoshida excellently put it, “our love of/frustration with the perfect android of professionalism” that is Beyoncé. But, live, that’s an extremely powerful tool. There’s the chatter about the new album, and her newfound independence, and the concern over whether she can still move giant amounts of units. And then, in the middle of it, there’s Beyoncé, doing what she does. There is Beyoncé owning.

Filed Under: Beyonce, We Went there