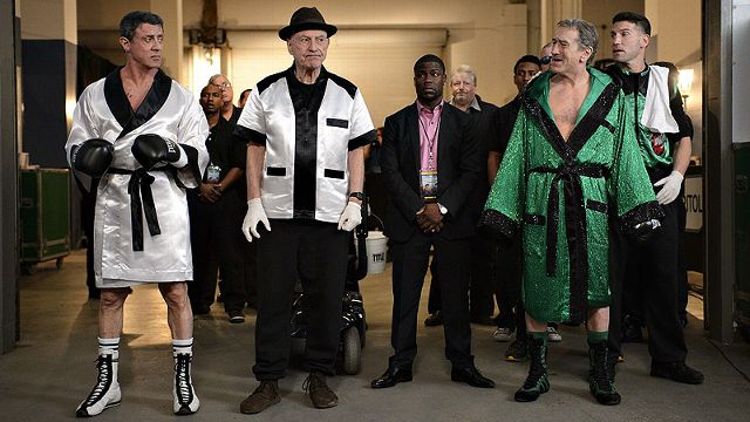 You see the posters for Grudge Match and know exactly how the pitch meeting went: “It’s Rocky versus Raging Bull!” But that gets you no further than a Super Bowl ad. And maybe Grudge Match should’ve lasted 60 seconds, but it’s a nearly two-hour movie that shakes loose of that pitch and puts some effort into the comedy.

As a film, it’s far from necessary. I mean, the demand to see a Balboa–La Motta fight is a campy urban myth of Alien vs. Predator proportions. But by the time Sylvester Stallone and Robert De Niro start training for the big match — it’s called Grudgment Day — you give in because, surprisingly, both actors have reported for duty, especially De Niro. He plays Billy “The Kid” McDonnen. Billy used to box. Now he owns a Pittsburgh car dealership and a neighborhood restaurant. De Niro’s ready to roll from his first couple of scenes. He crashes into a video-game motion-capture session eager to banter with his old nemesis, Henry “Razor” Sharp, the stoic and broke steelworker slab that Stallone plays. Billy doesn’t know he looks ridiculous in green tights and Velcroed Ping-Pong balls. He just wants to mix it up with Razor. Billy still thinks Razor did him wrong in their last fight (it’s been 30 years!), and they wind up destroying the gaming studio in a melee that makes them Internet sensations. Their spike in popularity leads to a highly touted, sold-out rematch, promoted by a loudmouth played by Kevin Hart.

When De Niro’s feeling good in a scene, he does the face people make when they want to “do De Niro”: the precipitous, open-mouthed frown. It’s the facial equivalent of a landslide. Claims that he’s been mailing it in over the years are overstated. Of course, he hasn’t exactly helped with his choices. He has made a shtick out of playing grizzled curmudgeons. But lately he’s been full of life. Here and in Last Vegas and The Family, he’s been vigorous and intimidating again. Who can say why? But his energy helps take the movie beyond embarrassment to semi-legitimate entertainment.

This part is similar to the grouch he played in Last Vegas, except that character was actually from Brooklyn instead of just sounding like he is. There he was dueling Michael Douglas for Mary Steenburgen. Grudge Match dusts off a love triangle featuring Billy, Razor, and a stunningly well-preserved blonde named Sally, who’s played by Kim Basinger. The particulars aren’t worth going into. Suffice it to say that her mid-thirties son, B.J. (Jon Bernthal), is Billy’s, but her heart belongs to Razor. There’s something charming about how estranged everybody is. B.J. doesn’t know Billy, but their schnozzes connect them. Razor hasn’t seen Sally in decades yet hasn’t stopped thinking about her, nor she him.

Is it nonsense that these people all live in the same smallish city but it has taken something called “Grudgment Day” to connect them? Is it strange that a woman of Basinger’s fine-boned beauty would produce a sweet-natured bruiser like Bernthal? Of course it is! But the film doesn’t make you think too hard about it. The screenplay is credited to Tim Kelleher and Rodney Rothman and directed by Peter Segal, who has done some dreadful comedies (The Longest Yard, Get Smart) but shows some good human touch here. The movie is more interested in what all this reconnection means emotionally. It’s almost touching to see B.J. enjoy training Billy. (Alan Arkin plays the uncouth codger who trains Razor.) You also get why Sally might have slept with Billy (who’s still a jerk) when really she loved Razor (he’s a lug). You also understand why De Niro is so eager to go after Stallone. To start: Rocky stole Taxi Driver’s Best Picture Oscar. But the need to fight roils both their characters as powerfully as romantic love does other people. And the fight itself is something to see.

I imagine that one advantage of a boxing movie starring two men well past their athletic peaks is that you gain a kind of authenticity in letting them appear to throw their own punches. They look very much as if they hurt. The match is remarkable because it’s better than you hoped and less pathetic, sad, or creepy than you expected. These two guys mean it. The film critic Lisa Schwarzbaum wrote an amusing and astute essay for The New York Times Magazine about the exasperating, absurd proliferation of movies in which old, oldish, middle-aged, and middle-agedish men do one last thing — Space Cowboys, Wild Hogs, The Hangover, Last Vegas, and, to some extent, Stallone’s The Expendables.

Schwarzbaum’s point applies here, too. And yet the movie succeeds despite the problematic fantasy it propagates. There’s simply the pleasure of seeing De Niro do more exclamation-point acting and being reminded that, when he’s not defending American movie masculinity with gassy action films and conducting experiments on his body and face, Stallone is still a star. The closer he gets to a boxing ring, the more alive he becomes. His stroll into the arena is one of the most effortlessly confident, incidentally sexy things you might watch an actor do. Seeing him in the gloves and robe, we know what Sally fell for all those years ago. We know because we fell, too. That slab was once a king.

Freak Show & Tell: Happy Holidays From Monsters Inside Me!