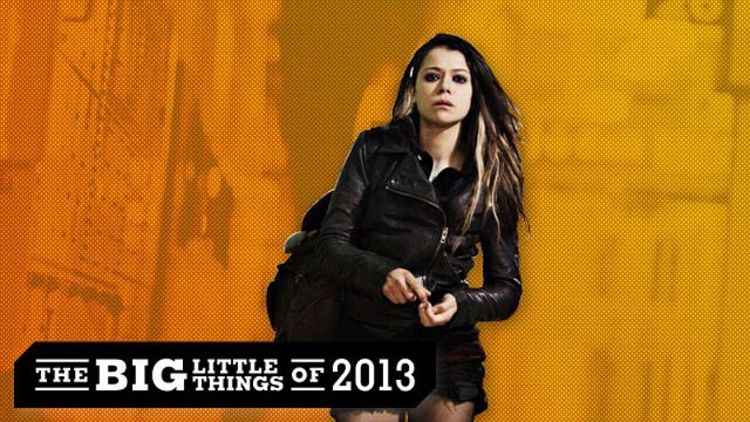 CanCon laws — the legal guidelines that mandate the production and broadcast of a specific amount of Canadian content by Canadian TV networks — have not produced a lot of hits outside the country that birthed them. Maybe you’ve heard of The Kids in the Hall; it’s less likely you’re familiar with Da Vinci’s Inquest or Slings & Arrows or Little Mosque. (If you’re a parent, you probably know about Caillou, and on behalf of my fellow citizens: I’m sorry.) But 2013 saw the launch of a Canadian series the whole nation could be proud of — and the provenance of which most Americans probably weren’t even aware.

Orphan Black is the story of Sarah Manning, a former foster kid who doesn’t quite have her life worked out: She has a troubled relationship with her ex, a violent drug dealer, and she’s lost custody of her daughter. Things get even more complicated after she happens to be standing on the platform when another young woman steps in front of a train — and Sarah sees that this other woman bears a striking resemblance to herself.

Sarah decides the best way to escape her own problems is to trade places with her double, Beth. And at first, it seems like a smart trade: Beth has a well-appointed town house, considerable savings, and a hot boyfriend. But Beth also has problems of her own, starting with being the subject of an investigation into a questionable shooting (Beth is also a police detective), and (not) ending with the fact that Beth knew she was one of several clones being systematically targeted for assassination. Over the course of the show’s first season (the second is coming in April — not soon enough!), viewers meet or hear tell of 10 clones in this line; and though they all look identical (except for their haircuts, conveniently), their interests rarely align.

Anchoring the series is the performance — or, rather are the performances — of Tatiana Maslany, who plays the clones. At this point, to see one actor play multiple roles in a single production is nothing new; Eddie Murphy and all the Klumps can tell us that. But Maslany is so good that you forget almost immediately you’re watching the same performer portray both the crazed Ukrainian hit woman and her unprepared prey. (Maslany has won Critic’s Choice and Television Critics Association awards for Orphan Black, but Claire Danes got an Emmy this fall that any sensible person would say properly belongs to Maslany — who was, somehow, not even nominated.)

Supporting Maslany’s work is the Greater Toronto Area, credibly representing what series creator Graeme Manson has described as “Generica,” a deliberately unspecified large city Canadians will be able to identify from context clues — the suburb of Scarborough, a plane ticket to Pearson International Airport — but that won’t mean much to an international audience. It’s a daring new way for a producer to work within CanCon strictures: Set your show in Canada (technically), employ a Canadian crew, run it on a Canadian channel (the SyFy equivalent Space airs it there), and make room for recurring guest stars like Maria Doyle Kennedy (who plays Sarah’s former foster mother, now raising Sarah’s daughter) by casting one Canadian to play close to a dozen roles.

We all owe a debt to Canada for making it a priority to support creative people by giving them money to make art in Canada, and to Manson for figuring out how to achieve his vision in the least overtly Canadian way possible. And congratulations not just to Maslany for her extraordinary success in Orphan Black this year (which also led to her landing a recurring role on Parks & Recreation, as Tom’s new love interest), but also to the Roughriders of her native Saskatchewan on their recent Grey Cup win.

The Year of the Crush: How the Radically Unfair Candy Crush Saga Took Over Our Lives