Freak Show & Tell: Happy Holidays From Monsters Inside Me! 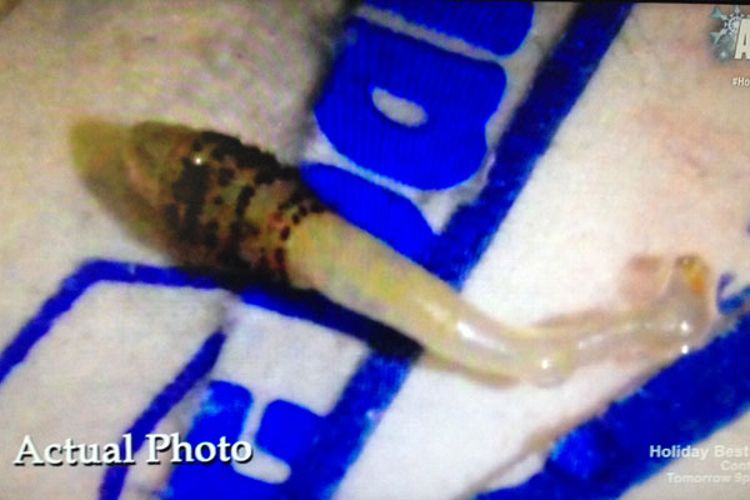 Who Is This Now? Tara (no relation).

Why Are We Watching Her? She’s sharing the tale of the time a botfly larva ruined her Christmas.

How Did She Get Here? She’s not entirely sure, but her best guess is that the problems started when she was traveling in Belize and was bitten in the scalp by a mosquito. Botflies reproduce parasitically via mosquitoes, which carry the teeny larvae on their abdomens that then fall off onto whatever organisms the mosquitoes bite, and burrow their way into those organisms, sometimes through the mosquito bite holes. So what happened was, when she got these mosquito bites, two botfly larvae burrowed into the holes and started living in her head.

What’s the Grossest Thing We See? Since the couple have quit their jobs to travel, they don’t have health insurance, and decide to try a home remedy they’ve read about online: Tara’s husband Andy smears the bites with Vaseline. The larvae are then forced out of their home in Tara’s head so they won’t suffocate, whereupon Andy has to pull them out, verrrrrrrry carefully, with tweezers; they’re covered with barbs, and if he breaks the larvae, any bits left in Tara’s scalp will definitely get infected. The part where we see Andy working the larvae out of her head is reenacted (but still horrible); the actual photo of what was living in her head and causing agonizing pain for several days is not. And it’s awful. That little bugger really got fat off her blood and flesh.

What Have We Learned? Don’t go to Belize.

Who Is This Now? Tristin.

Why Are We Watching Him? We’re hearing the story of the time he almost died by ingesting a foreign object.

How Did He Get Here? If the intro about him and his family including a detail about his father barbecuing a lot seems too random to not be relevant, you must have watched TV before! Turns out that what presents as severe nausea is actually the result of Tristin’s having swallowed a tiny metal bristle from a grill brush, probably stuck to a chicken breast or something.

What’s the Grossest Thing We See? The sight of the poor reenactor puking up some kind of dark red goop is bad enough, but we know that’s not real. What gives it its impact is hearing Tristin’s mother describing his vomit as smelling especially terrible: “It was just like tar” and “It smelled like rotten eggs and garbage.” Why did it smell so bad? Tristin’s surgeon explains: The brush bristle caused a bowel obstruction by, basically, stapling folds of his intestines to each other. Because he couldn’t pass food through his GI tract in the normal fashion, what he was vomiting was “bile, blood, and even his own fecal matter.”

Why Are We Watching Him? He’s telling us about the time he almost died.

How Did He Get Here? He developed a fungal infection called blastomycosis that spread from his lungs to his bloodstream, eventually even disabling his knee.

What’s the Grossest Thing We See? An early symptom of Rob’s infection was a persistent, pneumonia-type cough, and to illustrate it, we get a shot of the reenactor coughing up what Rob’s partner Angela described as “green, yellow, red, rusty-colored, and there was blood in it.”

What Have We Learned? If Rob is anything to go by: Finding yourself, by chance, on the brink of death may cause you to “enjoy what little time you have” and “don’t take nothing for granted,” but still not convince you to wear a helmet while riding your motorcycle.

Filed Under: Monsters Inside Me, TLC

More Monsters Inside Me

See all Monsters Inside Me