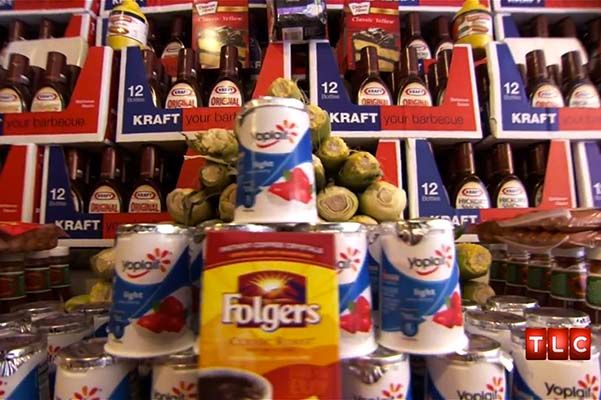 Who Is This Now? Rudy.

Why Are We Watching Her? She is a serious coupon enthusiast.

How Did She Get Here? By her own admission, she’s “a little OCD,” which may contribute to her need to add to her stockpile (which, she estimates, is worth around $3,500, and for which she thinks she paid roughly $200).

What’s the Grossest Thing We See? Rudy photographs her grocery hauls. Then she prints out those photos and scrapbooks them — I mean she seriously scrapbooks them, with stickers that say “Cool!” and everything. The second-grossest thing we see is that, when she buys $700 worth of groceries for a nickel or whatever, she does not bring them home in reusable bags.

What Have We Learned? Some people haven’t had a chance to hear about the Great Pacific Garbage Patch because they’ve been too busy cutting coupons so that they can buy 348 bottles of barbecue sauce.

Who Is This Now? Braxton.

Why Are We Watching Him? He’s preparing his family for survival after the apocalypse.

How Did He Get Here? He believes that America’s enemies will perpetrate a biological attack on the country — specifically, to cause a smallpox epidemic.

What’s the Grossest Thing We See? The grossest thing we SEE is Braxton preparing the family for a drill by giving the boys instructions as to where to wear their guns, and then turning to his daughters to give them orders regarding food storage. Not that I think prepping is a worthwhile activity or that teenagers should have firearms, but if you’re going to give them to your sons for self-defense, you should give them to your daughters, too, Braxton, you sexist pig! Later, we hear that Braxton keeps chickens as a food source, and that he has sometimes fed said chickens chicken. Disgusting.

What Have We Learned? Braxton has a very high estimation of the strategic value of his hometown (Salt Lake City).

Who Is This Now? Krista.

Why Are We Watching Her? She’s participating in her daughter Courtney’s in-patient couples therapy.

How Did She Get Here? When Courtney was in her mid-teens, Krista gave her permission to marry Doug, a man older than Courtney’s own father.

What’s the Grossest Thing We See? Asked why she thought it was appropriate for Courtney to get married AT ALL before she’d graduated high school, let alone to someone so much older, Krista explains, “I knew that she was going to need somebody that could handle her, and I recognized it. I recognized that this is the man that’s perfect for her.” Sensing something, Dr. Jenn Berman notes that Krista is newly separated from her husband and asks whether Doug is the kind of man Krista would want to date herself. Krista replies, “He’s got a lot of qualities! I’m not going to lie to you … Any woman would love the qualities that that man has. He is a fabulous man. Fabulous.”

What Have We Learned? As if Courtney didn’t have enough problems, now she’s in a love triangle with her mom?! Gross.

Who Is This Now? Susannah.

Why Are We Watching Her? She’s trying to work up the courage to tell her parents that she’s pregnant.

How Did She Get Here? Her on-again/off-again husband, Shane, is an ex-con and generally a dirtbag, so because Susannah’s parents supplement the government assistance she receives with financial gifts, she hasn’t been honest with them about the fact that Shane is back in her life and has fathered what will be her fifth child.

What’s the Grossest Thing We See? Susannah is an adult woman about to start law school who wears plastic children’s barrettes in her hair; Shane has not one but several tattoos on his face (including what appears to be a Pac-Man ghost right under his eye).

What Have We Learned? The LSAT may determine a person’s book smarts, but passing it is evidently no proof of good judgment.

Who Is This Now? Brittney.

Why Are We Watching Her? She’s having trouble breathing and thinks she may have the flu.

How Did She Get Here? Doctors believe that at some point she ate a salad made with produce that was improperly washed after being illegally fertilized with human feces, and that said “fertilizer” may have contained eggs of a roundworm called ascaris, which incubated in her intestines, where they could have lived for years without Brittney’s ever knowing. Except …

What’s the Grossest Thing We See? … well, then, finding her intestine inhospitable because of the fever that went along with Brittney’s flu, the worms started crawling up her esophagus to her airway, whereupon she coughed live worms into the toilet.

What Have We Learned? Eating in restaurants will probably kill us all eventually.

Tara Ariano doesn’t want to survive the apocalypse if Braxton’s going to be there.

Double Down on Bill Hader!