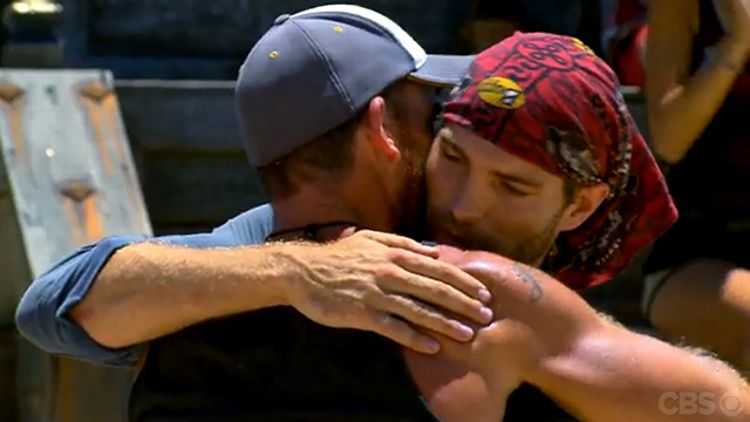 Things are just so bleak for the GRTFL. There’s no Bachelor or Bachelorette in sight; MTV’s Wednesday 10 p.m. slot, the most coveted of “10 spots,” is currently occupied by Girl Code; and Bravo will air four hours of 2 Fast 2 Furious tonight. What has happened to reality TV this fall? Did Bunim/Murray shut it down for 2013? Are there no more bad girls who want to join the fight club? Are there not seven strangers who want to find themselves while taking kamikaze shots in a loft on national TV? Please don’t tell me I have to start watching all of the Kardashian bullshit. I can’t. I just can’t.

Survivor, the New Yorker to the Real Housewives’ New York Post, continues to morph just enough to stay fresh, while still delivering all the story beats viewers came for in the first place. The backstabbing, coconut-thieving, starving folks are still milling about in their underwear on the beach, but this season they seem even more cognizant of the fact that they’re on television. They seem very aware that they’re creating a digital legacy that will be reviewed by millions of couch-bound judges.

And really, who wants to date someone who didn’t even make the merge?

The people who go on this show tend to overthink it. Much like Burning Man, it slowly becomes part of their personalities and identities. The Cochrans and Boston Robs and Ozzys and Hantzes have all turned their stints on Survivor into the driving force in their lives. Like professional athletes, they assess their self-worth based on how far they came before ultimately losing a million dollars. This is increasingly evident near the midpoint of Survivor’s 753rd season thanks to the returning players and their loved ones. In fact, this week’s GRTFL Top Five is the Top Five Quotes From This Episode That Prove These People Access Their Self-Worth Through Their Survivor Performances, listed from “Not really, Jacoby” to “I hope they keep her on suicide watch at Ponderosa”:

Laura, you married Gandolfini’s character from Where the Wild Things Are; he’s always going to be proud of you.

4. Tyson: “I will apologize for him constantly. I’m like, ‘Oh, sorry about Aras, he kind of doesn’t know, he is socially unaware,’ make sure people know that between him and I, he’s the one in charge.”

At this point in the evolution of the franchise, the contestants know that being assertive, showing leadership, and, shit, just being noticed is akin to a death wish. Instead of “outwit, outsmart, outlast,” the motto should be “out-don’t-get-noticed.”

2. GERVASE HAS A TATTOO OF HIS FORMER FUCKING TRIBE’S NAME:

1. Kat, after getting voted out: “At tribal today I got eliminated. I’m worried about Hayden (her boyfriend), that he’s going to be disappointed in me. And god forbid this does anything to our relationship, because on a scale of one out of 10 on coolness, I just got a negative two.”

She continued: “Our relationship is just starting and now I’ve, like, embarrassed all his friends. Who wants to date someone that doesn’t make the merge?”

WHO WANTS TO DATE SOMEONE THAT DOESN’T MAKE THE MERGE? Deal. Breaker.

Tyson is proving his guile. First, he offered the above quote about letting Aras take all of the leadership heat following the tribe shuffle.

Second, while getting settled at his new tribe, Tyson showed his sheisty ways: “It’s definitely a goal to steal and eat as much food (15 points) as I can for this tribe. You do have to do enough work or appear to be working just so you are not looked at as the lazy guy.”

Third, he gave us specifics on his second coconut heist of the season: “I don’t think I’m anointed as the lazy guy yet, because after I crack open a coconut and drink half of it, I pass it around to the others.”

But just when I was almost sold on the whole “Tyson is actually brilliant, even though he looks like he spends most of his time smoking weed in the back of a bike shop” thing, he dropped this gem on ‘em: “I really do like Aras. He’s a great guy. He’s funny. He’s a little out there with his Zen-type beliefs because I just have zero beliefs … except for magic. I believe in magic. It’s awesome.”

Ciera cried (5 points) when she saw that her mother, Laura, had been voted off and would have to face a Redemption Island Challenge against John and Brad “Not Daunte” Culpepper. Laura had a chance, because she has proven to be good at puzzles. Then they revealed that the challenge was puzzle-based. Then they revealed the puzzle. THE PUZZLE WAS COUNTING TO 100. Counting. That was the brain tease. Going from one through 99, IN ORDER. It looked like Laura was in trouble, because surely she would lose to the stronger, faster John and Brad. She didn’t, though. Counting proved to be too tricky for “Not Daunte,” and he was sent packing. But not before this:

Brad gave John a man-on-man cheek kiss as he said good-bye. Now, in my old age, I’ve grown partial to the man-on-man cheek kiss. I don’t suggest that you use it on strangers, but it is a great move for friends. And as a matter of fact, here’s a second GRTFL Top Five: the Top Five Best Scenarios for the Man-on-Man Cheek Kiss. Why? No reason:

5. The Disrespectful Cheek Kiss: The best example of this isn’t actually a man-on-man example, but rather Diana Taurasi’s smooch of Seimone Augustus. It’s so well executed that I had to showcase it. A cheek kiss like this is basically a way of saying to your adversary: You aren’t worth punching; in fact, you’re more cute than intimidating … so cute that I’m going to kiss you.

4. The ‘I’m Announcing My Arrival Via Head Kiss’ Kiss: This is less of a cheek kiss and more of a head kiss. When you spot your buddy at a bar watching the game on the monitor, you come up behind him and put him in a noogie head lock, then plant a big kiss on the back of his head. The upside is that at first your buddy will think he’s being attacked, then realize he isn’t. The downside is that you quickly become over-familiar with your friend’s head hygiene.

3. The Enthusiastic Kiss: My personal favorite. This is one of those I-am-so-happy-with-you-right-now-that-a-mere-hug-doesn’t-come-close-to-expressing-my-feelings-so-I–am-kissing-you kisses. This one’s great for grooms at weddings and dudes who hit game-winning shots.

2. The Joke Euro-Double Kiss: This one needs a willing partner who is on the same level. When done right, it can be really funny. When done wrong, really creepy. Tread carefully.

1. The Kiss You Give After Losing to Someone Who Hates You on Redemption Island: It’s basically a combination of all the above.

So with that kiss on the cheek, we bid adieu to Brad “Not Daunte” Culpepper. To properly mark this occasion, I wanted to track Brad’s origin story. It gets weird:

We know Brad played in the NFL. You probably assumed he was a cornerback or something. Nope. The dude used to be HUGE:

And he used to have those “I paid five dollars to get this done in Cancun” braids:

Then he retired from pro football and moved to Florida:

Then he lost a ton of weight and became a lawyer:

There is zero chance he is actually on the phone in that picture. BUT LOOK HOW SHINY HIS DESK IS! I will miss you, Brad. But now there’s a little silver lining if I ever happen to suffer a personal injury in Florida: Brad will protect me. He will be my “shield,” not my “anchor.”

Oh shit, I forgot to mention: The Challenge cast leaked. Since reality TV sucks now, I’m going to focus next week’s column on meticulously breaking down this potential cast. Until then, enjoy the weekend.

The Octavia Spencer Murder, She Wrote Reboot Is Going to Be Flawless