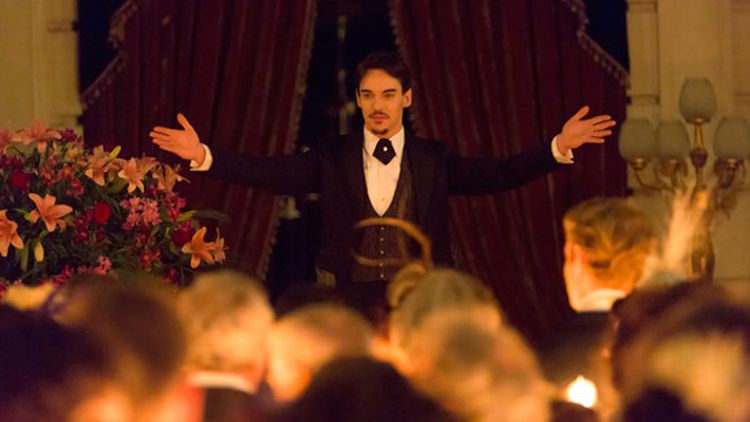 Wondering whether NBC’s Dracula is worth your time tonight? Andy Greenwald sums it up in two words:

Other than that, Ms. Harker, how was the show?

Here’s the rest of his preview, if you require a little more detail to make your viewing decision:

You want more? OK, let’s see. The one billionth retelling of the world’s hoariest vampire tale begins with our fanged friend being roused from a century of slumber by what appear to be grave robbers. As one of them soon learns, it’s often a better idea to leave old, dusty things alone — a lesson I wish had also been heeded by Dracula‘s producers. The show is a transatlantic collaboration between NBC and Carnival Films, the London-based class warriors responsible for Downton Abbey. But rather than do the sensible thing and just bring the dread count back to life smack dab in the middle of the dying embers of the Edwardian era, it explodes into nonsensical excess.

Our new Dracula — played by human smirk Jonathan Rhys Meyers — has a naturally plummy English accent but has arrived in London posing as an American for no evident good reason other than that some executive in Burbank probably red-flagged the idea of an entirely British cast. Drac is posing as a bourbon-swilling industrialist named Alexander Grayson, but our vampire king is really thirsty for… well, blood, yes, but also renewable energy. And the defeat of some sort of secret, Illuminati cabal that we’re led to believe are actually worse than a demon race of unkillable blood drinkers mainly because they have fancy airs and rapacious business interests. Grayson plans to defeat these villains in two ways: one, by putting them out of business thanks to his steampunk innovations, and two, by fighting them, slow-mo kung fu style, on CGI rooftops.

All this nuttiness doesn’t take into account Dracula‘s most dangerous weapon: boredom. Bosoms heave, teeth are gritted, fangs are bared — but every moment of pulpy excess is drowned in interminable scenes of speechifying and ballroom dancing. (Seriously: The scene in which Drac basically invents electricity feels longer than the thousand lifetimes our quasi-hero’s been chasing after Mina Murray.)

Dracula represents all the worst impulses of the broadcast networks in 2013: It’s shamelessly chasing old trends (Twilight!) and fading success (Downton Abbey got 12 Emmy nominations this year!); it messily mashes up bad ideas with worse ones like a toddler left to eat his dinner alone. And it does it all with an off-putting patina of violence and self-importance, as if the main lesson to be drawn from the last decade of television is that smiling is for suckers. If that were the case, everyone involved with this show would have grins so bright they could incinerate the undead.