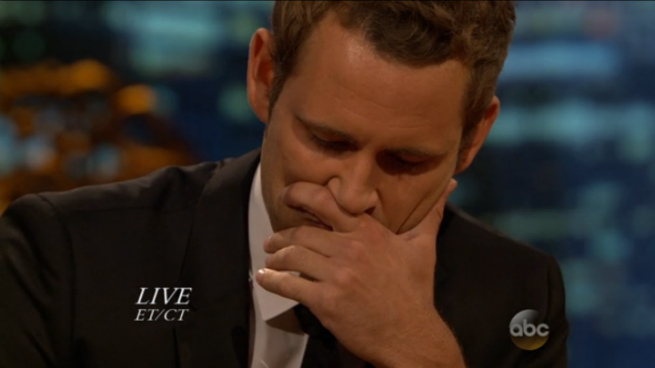 Everything is better when coitus is involved. Movies, songs, vacations, social circles, nights out: Everything becomes a little more dangerous and exciting when the ol’ pokey poke is in play. We can’t help it — we are all hardwired to feel this way, straight-up coded for coitus. This innate interest in the in-and-out is why this Bachelorette season’s “After the Final Rose” special was so special. Yes, it happened …

We finally have coitus confirmation.

This franchise has always hinted at fantasy-suite shenanigans with winks and nods, but never has the fornication been brought to the forefront. On Monday night, runner-up Normcore Nick — rebuffed, broken — threw a desperation, slut-shaming sucker punch that landed below the belt. It is a moment I am sure Normcore Nick will regret; it is also a moment this entire GRTFL column will be dedicated to.

We FINALLY have coitus confirmation.

Normcore Nick had been a front-runner the whole season. He was the recipient of the first impression rose, and ever since, his relationship with Andi only continued to grow stronger and closer. I thought he was going to be the one who would ultimately end up on the engagement launching pad and intertwined with Andi on the cover of Us Weekly for months to come. Normcore Nick thought so as well.

Normcore Nick before getting his heart broken: “It’s been incredibly hard for me to imagine that she has anything close to what she has with me with anyone else, and tonight went a long way to reassuring me that she is on the exact same page as I am. And I can totally see myself proposing to Andi.”

Guess what, Normcore Nick, SHE IS NOT ON THE EXACT SAME PAGE AS YOU. In fact, the page she was on was the “How do I get rid of this dude so I can fuck Josh and have his babies?” page. When she finally dissed Nick, it wasn’t cute either. She not only went with the ol’ “I don’t want to be with you,” she also went with the “Your soul is problematic and that is why I can’t be with you.”

This is what Andi said while breaking up with Normcore Nick: “I started feeling like, knowing the intensity between us, and that worry, that there has been so much intensity and so much overanalyzing. And then, honestly, like that last date, I wanted to just have fun, and I wanted to relax, and as hard as I tried I couldn’t do that with you. We both sit here and we just overanalyze everything and I think a life with you would be me overanalyzing everything.”

This is what Normcore Nick heard: YOU ARE A MISERABLE PERSON. EVERY SECOND I SPEND WITH YOU IS UNBEARABLE AND TORTUROUS. I HATE YOU AND I WISH I NEVER MET YOU BECAUSE EVEN IMAGINING A LIFE WITH YOU HURTS MY BRAIN AND MAKES ME WANT TO DRINK BLEACH UNTIL IT ALL GOES AWAY.

Now, if someone said those things to a normal human, a normal human would leave her alone, get slammered, and then take a few months to piece themselves back together. However, as my colleague and all-around brilliant human Emily Yoshida pointed out, perhaps Normcore Nick isn’t as normal as we all thought. Normcore Nick asked Chris Harrison if he could chase Andi to Mexico, then, rebuffed, he showed up at the “Men Tell All” special uninvited and attempted to talk to Andi there. That didn’t work either. When Nick finally had his chance to speak with Andi at the “After the Final Rose” live event, he had a prepared speech. A prepared speech that involved telling everyone watching on live network television that she had had sex with him and then broke up with him. Here is how it went down:

The Gawd Chris Harrison: “Nick, what are you thinking?”

Awkward, yet prepared, Normcore Nick: [Long pause.] It is hard to hear that, you know? I think [another long pause], the hardest part is hearing you say that is thinking back on those moments, you know, I guess you know like [another long pause] knowing how in love with you I was [the longest pause], if you weren’t in love with me, I am just not sure why, like, why you made love with me.”

Never before has there been confirmed coitus on any iteration of this franchise. But not only did Normcore Nick air her out, he did it with the intention of hurting her. He did it with the intention of causing a problem in her relationship. He was trying to disgrace her. He was trying to hurt her. I guess he was trying to get her back, but I have no idea what strategy he was employing. Why would he confirm coitus on national television? What did he think was going to happen? It was confusing, controversial, and convoluted. I guess sometimes, when all else fails, humans just hurt those they love to make themselves feel better.

It was difficult to watch, but the difficulty was hedged by my couch companion. I had the luxury of being joined, once again, by my 92-year-old grandmother-in-law. This week’s GRTFL Top Five is the Top Five (Printable) Comments Made by Grandma As She Watched Normcore Nick Get His Heart Broken, listed from, “That is kind of cute” to “Why don’t we just impeach Obama and make her the president right now?”:

5. “Both guys resemble each other, gee whiz.”

4. (When Josh is about to propose to Andi.) “Suit doesn’t fit him, he is poor. He must have borrowed this one, it is so tight.”

3. (When Andi is on the engagement launchpad.) “Looks like they are standing on a giant pizza.”

1. “Another man says he is in love with her. And he had sex with her. And I am saying that I hope she isn’t carrying a baby by this guy when she is with that guy [huge laugh].”

While the coitus confirmation was fun and everything, it didn’t come without a cost. We were watching a desperate man who had been hurt trying to hurt someone else to make himself feel a little bit better. Normcore Nick did not come off well. He may have been trying to set himself up as the next Bachelor, but he definitely set himself up as the fool. It was clear to see. Even Grandma turned on Normcore Nick: “Why don’t these guys shut up their mouth? As they say in Jamaica, he is disgracing her.”

Grandma was right, he should have shut up his mouth. He should have just transitioned to Bachelor in Paradise and kept his coitus to himself. He didn’t, though. Instead he left us with the scarring knowledge of how sweet the fantasy suite is. I can’t say we are all better for it, but I can say that I am very excited for Bachelor in Paradise. May the confirmed coitus continue.