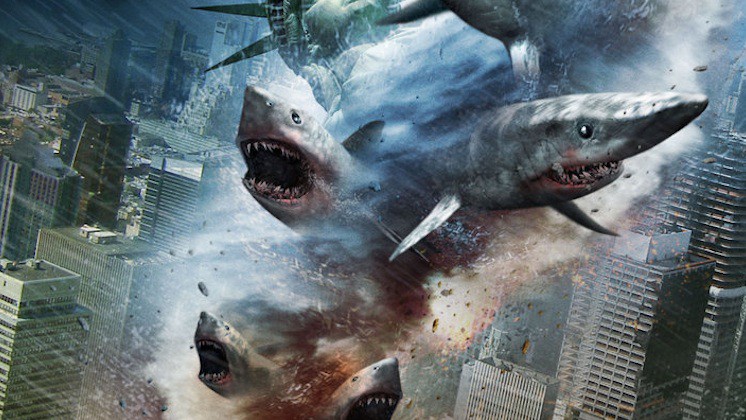 What do you do when confronted with a towering cone of hot air, garbage, and nonsense? The majority of us would likely stay far away. The brave, curious, and foolhardy might venture closer to get a better look. And then there are those who pull out their phones and begin tweeting, regardless of the danger to themselves or others.

Members of the latter two groups — 3.9 million of them — tuned into Syfy’s Sharknado 2: The Second One on Wednesday night. Per Vulture’s Joe Adalian, that’s a roughly 183 percent gain on what the first movie drew one year ago. This is being treated as a big win for Syfy, which aggressively touted its latest blast of stupid as stupid. And I suppose it was. The Second One marked a smart shift from past promotions, when Syfy tended to advertise slop like 2012’s Piranhaconda with fangs, not the tongues planted in cheeks just behind them. The result was the highest rating ever notched by one of the network’s original movies.

Not to be too much of a Martin Brody here, but it’s worth noting that 3.9 million viewers on a July Wednesday is (again, per Adalian) about half of what a CBS rerun of NCIS managed the day before — and with 100 percent less Ian Ziering to boot. But it’s not nothing, especially for a network that is still struggling to gain a foothold in the larger culture some 22 years into its existence. I haven’t had a chance to fully parse the numbers, but I imagine Syfy was able to attract an audience not usually known for its interest in earnest hours about Canadian aliens. And so Sharknado 3 is already green-lit for next summer. A PowerPoint of dumb hashtags for 2015 is probably being compiled at this very moment.

I didn’t actually have the pleasure of watching Tara Reid’s hand or Ziering’s chain saw the other night. (Our own Holly Anderson did, and she’s a lot more enthusiastic than I am.) But I don’t think that disqualifies me from writing this piece. Sharknado 2 exists in a particularly cynical corner of the cultural universe in which the product is of no actual value. What matters is the reaction. (Despite its ludicrous premise, Sharknado actually has more in common with OMG-baiting reality shows. Both toss limbs around for sport.) It’s a shrewd way of doing business. By admitting up front that Sharknado is trash, Syfy divests itself of any responsibility for real cleverness or creativity. (Cameos by Andy Dick, Downtown Julie Brown, and Jared the Subway guy aren’t kitsch. You’re not actually supposed to piss in a readymade.) And by serving up a corpse — a lot of them, actually — expressly to be dissected, the network offloads the bulk of its marketing work to a willing unpaid labor force of 140 characters or less.

On Wednesday night, everything went according to plan. Sharknado 2 unspooled and Twitter, as expected, unhinged. The movie generated “one billion Twitter impressions,” according to a Syfy press release, which is a nothingburger of a number, but one that clearly holds great value to the network. Congratulations are no doubt in order for Comcast and NBCUniversal here. They got exactly the sort of triumph they were hoping for. The real question is this: Why are we all celebrating it?

It’s no secret that event television is now the only reliable way to get people parked on their couches en masse — it’s why the value of live sports and award shows has never been higher, why SNL will never die, and why Allison Williams is being fitted for a flying harness as I type this. And I’m all for brainless summertime diversions. But this strikes me as particularly soulless: a major corporation outsourcing its creative department onto the Internet, and the Internet proudly, eagerly rising to the challenge.

Or maybe it went in the opposite direction. The Twitterstorm left in Sharknado’s wake wasn’t particularly funny or even fun. It was exhausting — the Chris Farley interview of real-time parody. (“Remember that crazy thing that happened? It just happened!”) There was something depressing about the way Syfy threw chum into Twitter’s roiling ocean and watched it be fought over and devoured like fine caviar. Look, I have no doubt some people truly enjoyed their experience Wednesday, and as a site we’ve certainly tried to have fun with it. Far be it from me to try to harpoon anyone’s joy. But sharks have a biological imperative to swarm every time there’s blood in the water. The whole point of being a human is that we don’t always have to take the bait.