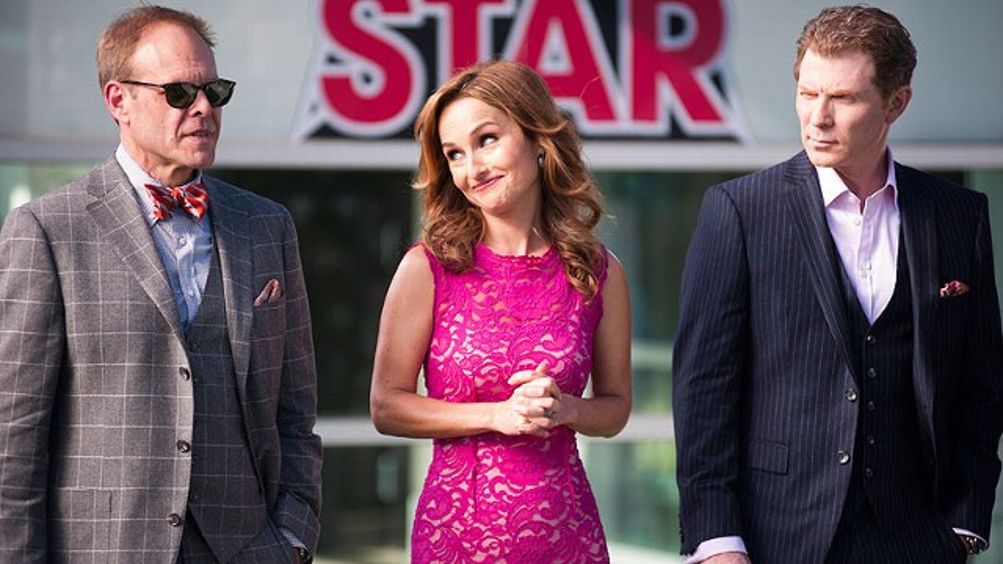 Until two years ago, Food Network’s signature competition series was known as The Next Food Network Star, a name so stunningly inaccurate it’s a wonder the FCC allowed it. There have been eight winners of this gloriously clunky hatewatch, eight hubristic chancers who, like doughy gnocchi, have somehow floated to the top of an overheated crock. But only one of the eight could conceivably be called a “star”: Guy Fieri, the human hot wing, whose catchphrase-based charisma brought Food Network a prepackaged slickness and a processed “edge” it’s been chasing to the detriment of its viewers ever since. In 2011, the program was renamed Food Network Star, which at least presents its target as a goal instead of an inevitability. I would have added a question mark — The Next Food Network Star? — or just erred on the side of truth, though I suppose The Next Host of a Short-Lived Show Airing Sundays at 8:30 a.m. on the Cooking Channel doesn’t have the same zing.

Having a brand-buttressing reality show became de rigueur for networks over the past decade, as a general lusting for the ratings of American Idol emulsified beautifully with basic cable’s inherent cheapness.1 But few are as cringey and none as revealing as Food Network Star, which is currently midway through its ninth underseasoned cycle. When feeling charitable — or at least peckish — one could argue that FNS does for the culinary world what American Idol or The Voice does for music, that it tears down the traditional barriers to success that prohibit gifted amateurs from becoming celebrated professionals. But the comparison is inexact, since melisma is a lot easier to communicate through a television screen than, say, minestrone. When we hear singing, we have a way to judge it. Taste is far more elusive and so, on Food Network Star, cooking ability is merely an added bonus, like a shortstop who hits for power or a dog that can surf.

Instead, Food Network chooses to test more tangential skills, like dressing up as cowboys, feeding Louie Anderson, and articulating the Orwellian concept of “food point of view.” Imagine if American Idol contestants, rather than caterwauling through Disco Week, were forced to spend an episode cozying up to Doozer & the Ratfink on Columbus drive-time radio or talking brand strategy with Jimmy Iovine’s tax attorney. Imagine a show built not around Avril Lavigne’s voice but around the conference calls and market testing devoted to her pre-release transition from a vaguely patchoulied high schooler into a sneering sk8r girl. On American Idol all that stuff happens later, once the cameras are off and the publicists have been hired. It’s still essentially a singing competition.2 Food Network Star treats celebrity like a recipe and then walks us through each excruciating step.

And it’s rarely pretty. The most gifted cooks head to Top Chef. Those with more manageable egos seek validation on Chopped. Food Network Star, by contrast, is filled out by an eager goon squad of pandering fameballs, few of whom seem to have noticed that the ability to dice and the ability to schmooze have as much to do with each other as speaking Esperanto and the Olympic triple jump. The contestants range from the mildly deluded to the clinically insane, and they tend to fall into four distinct categories. There are the Health Crusaders,3 doomed by their limited palates and scoldy POV. (No one wants to watch a half-hour on the glories of kale after binge-watching Cupcake Wars; it’d be like programming The 700 Club after Zane’s Sex Chronicles.) There are the Ethnics, talented and fascinating individuals forced to turn their personal cultural histories into dumbed-down grist for the human interest mill.4 There are the Guy’s Guys Who Act Like Guy, braying meatballs who specialize in spicing shit up and dumbing shit down.5 And then, most heartbreaking of all, there are the poor, misguided Competents.

While I love to laugh at the gormless ciphers willing to flip and flop-sweat their way through dozens of identities in search of something that might “connect” with the judges,6 it’s these Competents — the blinkered line cooks and semi-successful caterers — whom I actually feel sorry for. It must be galling to be able to fillet a bass in under a minute yet still come undone at the thought of sharing a soundstage with the Ace of Cakes. Usually these Competents flame out early — see here, here, and here — but every so often one of them sneaks through and wins the thing, like the steadfast Aaron McCargo Jr. or last season’s pompadoured victor, Justin Warner. I actually have no idea what the latter, who owns a shticky if credible restaurant in Bed-Stuy, was doing on FNS and neither, it seems, did Food Network. The self-proclaimed “Rebel With a Culinary Cause”7 won Season 8 easily, yet was last seen making salad in a commercial for Home Depot. As for McCargo, he’s long since faded from the screen, surpassed in airtime by Kelsey Nixon, a Tracy Flick–ish twentysomething he’d sent packing in Week 7 of Season 4. That Nixon, an earnest lightweight, still has a show (Kelsey’s Essentials) and McCargo doesn’t is no surprise: She’s young and blonde and chipper. In TV terms, that’s not being born on third base, that’s being born in the owner’s luxury suite. Nixon would have a show on the Model Train Network if she owned a pair of overalls and such a thing existed. Of all of these “winners,” I retain a soft spot for Amy Finley, a shell-shocked Francophile who won Season 3 on a technicality,8 filmed six awkward episodes in a Brooklyn brownstone, then walked away from the circus entirely.

As befitting a show devoted to celebrating the artifice of television, Food Network Star has improved immeasurably as entertainment over the years. After eight tepid seasons overseen by executives Bob Tuschman and Susie Fogelson, these stardom experts finally had the good sense to fire themselves and give their seats at the vagina table of judgment over to the considerably more polished triumvirate of Bobby Flay, Alton Brown, and Giada de Laurentiis. Now, the production values are higher, the editing carrot-stick crisp and more suspenseful. The current cycle features a particularly oblivious group of wannabes, from Rodney Henry, an unintelligible piemaker who has yet to produce an edible pie, to Danushka Lysek, an icy former model who bravely refused to pander to audience expectations of basic humanity. There was a lady named Lovely who put flowers on things. There’s a real-life woman named Nikki Dinki. The ratings remain robust.

Yet there’s something so inherently rotten about Food Network Star that I sometimes can’t believe it’s still on the air. In its ninth season the show has become a revelation, a gleaming machine constructed to document the precise moment when the cornball of corporate artifice hits the hot fat of vanity. Though totally convinced they have something to say, these overmatched contestants are often rendered speechless when tested on their camera skills or rated by consumers armed with twist-dials of instant approval. As the weeks go by, they begin to take on the pained facial expression of a diner expecting dessert and given cabbage instead. By the end, they’ll slice and serve up any bit of themselves in a desperate desire to please.

Sensing this vulnerability, the judges hover like vultures, searching relentlessly for the soft meat of personal struggle or relatability. Andres Guillama arrived wanting to teach men how to cook — clearly a pressing issue — but was thrown out not because of his creaky concept but because he refused to exploit his personal story of radical weight loss for the cameras. When goony Chris Hodgson admitted a history of addiction, Flay began salivating like he’d been served a rack of honey-mustard glazed ribs. Yes, the contestants are willing dupes, but there’s something predatory and bone-jarringly cynical about the way the jiggly marrow of experience is harvested from their grinning skeletons with ratings-goosing precision. It’s remarkable and it’s terrifying. The processed Food Network Star can make Velveeta out of anyone. 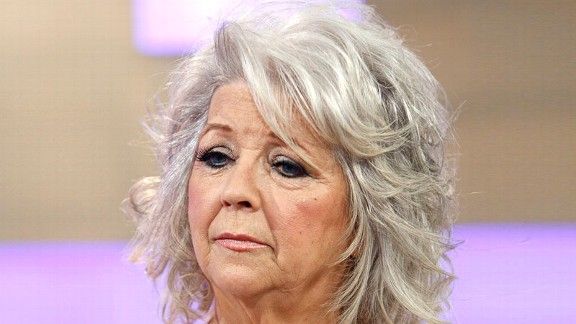 Speaking of fake cheese, Kraft foods recently released a study proving something that Food Network has known for years: Consumers don’t actually want to cook. Rather, they want to feel as if they’re cooking. This is great news for a channel that has always been more aspirational than educational. On Food Network Star, the judges rant and rave about “authenticity” and “expertise,” but ultimately want neither. They want big smiles, they want hackneyed stories, and, above all, they want obedience, both to the created persona and the overall brand.

For a time, the network had it all in Paula Deen, a self-styled doyenne of Southern cooking whose buttered drawl — and even more buttered recipes — gobbled up huge swaths of airtime. As the smoke clears from the racist implosion of Deen’s career (and its typically gaudy, self-serving aftermath), it’s worth noting that her Calvin Candie daydreams barely crack the top five of reprehensible things she’s responsible for. There’s the sclerotic abomination known as “The Lady’s Brunch Burger,” of course. And Food Network apparently had no problem with Deen’s endorsement contract with Smithfield Ham, an aggro-business known for its egregious animal abuse, or the shady manner in which she admitted to suffering from diabetes — brought on by the lardcore diet she publicly espoused — the same day a lucrative deal with a diabetes drug was announced. The lawsuit that brought Deen’s past racism to light is itself deeply disturbing, alleging years of employment abuse. None of this jibes with Deen’s cartoonish antebellum charm, but that barely mattered; hypocrisy has a distinct aroma but very little taste.9 Paula Deen has been in business with Food Network for 14 years. It took the uneditable reality of the n-word for the channel to finally send its cash cow to the slaughterhouse.

Paula Deen, like all Food Network Stars, is above all else a saleswoman. And the product she peddles is an invented version of herself. (After all, we can’t ever taste what she’s cooking. So what are we really buying?) That particular Paula Deen, the cackling insulin mama who slapped mozzarella sticks, French fries, and chicken fingers between two slabs of bread and called it a sandwich, is certainly deserving of our mockery. But the other Paula Deen, the one lost somewhere underneath the pancake makeup (not to mention the pancake syrup), is fascinating. The American South is home to some of the most diverse and delicious food traditions in the country — none of which involve deep-frying lasagna — and Deen’s real-life tale of a single mother who pulled herself and her family out of poverty is as compelling as her prejudice is alarming. But nuance and contradiction have no place on Food Network.10 In its well-scrubbed kitchens, expertise can be read off cue cards and authenticity is earned by jumping through hoops. In the end, the only thing more unpalatable than Paula Deen’s sausage balls is learning firsthand just how that sausage gets made.