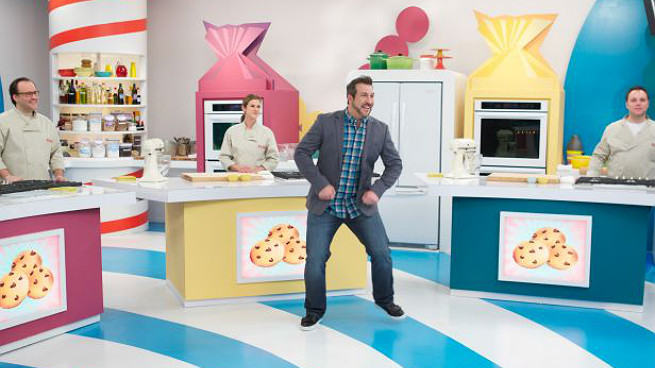 Yesterday we learned of 35 new series coming to Food Network and the Cooking Channel, including The Valerie Bertinelli Project, a daytime show debuting in September that features Bertinelli and her husband making dinner for “family and celebrity friends in their Los Angeles home.” (And every time, I hope, the celebrity friend is her Hot in Cleveland costar Betty White, and every dinner is hot dogs and French fries, because that is what Betty White eats every single day.) Now you may use the restroom, because I am about to tell you about each of the 34 other shows in explicit detail over the course of 5,000 words.

Just kidding, I’ll stick to the highlights. On the Food Network side, entrepreneur/former Apprentice/Giuliana’s husband Bill Rancic will host Kitchen Casino, in which competing chefs play poker, slots, and roulette in order to — it sounds like; I was reading in between a lot of casino puns here — determine the ingredients they’ll be given to create their dishes. A $30,000 prize awaits the winner, which is three times as much as he or she would get for a Chopped victory. O.G. Chopped has always seemed in need of a wealthy old culinarian investor, dropping by to surprise people with new cars, but at least we can look forward to The Ultimate Chopped Champions Tournament in August, pulling its cast from prior winners across all spectra (celebrities, pros, “local heroes,” and regular civilians) and offering a $50,000 prize.

Rewrapped bears mentioning because it’s hosted by Joey Fatone and judged by Marc Summers. BOOM! When you read that sentence, I actually pulled your childhood out of your body, put it in a bottle, and now I’m going to exchange it on the Google dark net for drugs. Rewrapped charges its chefs to re-create “as closely as possible, some of America’s favorite guilty pleasures, and then invent an entirely new dish using the original treat as an ingredient” to score a year’s worth of the featured food and “bragging rights.” There’s no money? It’s like an internship with Oreos? And then there’s the clear winner in the title category, Game of Cones, a mystery basket challenge for “ice cream connoisseurs.” Expect a feast of ice and fire and canned umami things mellowing out in some cream.

There’s a theme here. Most of the new Food Network syllabus is geared toward competitive cooking, with some attempts at feel-good restaurant makeovers and giveaways thrown in for good measure (of course, some of those are still competitive — see Rachael Ray’s The Big Tip, in which every server featured will receive “a life-changing tip — but only one will get The Big Tip”). A few of the stodgier how-to programs have stuck around during the daytime hours to keep Bertinelli company, three of them starring Bobby Flay.

Cooking Channel has become the destination for slow-cooked, noncompetitive TV, allowing fellow Scripps Networks Interactive property Food Network to devote itself entirely to cutthroat bread pudding matches. There’s an assortment of international cuisine — African, South African, Korean, British, and American pub grub — as well as personality-driven shows, like The Real Girl’s Kitchen, with Haylie Duff, which promises an “intimate look” at Duff’s life in Los Angeles and New York, “where she is constantly inspired.” Poor Rev Run, on the other hand, gets a mildly depressing press release for Rev Run’s Sunday Suppers: “[W]ith four of their six children off on their own, Rev and his wife, Justine, have a near empty nest and long for the days of a full table. Determined to get the gang back together for weekly Sunday dinners, they will use simple, heartfelt recipes to lure the kids back to the table.” You never call! You never write! We made the grilled cheese like you like it!

Canadian web personality and Bitchin’ Kitchen star Nadia G will host the traveling show Bite This With Nadia G to retrieve the “down and dirty culinary secrets of the local chefs and their favorite foods.” The trailer — sorry, “sick intro” — sets kind of an interesting tone, featuring a censor-barred penis, a man dropping his pants in front of a border patrol guard, and a stiletto heel sinking deep into manure. I know nothing about Lorraine’s Fast, Fresh and Easy host Lorraine Pascale, but it sure sounds as though she’s out to make you feel crappy about yourself because “she creates amazing and delicious food, completely from scratch, in super quick time.” Good for you, Pascale. Bobby Deen will be keeping the Deen empire alive following his mother Paula’s dismissal, taking the Bobby Deen Project into “the homes of America” to replace all of your sticks of butter with cans of Pam spray. And then he leaves, and you reach right for the McNuggetinis with best friends (full disclosure: also my friends) Alie Ward and Georgia Hardstark’s Surprise Party With Alie & Georgia.

Auto-Tuned Julia Child will escort you out now.

Never watch HBO with your parents. Just don't. They're gonna be weird about the sex stuff.

Look, don't judge Drake for lint-rolling his pants courtside at a basketball game. Shit gets linty sometimes, it's not like lint knows you're busy watching the playoffs.