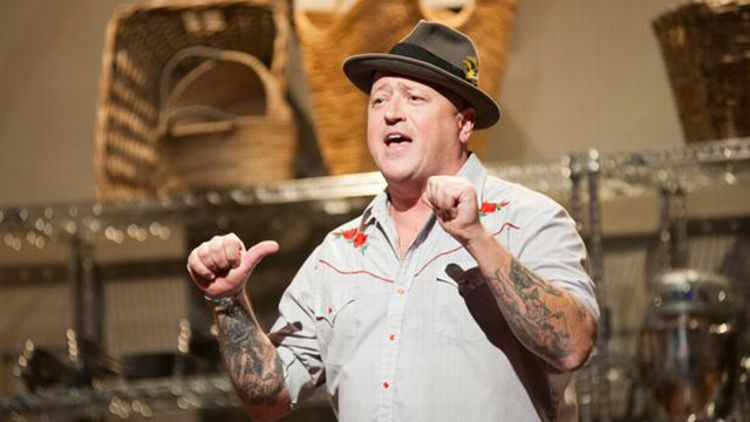 This season of Food Network Star, its ninth, was awfully weird (and before we review, please put on your spoiler goggles, if necessary). There was Danushka, a model and private chef whose vocal fry, sarcasm, and general don’t-give-a-shit demeanor made her seem like she’d been deliberately cast as a troll; Viet, a chef and restaurant owner who once beat Bobby Flay on Iron Chef yet was the fifth eliminated contestant (his arc was sad, maybe because his angle was “the American Dream” but he routinely sabotaged himself when he fell victim to his own nerves); and Lovely, the caterer who reigned over Star Salvation only to get axed as soon as she rejoined the competition. As the show progressed, it seemed clear that there were two front-runners, both with silly names: Nikki Dinki, a food blogger/YouTube chef who was all about eating “meat on the side,” and Stacey Poon-Kinney, a survivor of Restaurant Impossible whose culinary POV, as they say on the F ’Net, was “vintage with a modern twist.” Nikki’s pitch was flawless by Food Network Star standards — unpreachy yet virtuous, healthy yet not diet, accessible to omnivores and vegetarians alike — and Stacey regularly served some of the best dishes this season, while never losing her composure. Nikki was sent home because she didn’t know what pilaf was. Stacey, finally taking the note that she couldn’t loosen up and seem genuine onscreen, was excused after she told the personal (and depressing) story of her restaurant’s debt before Robert Irvine stepped in. It was not fair — that is, if the premise of Food Network Star is that the winner should be a person who can cook well and talk OK at the same time. But in another, more important way, it was fair. Because neither of them were pie style.

What is pie style? Pie style is contagious. Pie style is connecting with people. Pie style is my style, Jack, and my style is excellence. This is the platform of Rodney Henry, a top-three finalist, pie shop owner, and musician with iffy culinary skills under pressure but that very special je ne sais quoi that’s powerful enough to cause some very strong reactions. Rodney is different from what remains of his competition: There’s flirty Damaris, who giggles her way through green bean casseroles and “modern Southern” dishes the way a handy replacement for Paula Deen should; and Russell, the underdog, who totes around a briefcase full of “culinary sins” like fat, bourbon, and offal while accidentally indulging in long pauses and taped-presentation flubs. They had to scramble to arrive at their pitches, reaching around in the dark for marketable POV’s and grabbing at romance (Damaris) or the novelty of adding bacon to ice cream (Russell, you’re so late to this party). Rodney may not know how long things have to cook in the oven or be able to justify why a person might want to create a short rib, taleggio, and caper pie, but he’s not selling his food, or even himself. Rodney is a performance artist hawking post-YOLO, flip-flop-flappin’, big-bad-voodoo-daddy feelings. On a show that routinely harps on its hopefuls to deliver a genuine self, food with a side of sentimentality, and showmanship before an invisible and silent studio audience, Rodney has stubbornly remained an avatar. He has never deviated from his habit of calling everyone “brother” or “Jack” and referring to food as “dynamite” and “out of sight.” Everyone seems to hate him: They don’t like his hat, or his head, or his refusal to limit the definition of pie style to “making things into pies.”

We have become accustomed to Food Network hosts as all-encompassing brands that combine epicurean authority with a palatably non-controversial human delivery system. Food Network Star has always been an interesting show for the way it offers a peek behind the curtain, a view to the meticulous editing people have to undergo to become public personalities. It’s as close as you come to watching the process of reality stars cooking up white lies (every dish must be inspired by his or her mother, warm childhood kitchens, his or her heritage and/or struggle with obesity) and getting coached on how to appear warm, how not to jiggle their bodies, and how to moderate the speed and tone of their one-minute monologues. When the veneer cracks, as it inevitably sometimes does in every celebrity niche, there is a sense of betrayal, as though we assumed we were in the virtual presence of a good and trusted friend. Pie style is a sideshow that offers something else to look at, a celebrity that is an idea rather than a human being.

There has been an undeniably sad vibe funking up the Food Network studio this season, not just because of the Paula Deen fiasco but because every single FNS contestant has been visibly rocked by the criticism doled out by the judges. Maybe we’re at a cultural crossroads with regard to being torn down in our two most modern realms, the Internet and reality television. Revealing yourself in its entirety has proven dangerous, yet often unavoidable — when you capitalize on and monetize your own personality, you run the risk of getting chewed out to your very core by strangers and critics. Perhaps the defense against this is to carve out an alter ego, a Frankenstar whose platform isn’t personal, it’s pie style.

So, again: What is pie style? Pie style is no errors. Pie style is a friendlier, less terrifying Guy Fieri. Pie style might be riding a motorcycle, it might be pho dac biet with a crust, or it may appear as a tattoo you gave yourself one night on a dare and don’t regret (regret ain’t pie style, Jack). Pie style is an honest sell of a fake thing, and if that isn’t healthful, vintage-modern, American-dream sinfulness, then I have some cement shoes for you.