Chopped: All-Stars: Checking In With Our Old Celebrity Cook-off Pals Joey and Johnny 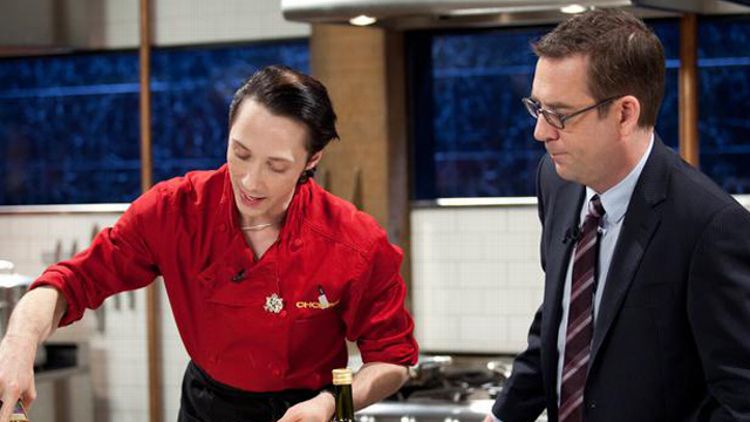 It used to be that if I wanted to spend two or three hours obliterating my free time, I watched Law & Order. Now I watch Food Network’s Chopped. I’m not sure what changed. I think it’s more difficult for me to stop myself from watching another Chopped when I’m on a binge. With Law & Order, a new episode means a new case and new disposable characters, and as each hour begins there are a few panicky moments where I am wondering who everyone is and how they know each other, and these moments give me an out to change the channel. There’s nothing like that on Chopped. In fact, the rhythm of the show means that I am always slightly angry that the episode is ending with — and that the winner is being decided by — a dessert cook-off. Desserts are for nerds, and it is the Achilles heel of the Chopped format. For that reason, at the end of an episode I always want to cleanse my palate by starting a new episode and watching them cook appetizers, a comfortingly savory and relatable course. And the next thing I know, I’m watching a whole new episode.

Also, it’s possible I’ve gotten so dumb that I can’t even handle Dick Wolf & Co.’s L-shaped plot twists anymore, and in order to relax, my brain needs the rigid formatting of Chopped‘s fixed-verse style. The show’s format leaves so little room for variation that watching multiple episodes in a row is sort of like reading the same Mad Lib over and over again, with only the blank spaces erased and changed. The ingredients and the chefs are new each time, but you start to know exactly when host Ted Allen will make a lame joke and when a sweet grocery-store item will confuse chefs. “But then I looked in the basket and saw the ARTIFICIALLY SWEETENED KID’S BREAKFAST FOOD, and I had no idea how to use that with the STANDARD PROTEIN,” said the chef with A SINGLE PERSONALITY TRAIT. Also, whoever filled out “Scott Conant shaved his beard’s neckline LIKE THAT” used a pen so it always has to look like that.

Chopped: All-Stars lets the show get (slightly) weird. Professional television chefs and judges compete, and there’s a great novelty in watching famous food-world personalities compete for their peers. I personally find it very satisfying when people with a lot of money struggle in front of cameras. The way this season works is that the winner of each individual All-Stars episode comes back in the final episode to compete against the other winners for $50k for their charity. Last night was the “Celebrity” edition, where known pop-culture figures with only the vaguest connections to food fight for the chance to get obliterated in the finals by a professional chef. Ted Allen introduces the competitors by saying, “You will surely be starstruck by this celebrity fight.” You won’t be. Poor Ted. Coming into this show he had more cooking credentials than Padma Lakshmi did when she started hosting Top Chef, yet after hosting 11,000 episodes, no one ever stops to ask him what he thinks of the food. I’m not even sure he gets a plate to try. He can only adjust his tie bar and sigh.

The episode begins with a video package introducing the celebrity contestants, and at the end of their introduction the celebrities each deliver “catchphrase lines.” They are a little dense, so I will help decode them. (I majored in Semiotics, therefore I am qualified to do this.) “You’ve got a ringside seat to watch me cook,” says Laila Ali, Muhammad Ali’s daughter and a former pro boxer herself. I believe she’s referencing how the seats next to a boxing match are called “ringside.” Joey Fatone, formerly of ‘N Sync, says, “To competitors, I’ve got three words for you: bye, bye, bye.” He means to eliminate the three other challengers, and when they leave he’ll say “Bye” to them because he’s polite. Also, ‘N Sync, a band he was in, recorded a hit song titled “Bye Bye Bye.”

“I’ve got the edge to spin this competition my way,” says Johnny Weir, Olympic figure skater and former national champion. This one has a lot going on. “Edge” refers to how skates have edges. It may also be a nod to The Cutting Edge, a famous movie about ice skaters. He says “spin” because as a figure skater he does lots of spins. “My way” is likely an allusion to how Paul Anka wrote “My Way” for Frank Sinatra in New York City, also Johnny Weir’s home. “My Way” is about a man at the end of his life taking responsibility for how he faced life’s challenges while still holding on to his integrity. Though Weir is young, his life in figure skating is nearing its end, and he can look back on his bold and unique choices confident that he did it “his way.” Finally, comedian Judy Gold says, “I’m going to be a Chopped champion.” I don’t get this one. She’s a comedian. I expected more. Also, the only clip of her performing stand-up in the video package appears to be taken from a camcorder at the back of a comedy club. She has been around a long time and done many great things; it’s strange that’s the only video they pulled. Maybe she is very protective of her material.

Joey Fatone and Johnny Weir were on Seasons 1 and 2 of Rachael Versus Guy: Celebrity Cook-off, respectively, and their losses there have not dampened their hopes of raising money for charity, getting on TV, and kick-starting their own culinary careers. Also, Joey Fatone and Laila Ali faced off in a season of Dancing With the Stars, with Fatone just beating out Ali, and she’s back to get revenge, in an entirely different venue. What a small, crazy world. “Hi, Laila, how’ve you been? Still not boxing? Yeah, I’m not singing, either. Anyway, cool to run into you at another one of ‘these things,’ in this insane genre created to fulfill the public’s insatiable desire to watch ‘celebrities’ do whatever. It’s like if Harry Crane’s half-baked idea on Mad Men to have a one-hour prime-time special filled with Joe Namath doing a Broadway revue was on 16 hours a week instead of once a year.”

The actual competition on last night’s show was not particularly compelling. The contestants struggled, as is the way of things on this show, but instead of at least a couple of them turning out surprising combinations and making a plate of food you might want to eat, none of them did that. All of this food looked bad. It’s impressive that the normally brutal judges were able to so completely swallow their criticisms and find nice things to say about all the chicken tenders overcooked and then sprinkled with crushed-up vanilla cupcakes. “I like how all the food fit on the plate and the plate didn’t have any holes in it and when I put my fork on the plate it didn’t give me an electric shock or emit a loud noise or anything.” In the appetizer round, the basket has vanilla cupcakes, chicken tenders, avocados, and kochujang, a fermented Korean condiment. Johnny Weir literally puts every ingredient in a bowl and mashes it all up with his fingers, which is the purest distillation of the Chopped ethos I’ve ever seen. He then lays strips of raw yellow pepper next to his dish and massages truffle oil onto it. He says, “There’s nothing better than fresh raw yellow bell pepper.” I disagree. Judy Gold’s chicken tenders with cupcake breading get her sent home.

The entrée basket has skirt steak, matzo crackers, sweet orange gelatin cups, and collard greens. Joey compares cooking to being a musician, because food is a symphony and also a dance in your mouth. Laila defends her overcooked steak, and she says that a lot of people she knows, who are black, like their steaks well done. Marcus Samuelsson smiles uncomfortably. Weir cooks like he eats; as a skater he is always on a diet, so his food tends to go easy on fat and seasoning, two things professional chefs and eaters like. They also don’t like how small his portions are, and he gets sent home for making a tiny steak and sprinkling the matzo over the whole dish last-minute. Geoffrey Zakarian says, “You brought a sense of style we’ve never before seen in the Chopped kitchen,” because of how Weir’s sneakers have silver studs on them.

Joey and Laila face off in the dessert round, and I resent the whole thing. The ingredients are circus peanuts, passion fruit purée, graham cracker cereal, and curry powder. Joey throws a bunch of crap into a custard, Laila throws a bunch of crap into an ice cream maker, and then they mix the rest of the ingredients up with butter and berries. It’s artless and boring and I think the third round of Chopped should be making a cheese plate, or a cocktail, or something else. Change this show. Laila wins, and she gets the honor of losing on next week’s finale. She got her revenge on Fatone, who is disheartened he didn’t get to raise money for the Fatone Foundation, the suspicious charity his own family runs. Ted Allen walks off set and turns off the lights of his dressing room, plugs his tie into the wall, and charges his battery. It’s time to film the next episode.

Do You Like Prince Movies? Podcast: Pain & Gain and Michael Bay