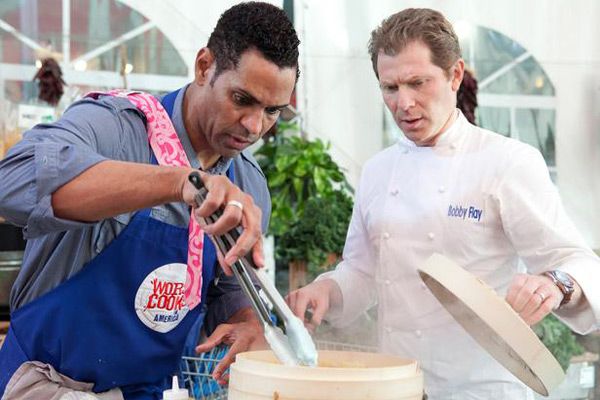 Sunday was the fifth episode of the season, and I no longer feel like I’m watching bad cooks become better at cooking. I am now watching bad cooks become better at being on television. However much Anne and Bobby are coaching the contestants on-screen pales in comparison to how much the producers are coaching them off-screen. Everybody’s sound bite game is getting tight. Maybe these final six contestants made it this far because they’re strong in all aspects of the competition, but I was overwhelmed last night by the way every sentence uttered in the confessional sounded like it came out of a writers’ room. These sentences aren’t coming out of a great writers’ room, but it’s probably a room with walls and a door that people with computers and college degrees sit inside.

The contestants discover this week’s clue in the kitchen of their house: It’s a tiny grocery basket filled with fruit and vegetables. The note reads, “Time to make a good ex-sample out of you.” Sue bravely ventures a guess. “I think we’re going to do some shopping.” You can’t slip anything past these guys. In order to grocery shop, they put on matching aprons and vests. As everyone knows, this is how you shop. Amateurs will often put the apron on over your shopping vest, but that’s a mistake. Rasheeda is dreading the trip to Stew Leonard’s, a New York grocery store. She says, “I hate grocery stores, because there’s so much food and I can’t cook any of it.” I understand what Rasheeda is saying; I hate Pep Boys because there are too many tires and I can’t eat any of them. Rasheeda would prefer a smaller grocery store, with only some food, if that food was already cooked. I think she wants a restaurant.

For this week’s Skill Drill, the contestants will face their biggest fear and cook for other people. They’re going to make traditional Chinese dumplings, as a team, for the supermarket customers. These poor customers. Carla’s quotes make less and less sense as the episode wears on. She says, “Only aisle I know in the shopping market is the fake-and-bake aisle!” That’s obviously not true, Carla, but also you are an adult woman and it’s just a lie. Rasheeda is worried about making all the patrons sick. “We already made our friends and family sick!” I would enjoy a cutaway to all their friends and family, sick in bed with thermometers coming out of their mouths, before a grimacing doctor looks at the camera, takes off his stethoscope, and grimly shakes his head, “No.”

Anne and Bobby instruct them how to make 20 wonton, 20 shumai, and 20 gyoza. Mercifully, the dough is premade. Carla says, “I never steamed nothing except when I was ironing my pants.” Every time they show Carla I think to myself, “When does she have time to iron her pants? She keeps it so crispy.” Bobby explains the folds of a wonton as a pleat. “Pleats are out, but with dumplings, they’re in.” Chet goes nuts for that joke. “They’ll be in next season.” Michael says, “I hope not,” and Chet is visibly upset at Michael. I’m not sure if he’s mad that Michael doesn’t believe him, or that Michael doesn’t like pleats. Also, why doesn’t Michael like pleats? He wears bow ties and khakis every day. He’s not the Marlboro Man. “I don’t wanna look like a dork!”

Shopping will be a scavenger hunt, because that replicates a normal problem home cooks have. Rasheeda says, “I haven’t been on a scavenger hunt since I lost my radio in the jail.” God, make a show out of that. If anybody deserves a spin-off, and no one does, it’s Rasheeda and her search for her lost radio. “Spread ’em, fellas!” Do you think she has special rubber gloves that fit over her nails? Never mind. Don’t think about that.

The contestants have a shopping list, but every ingredient is in the form of a riddle. They are simple riddles, but that doesn’t stop Chet from misunderstanding every single one. I didn’t write them down word for word, but they are like: “If you’re eating Asian, this is a joy, it’s a dark salty sauce, known just as —” and Chet yells, “Teriyaki!” He is so sure it’s teriyaki. It’d be a shame for a contestant to go home because he was bad at riddles, but also it would be very appropriate for this show. To my surprise, Carla turns out to be the only one on the Blue Team who can handle riddles. Alina gets a pass because she’s foreign, but Chet has no excuse. His head is so big; how can he not fit dumb rhymes in there? One of the riddles is basically, “Sticky and sweet, this comes from bees,” and Carla yells, “Honey!” a dozen times before Chet comes to the answer on his own.

The riddles solved, the cooks get to pleating dumps. This is the first team challenge, and it turns out Chet does not work well with others. He slaps away Alina’s hands, and she sort of threatens to call the Russian mafia on him. I think it’s a joke, but usually people smile when they joke. If the Russian mob whacked Chet in a Food Network–related disagreement, the New York Post would really enjoy writing that headline: “WHAT TOQUE SPOKE WAS NO JOKE; BAROQUE BLOKE CROAKS.” Carla thinks she’s really nailing the dumplings. “You say Carla, you say winner!” she chats to no one. She is unraveling in front of us. I think she maybe forgot some medication when she showed up at the Worst Cooks house, and we are seeing the side effects of her withdrawal. She realizes she forgot to cook two of her dumplings. She’s definitely two dumplings short of a full order.

The shoppers at the grocery store enjoy the dumplings, because they are free and they are shopping and they get to be on TV. If there are free samples when I’m grocery shopping, there is no stopping me. I strafe that table shamelessly. Grocery stores probably don’t sell fake mustaches for exactly this reason. I’ve gone back for thirds on cinnamon-sugar crab dip. Alina and Rasheeda are the MVPs, and the Blue Team wins overall. Anne is disappointed, but luckily, a Skill Drill loss means nothing.

The cooks then meet Anne and Bobby at Williamsburg’s East River Bar for the main challenge. They are going to be cooking for some motorcycle enthusiasts. East River Bar is a fun dive bar that I’ve made lots of mistakes in, but it’s not a biker bar, unless you count bikes with fixed gears. Also, the main biker guy who Anne and Bobby introduce, Andy Animal, is sort of a local legend, mostly for being at rock shows with his shirt mostly off. I didn’t know motorcycles are his deal. Actually, I’m not sure the guys they bring in for this party are real “biker dudes.” Just three blocks north of this bar is the home base of the Brooklyn chapter of the Legion of Doom, a motorcycle club with an imposing leader named Lucifer. I know this because I lived next door, and a friend who wrote a local newspaper article on Lucifer got subpoenaed by the Brooklyn district attorney to identify him in open court. My point is, biker dudes often don’t want to be on camera. Also, big ups to Lucifer. Because of him our block was one of the safest in Williamsburg.

Bobby and Anne teach the chefs how to cook wings. You fry them, and then you cover them in sauce. You might think this would be hard to screw up, but you’d be wrong. Sue says, “I don’t know where my wings are gonna be tossed. They could be tossed all across the room for all I know.” I do not know what Sue is talking about. But Sue reveals she owns two Harleys and is secretly a biker chick herself, and that is great. I would not have guessed it. Well, if you gave me 10 guesses I might have guessed it. I like Sue a ton more now, especially when she says she’s never seen a fig. Alina makes a “beer sauce” by pouring beer into a pan and it bubbles over. This show’s main gag is stuff “bubbling over.” Carla calls her lemon pepper chicken “Ride or Die Lemon Chicken.” You may remember that in the first episode, Carla made Ride or Die Enchiladas. Does DMX get money every time she mentions “Ride or Die”? He could use it.

The cooks also have to make a second appetizer, and each is tasked with something way out of their league. Bobby curses Carla with a lobster quesadilla. Carla, who is sounding more and more like some kind of weird drunk rhyming demon, says, “The only seafood I know about is see the food, eat the food.” How does this woman make it through regular human life? “The only antibiotics I know about are my Auntie and when she buys orthotics.” She is gonna get an infection. She murders her quesadillas, and her wings don’t have enough lemon pepper. I think Bobby is itching for her to go. Michael’s wings had about 1½ ounces of mango juice for about five pounds of chicken. There’s no flavor. Alina wins the main dish challenge again. She’s on a roll! Maybe Bobby and Anne are afraid of the mob. Michael and Carla are sent home, and I mourn the loss of such exciting competitors. OK, mostly I mourn the loss of Carla, because she’s fun to write about. But I don’t think that’s the last we’ll be hearing from her! (She’s likely to leave comments.)