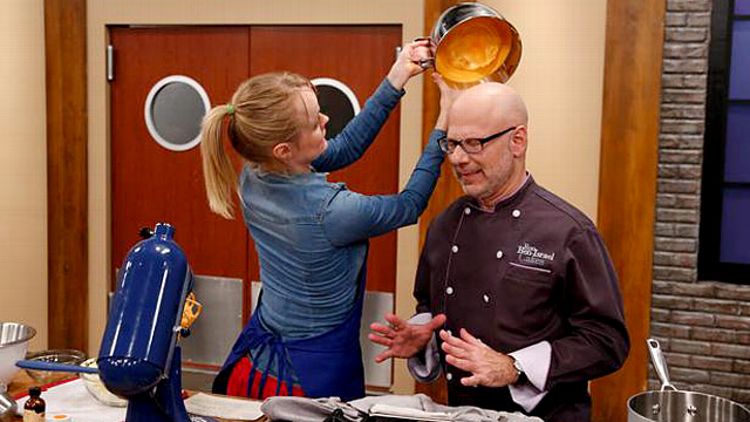 This show spends very little time in the Real Worst World house, and that’s likely for the best. I read an interview with Carrie Lee and she said much of the downtime was spent putting makeup and drag on Aadip and Alex. I bet Alex put on women’s clothing a lot in college, for the joke, and that he thought it was extremely, overwhelmingly funny every single time. “Hmm, which dress should I put on tonight to make my housemates laugh? Something elegant.” But this week’s episode begins with Anne and Bobby paying a surprise visit to the contestants’ kitchen. Bobby peeks in the fridge, only to find nothing but an overturned apple sauce. He’s disappointed with all the takeout menus he sees, which the producers planted. “They should be practicing at home!” Why in the world would they want to do that, Bobby? Reality competition shoots famously take a dozen hours; I imagine they get home exhausted. Also, they are so bad at cooking. Literally some of the worst. Who wants to come home and eat their own garbage after a long, hard day? “All I want is some of my famous burnt chili mole pasta.”

Anne assembles the troops and lectures them. “In the time it takes to call up and order the food and have it get here, you could cook something just as tasty.” Nope. That is not true. Especially not for these people. I’m all for more cooking, but don’t pretend that delivery in New York City isn’t the easiest thing. Unless you live on top of Whole Foods, grocery shopping in New York is a nightmare. I live in the middle of a busy neighborhood with big convenience stores, and if I want lettuce, a bag of rice, and some bacon — to make my famous rice-bacon lettuce wraps, I guess — I have to go to three different stores. Everything’s a hassle. Don’t pretend takeout isn’t easier. For this skill challenge, the chefs will be making Chinese food. Carla says, “I love Chinese food. That’s why I keep it right where it’s supposed to be: the restaurant.” That is definitely where I keep my Chinese food: at the restaurant. I keep it there. I also noticed for the first time that Carla’s chyron says she’s a drug and alcohol counselor. I bet she’s a great one. “Aw yeah, you love heroin. I bet you don’t love it as much as I love Bobby Flay, who I want to let rail me. I’m a fiend for Flay. You love dope! Get better.”

The contestants will have to prepare their dishes in the time it takes for the delivery guy to show up, in what I imagine is a very real challenge. Carrie Lee says, “Let’s hope this delivery guy is bringing this food directly from China.” Then the show uses that stereotypical, somewhat offensive Chinese melody as a musical cue. Cool choice! I wonder if they had to pay extra to license that song, but one exec was like, “It’s worth it. You can’t put a price tag on art. Especially Chinese art. Because an hour later you want to put a price tag on it again.” That exec is the worst.

Anne proceeds to show the chefs just how easy making takeout-quality meals at home is by cleaning the shrimp. “Who wants to spend six dollars and wait 18 minutes for shrimp fried rice when you can scoop out the shrimps’ jam-packed waste pipes yourselves with nothing but your fingernails and a little bit of patience?” Sue says, “The shrimp poop is smaller than my son’s poop,” but no one asked.

Anne tells the cooks to hold onto the discarded shells to make a shrimp stock. Right. Before the next surprise kitchen inspection the cooks will be like, “Help, our fridge and freezer is full from all the stock we make on our own. We can’t fit any more of the stock in it.” Then Anne preps the dozen types of vegetables that are going in this stir fry. She does not show how tedious it is to unbag and wash and dry that produce yourself. I am sorry if I sound like a broken record, but Chinese takeout is universally regarded as the best for a reason.

Carrie Lee tells Bobby she eats takeout “every day.” That is impressive because she has pretty good skin. She must juice a lot. As the cooks rush to beat the arrival of the takeout, Carla says, “I hope he lives far away.” Yes, because delivery guys generally leave from their houses. As Carla knows, how delivery works is you call the restaurant, where Carla keeps her Chinese food, then the restaurant calls the delivery guy at home, then he picks up your food, then he brings it to you, then he goes back home and sleeps until it’s time again. That guy sleeps like Edison.

I did not mention that the guy who answers the Chinese place phone is wearing a ninja mask, which I imagine does not make it easy to speak on the phone. There is a place in New York called Ninja, but isn’t it Japanese? This is all offending me. All the contestants hope the delivery guy is cute and slow, like Channing Tatum. We cut to lots of shots of him biking. It’s like Premium Rush! I hope you guys saw that film. You should if you haven’t. Every time Joseph Gordon-Levitt, a bike messenger, approaches an intersection, we see the multiple ways his route selections could play out. That means that every 13 minutes or so you get to see Gordon-Levitt destroyed by a car, and that is pretty satisfying. Also, the climax involves a “flash mob” so what are you waiting for?

Bobby asks Carla about her takeout preferences. She tells him she loves “THIGH.” Thigh? Die? “DIE!” He asks her to repeat it a few times. She spells it out: “T-H-A-I.” Oh, our bad, Carla, we did not realize you were doing an offensive Thai accent that also made zero sense. Bobby says, “And then that happened.” Don’t play disappointed about racist stuff minutes after your show played that song. You can’t have it both ways. Carrie burns her garlic and has to start over. “Now it’s a game of catch up, and I don’t mean the condiment.” I wish this was a game of ketchup. That sounds like an amazing game.

Rasheeda says she orders shrimp fried rice twice a week, which, oh boy, but her comfort with the dish leads to a confident win on the Red side. When Anne announces her name, the crew audibly gasps. They are all fighting over who gets to be her husband. Chet Chet-terizes Chinese food and takes home a win for the Blue Team. When I say “take home,” I mean these skill challenges mean nothing and have no lasting effects. Crystal didn’t get an egg in her fried rice, and Carla’s lo mein lacked sugar, so they end up on the bottom.

This week’s main-dish challenge is about baking, something these contestants are not ready to handle. They should really focus on stir fries. Measuring powders and ice-cold butter does not seem up their respective, unskilled alleys. The Blue Team will be making a cake for two “cool twins” named Dash and Sawyer. Those are great names. Lost came out in 2004 and it’s a lot for me to process that these parents maybe named their kid after that fictional con artist who liked the nickname “Freckles.” Maybe Dash is named after the artist who loved drugs. Either way, these kids are turning 7, and they love rocks, building, tennis, and cooking, so make them a cake involving those things. The Red Team is cooking for Rita, who is retiring after 42 years. They don’t list her interests, but I imagine “being alive” is right near the top. She says “chocolate and nuts are a big priority.” She’s all business. Rasheeda has never seen a person as old as Rita. “She’s been around a verrrry long time. She deserves a special cake.”

Rasheeda’s idea of a special cake is one topped with raw grated ginger. For extra flavor, she grates some of her fingernails in, too. Rita will really appreciate the little touches. The cooks get some help from Ron Ben-Israel, the host of Sweet Genius. I have never seen that show, but its deal seems to be that he makes big cakes and talks with an accent. “If everybody bake cake, we have da world peace.” I disagree. Sugar really makes me crash hard, so if everybody baked and ate cakes, the world would be full of cranky babies. Michael has some news for the audience. “I got news for you: I do taxes, I don’t really decorate cakes.” That is some interesting news. He writes a word out in raisins. Old people do tend to like raisins. His decoration is meant to evoke Rita’s love of travel, but instead it looks like a plane is about to fly into the Eiffel Tower. Les Français n’oublieront jamais.

The Blue Team struggles this week. Chet’s attempts to Chet-terize Dash and Sawyer’s birthday cake means he wants to make the cake “black.” He struggles to find a three-fourths teaspoon. Do kids like black cakes? One time, my Italian butcher offered me a piece of a black cake from his cutting board, and he wouldn’t tell me what it was, and so I ate it, and it was NOT chocolate, and then he told me it was made with pig’s blood. Also, he cut and served it to me with the knife he used for butchering meat. The way he cleaned that knife is by wiping it on his apron. I did not like that cake, and the twins don’t like Chet’s cake either. Carla does not understand measuring cups, but she keeps yelling that she can “fake and bake”! Sue’s cake is a mess. She says, “At this point, it’s a BLEEP BLEEP.” I actually think she said “fuck shell,” which is a funny thing to call a cake.

Alina is a madwoman, and she makes her cake green and decorates it with a sugary sunny side up egg. Kids famously love egg yolk. But the kids like it. She wins for the Blue Team. Over on the Red Team, Rasheeda makes it two for two in this week’s challenges and makes Rita’s day a very special one. I guess they got over the raw ginger. Her cake did have nuts, which as we know, was a “priority” for Rita. Carla overcooked her cake and broke it into a dozen pieces, but she slopped it back together with icing and tried to call it finished. Bobby doesn’t buy it. Carrie Lee’s cake was undercooked and tasted like “furniture cleaner,” but it was extremely pretty. Everybody on the Red Team faces elimination. There’s some strange editing, because the second that Anne announces Crystal is going home, Crystal’s face is already covered in tears. She will miss all her new best friends. Bobby sends Carrie Lee home, and you can tell it’s hard for both of them. It’s hard for me, too. I feel like these people are my best friends, in the way that I don’t mind when my best friends disappear and I look forward to five weeks from now when I don’t have to see my best friends anymore.