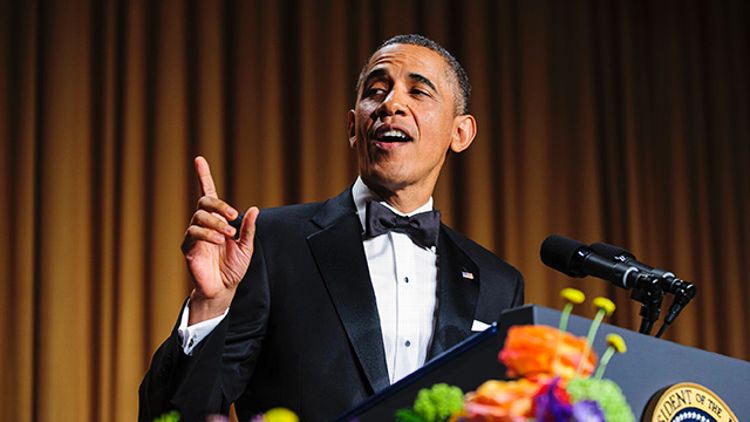 There is an event that takes place in Washington, D.C., every year, traditionally the last Saturday of April, officially titled the White House Correspondents’ Dinner and unfortunately hashtagged as #NerdProm.

An observation: This event is not a prom for nerds. It’s five celebrities and six Patron shots away from being the Golden Globes. Also, as a FOUR-TIME attender of prom, the WHCD’s complete absence of Axe Body Spray, 18-person dinners at Benihana, or English teachers trying to Breathalyze me while I try to grind to Chingy does not say prom to me. Not at all.

Historically, the event has operated similarly to a roast, in the sense that the main attraction (the President of the United States of America) makes fun of oneself and those in attendance, followed by a performer (typically a comedian) taking the podium to do the same.

Last year, the performer was Jimmy Kimmel. In 1991?

This year, it was Conan O’Brien.

Conan was very good. He made fun of CNN, print media dying, online journalism being horrible, CNN again, and then CNN again. Loved every second of it.

He wasn’t the main attraction, however. That was Barry.

The best thing about Barack Obama is that he’s not cool, but often tricks you into thinking he is. He’s simply a very charismatic dad that has a talent of learning “hip” things, referring to them as “hip,” and then delivering said “hip” things in a charming manner, especially when he chuckles at his own jokes.

But he is not cool. Trust me. And if you’re skeptical, ask Sasha and Malia. And Michelle.

In his address, about 23 minutes long, he threw in pop culture references in the way only a slightly cool but not really that cool dad can (see: walking out to “All I Do Is Win”). To his credit, the material usually landed. What’s worrisome, however, is that with his ever-increasing comfort pushing the culture envelope, he’s always a reference away from landing a true gem, or sounding like the lamest and/or most inappropriate guy ever.

To prove this point, let’s look at his speech reference by reference and take a moment to appreciate how each could have pivoted for good or for disaster, had he kept talking.

On Khaled and Rap

“Thank you. Thank you, everybody. How do you like my new entrance music?”

Good: “What a year that Khaled Khaled is having, am I right? Love you, Khaled Khaled.”
Bad: “Give it up to DJ Khaled, that’s my guy. Funny story, his catchphrase is “We the best.” Oh really? You the best? NOT AT LINKING VERBS, APPARENTLY.”

“Rush Limbaugh warned you about this — second term, baby.”

On Being Bad at Basketball

“And then there’s the Easter Egg Roll, which is supposed to be just a nice, fun event with the kids. I go out on the basketball court, took 22 shots — made two of them. That’s right: two hits, 20 misses.”

Good: “But I guess that’s what happens when you go from the Bulls of Chicago … to the Wizards of Washington.”
Bad: “It’s like, who am I, the President of the United States of America … or Jason Terry?

On Jay Ruining Everything

“So, yes, maybe I have lost a step. But some things are beyond my control. For example, this whole controversy about Jay-Z going to Cuba — it’s unbelievable. I’ve got 99 problems and now Jay-Z is one.

Good: “And yes, I will be walking out to that song next year, just FYI.”
Bad: “Also, do you know how hard it is to prevent a former drug dealer from getting to Cuba? Have you ever tried? IT’S REALLY HARD, ESTEEMED GUESTS. TRUST.”

“Of course, everybody has got plenty of advice. Maureen Dowd said I could solve all my problems if I were just more like Michael Douglas in The American President.”

Good: “Bloggers and their opinions, right?”
Bad: “SAY IT TO MY FACE, MAUREEN.”

“And I know Michael is here tonight. Michael, what’s your secret, man? Could it be that you were an actor in an Aaron Sorkin liberal fantasy? Might that have something to do with it? I don’t know. Check in with me. Maybe it’s something else.”

Good: No suggestions. This was perfect.
Bad: “SERIOUSLY, KEEP MY NAME OUT YOUR MOUTH, MAUREEN”

“I want to give a shout-out to our headliner, Conan O’Brien. I was just talking to Ed, and I understand that when the Correspondents’ Association was considering Conan for this gig, they were faced with that age-old dilemma: Do you offer it to him now, or wait for five years and then give it to Jimmy Fallon? That was a little harsh. I love Conan.”

Good: [Pulls mic out of back pocket, drops it, Jimmy Fallon emerges from wings, comes out and gives Barack a hug, exits, Barack pulls a second mic out of his back pocket.]
Bad: “Poor Conan, so bad he lost his show. Wait, what? He still has a show? What is a TBS? Is that a YouTube Channel? Is that like Pinterest? What is going on?”

“I know CNN has taken some knocks lately, but the fact is I admire their commitment to cover all sides of a story, just in case one of them happens to be accurate.”

“But the problem is, is that the media landscape is changing so rapidly. You can’t keep up with it. I mean, I remember when BuzzFeed was just something I did in college around 2:00 a.m.”

Good: “You’re welcome, BuzzFeed. I just legitimized you like a Glee cover.”
Bad: “There’s nothing like getting very, very high while watching squirrels water ski.”

“We need to make progress on some important issues. Take the sequester. Republicans fell in love with this thing, and now they can’t stop talking about how much they hate it. It’s like we’re trapped in a Taylor Swift album.”

“Now, speaking of presidents and their legacies, I want to acknowledge a wonderful friend, Steven Spielberg, and Daniel Day-Lewis, who are here tonight. We had a screening of their most recent film, Lincoln, which was an extraordinary film. I am a little nervous, though, about Steven’s next project. I saw a behind-the-scenes look on HBO — well, let’s just check it out. Roll the tape.”

Good: No improvements. This video is incredible.

Ray J's 'I Hit It First' Video: Just As Meaningless As Any Other Firstie

Chopped: All-Stars: Checking In With Our Old Celebrity Cook-off Pals Joey and Johnny