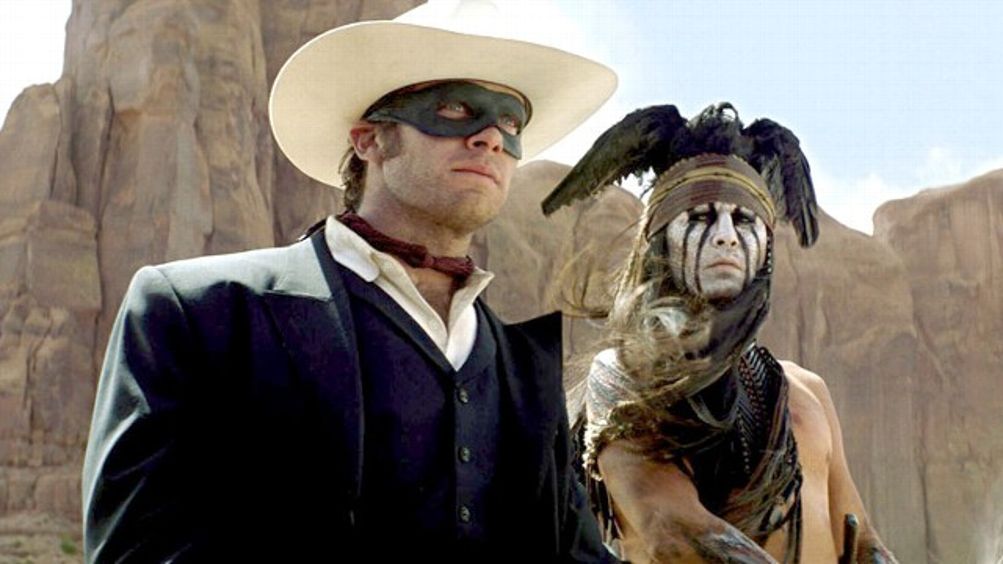 The Tonto that Johnny Depp plays in The Lone Ranger is covered in hardened, cracking war paint. You can’t see the star for the makeup. You often can’t see the makeup for the movie that contains it. And even though much of what there is to see here is handsome-looking — the mountainside horse trots; the swinging, swooping crane shots; the delicate balance of light from many sources, including the dental work of Armie Hammer — you hate to behold it. For it is awful and profligate, brainless and eternal, loud and cruel, a movie but not.

No 149-minute Western should feature more close-ups of timepieces than of horses or human beings. It should not spend a reported $250 million to feature a plot in which a railroad tycoon looks to bilk magnates of their millions. It should not see the fraught historical relationship between Native Americans and white people as the perfect occasion to test a new theme-park ride. But it’s summer. There’s money to spend and Johnny Depp to spend it on. You hate to watch a movie like The Lone Ranger if it makes a movie like World War Z seem profound, and it does.

You hate to watch a movie like this because its makers assume that the ideal audience enjoys being treated as if it were a packing peanut. You hate to think that all anyone involved with this movie thought was Pirates! Pirates! Pirates!, and there you are thinking exactly that. Gore Verbinski directed the film, for which three men received writing credit — Justin Haythe, and Ted Elliott and Terry Rossio, a pair who wrote the first Shrek and Pirates movies. As much as you’d like to say that the story of an uptight, masked lawman who teams up with a delusional Comanche in the name of justice is a fine seed from which to sow a visual-effects blockbuster, you also know this might be a lie.

You’re given a plot in which iconic characters created in the 1930s return seemingly because someone thought it’d be fun to stage a long, climactic sequence on two speeding trains. Before that, there’s the attempt at mythos. A boy dressed in a Lone Ranger mask and cowboy hat happens upon a wizened Indian (Depp) standing in a portion of an Old West diorama titled “The Noble Savage.” The Indian comes to life and proceeds to spin a yarn of how in 1860s Texas, when his skin was firmer and his posture more erect, he met a prosecutor named John Reid (Hammer) and saved his life after a nut-job outlaw (William Fichtner) shot Reid and Reid’s brother (James Badge Dale) and carved out the latter’s heart.

The undifferentiated mess that follows strains the capacity to care. There are too many scenes involving the dead brother’s dull wife (Ruth Wilson) and their young son (Bryant Prince) holed up with the mean, old train tycoon (Tom Wilkinson). Every once in a while I’ll be at a movie and find myself reaching for the remote. I don’t know whether my intent is to change the channel or fast-forward or hit stop, but for long stretches of this movie I felt the urge to reach. More than once I looked over at the friend I brought to make sure she was still alive.

I also looked over at her hoping for an answer to who this movie’s even for. People look at state-of-the-art mega-productions like this and assume that the dialogue and characterizations are as broad as they are because the movie has to sell action sequences that play well in movie theaters all over the world. Excusing the sound design, the finale is an ear-splitting silent movie. And given the movie’s near-Bollywood length, you can imagine other moviegoing cultures seeing the talking as a cue, say, to pee or hit the concession stand before the finale’s literal and figurative train wreck. Movies concocted for everybody risk boring a lot of people, and Verbinski, working again with the producer Jerry Bruckheimer, isn’t the kind of director who does well when the camera isn’t following a body as it plummets over the side of a boat or into a cart of rocks. He seems to like toys far more than the people scattered among them. That finale is the playful Saturday-matinee stuff of the original Lone Ranger radio and television shows. Yet it’s such a generic contraption that all you see are the cranks, pulleys, and gears. This isn’t the complete disaster of Wild Wild West, but that’s only because none of the $250 million was spent to turn Kenneth Branagh into a mechanical spider.

The assortment of bad guys signifies movie villainy. Fichtner, for instance, has a messed-up mouth whose crowning feature is a permanently visible gold front tooth. One of his hairy young henchmen dresses like a baby doll because, you know, queers. The movie teems with corruption and sadism, but you never feel the evil. Helena Bonham Carter is now veteran enough an actor to play the limping madam of Ye Old Wild West Brothel, but the movie can’t match even her dementia. What’s called for is the kind of cheap fun of something like 1999’s The Mummy. That movie knew it was stupid, but it believed in that stupidity: It had the comical professionalism of 1950s crap. It also had Brendan Fraser doing upside-down heroism. Armie Hammer has Fraser’s willingness to make a fool of himself, but Hammer is the more severely beautiful of the two. You feel like his Lone Ranger is making silly faces and doing goofy slapstick as contrition for Hammer’s looking as good as he does. But there’s nothing to the part he’s playing. So if you’re inclined to think of him as a tree (J. Edgar proved he’s not), all you can give him credit for here is stretching enough to play cardboard. But at least with him you can sense that he knows there might be children in the audience (the movie is PG-13) and that someone onscreen needs to be communicating with them.

I suppose Depp speaks to them, too. He gets mixed up in a lot of the stunt work, commits to some mildly amusing nonsense involving grapes, and spends most of the film with his nose turned up at all the killing and thieving and conquering as if to say, with Kanye West’s disdain: “White people.” Depp would get away with it if the movie were willing to give more of itself over to him the way the first Pirates of the Caribbean surrendered to his lunacy.

There are maybe three or four great summer-blockbuster performances, in which a movie’s energy and entertainment come from somewhere other than the effects department and the stunt crew. Martin Lawrence did that in Bad Boys II. Robert Downey Jr. did that in the first two Iron Man movies, and Depp did that his first two times as Jack Sparrow. But what’s Depp inventing here? His Tonto is a dignified stereotype in search of the farce this movie’s too expensive to be.

He’s Tim Burton’s other better half (Bonham Carter is Burton’s partner). But Depp’s now made five movies for Gore Verbinski, too. And over the last 10 years, more than half of the 18 movies that have prominently featured Depp have been directed and/or produced by those two men. It’s been a steady diet of corpses and caricatures. I think the price has been his humanity.

You worry that the more famous Depp has become the more he resents us for liking him. Seeing him alongside Channing Tatum and Jonah Hill in that 21 Jump Street remake from last spring was a welcome sign of life, as self-referential, self-reverential, and simply meta as it was. The first Pirates franchise transformed Depp from a very good actor into a man with an astronomical asking price. In the decade since, his trashed approach to stardom has gradually turned into shtick, just as it has for Downey. The difference is that Downey’s is fun and Depp’s is a parody of fun. Depp’s Tonto war paint speaks to the state of his stardom right now: dried out.