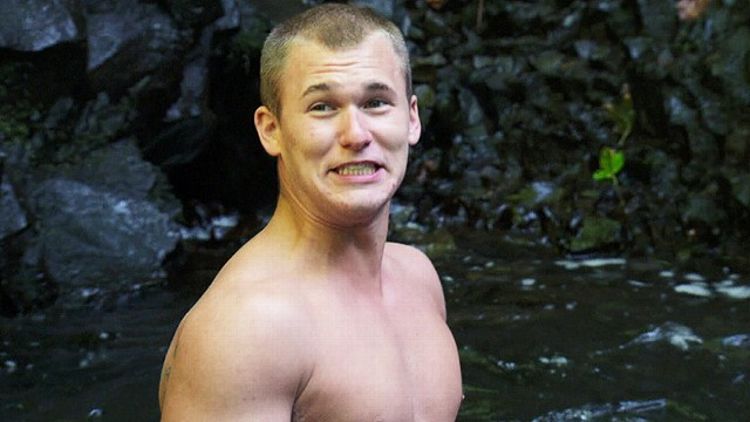 Jordan (Real World, Jacoby), 17 points: Jordan spends his nights slammered (12 points) and his mornings on damage-control patrol. He does this thing where he information-gathers about his own behavior and simultaneously defends it. It’s a tricky balance to strike. Last time we checked in on Jordan, he was a party to one of the weirdest confrontations in the history of history. His love/hate fight/flirt thing with Hurricane Nia was so layered in sexism, racism, and violence that it creeped me out to the point I couldn’t add commentary. Bad news: The morning-after fallout wasn’t any less creepy (5 points).

Now, it’s important to point out that neither Nia nor Jordan are innocent in this incident. The question isn’t who’s right and who’s wrong; it’s more who’s wrong and who’s wronger. And regardless of how provoked he was, Jordan, a white dude, used the n-word and made mocking monkey gestures toward Nia, an African American woman. Think about that. Yes, she harassed him, threatened him, and hit him … but Jordan is clearly in the wrong for obvious reasons. On the podcast, Juliet pointed out that Jordan was the recipient of a very generous edit from the Bunim/Murray folks. It’s true. As the episode progressed, Jordan gave a reasonably sincere apology and blamed his father for making him into an asshole and his suicide attempt.

This is bumming me out. When do we get to talk about the ranch dressing?

Johnny (Real World, Jacoby), 9 points: Pizza Schmizza is an interesting establishment. It claims to have pioneered pizza slices, it lets its employees get slammered (9 points), it has a quirky Twitter account (@schmizza), and IT SERVES RANCH WITH ITS PIZZA. When Ana asked Johnny to pick her up some pizza, she asked for extra ranch dressing. First off, ranch dressing on pizza is weird enough on its own, but EXTRA ranch? And it was on a Hawaiian slice. Pineapples and ranch on the same slice? This is clearly the questionable moment of the week.

Does it taste good? Is it a regional thing? Do you pour it on, or do you dip it? Do other salad dressings go on pizza? Or just ranch? Does only Ana eat ranch on her pizza? Does it cool down the pizza? Does the ranch get all over your hands? What does ranch have to do with, you know, ranches? Do cowboys eat ranch pizza? After a long day of cowboy stuff around the ranch, do cowboys crave ranch? What’s in ranch anyway? Onions and peppers and milk? Am I trying pizza with ranch this weekend? Oh, wait, I live in L.A.; we don’t have pizza here.

Everyone on Survivor (Survivor, Various Teams), 5 points: For the first time in 26 seasons of Survivor, Jeff Probst cried on camera. He did it while he was watching Brenda freak out when she saw her dad. Brenda is just so damn cute she could make anyone cry. Oh, yeah, EVERYONE cried on this episode. Which is nice because it allows me to do a Survivor crying power rankings as the GRTFL Top Five. The GRTFL Top Five this week is the Top Five Criers on Survivor listed from “That was a pretty normal cry” to “Did she, like, survive?”

I’ve excluded Dawn from the list because I can’t take her seriously ever since Juliet called her a loser on the pod last week and she voted off Brenda this week. I was really bummed about Brenda getting voted off until I realized it meant that next week we get dolled-up jury Brenda. I’m more excited for dolled-up jury Brenda than I am for the conference finals.

Nia (Real World, House), 5 points: Hurricane Nia HATES pants. The second she gets home, regardless of the time of day, company in the house, or the fact that she’s on national television, she takes off her pants. To recap: She sucks her thumb, argues all the time (5 points), doesn’t wear pants, and loves fast food. She’s a 6-foot, alcoholic third grader.

Marlon (Real World, Connor), 5 points: How did Marlon not kick Jordan’s ass last week when he was yelling at Nia, using the n-word, and making monkey mockery moves? How did he resist? Would he even get kicked off the show? Not only that, but he tolerated Jordan yelling at him the next morning (5 points).

Jessica (Real World, Kang), 5 points: Bunim/Murray should get one mulligan every season. One underperforming cast member gets the ax. Is anyone against this? Would anyone be upset if Jessica were replaced? She cried when Nia and Jordan were arguing. For no reason. She just started crying. At least Probst had an excuse.

Check back next week to find out if Cochran wins Survivor, if Hurricane Nia punches someone, and TO SEE DOLLED-UP JURY BRENDA!