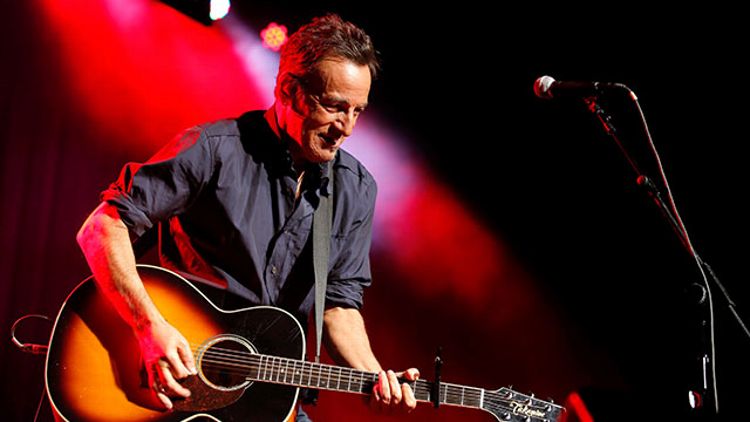 Given the time, resources, and encouragement, any music lover could teach a half-decent college class on any Springsteen-size artist. Drunk Uncle could improvise semester-long masterpieces on most of the acts featured in Rolling Stone’s “500 Greatest Albums of All Time.” But a course that explores “the theological underpinnings of Springsteen’s lyrics, and the songwriter’s reinterpretation of biblical stories”? Best leave that to the professionals — folks like Rutgers’s Azzan Yadin-Israel, who can just riff on this stuff, no problem.

“In some songs, Springsteen engages biblical motifs explicitly, as the titles indicate,” Yadin-Israel tells Rutgers Today (via Rolling Stone). “For example, ‘Adam Raised a Cain,’ ‘Jesus was an Only Son,’ ‘In the Belly of the Whale’ (referring to Jonah). But concepts with biblical resonance appear throughout his works (the Promised Land, redemption, faith), and it’s just a matter of taking the theological overtones seriously.”

Yadin-Israel, an associate professor of Jewish studies and classics who typically teaches “early rabbinic literature, the Dead Sea Scrolls, Jewish mysticism and Plato,” is taking this Bible/Springsteen stuff seriously as hell. Just as my mind starts brewing up a fresh pot of sarcasm — So was “Born in the U.S.A.” a modern day retelling of the Nativity? Was “Glory Days” about an especially idyllic period in Canaan rather than getting drunk and indulging small-town nostalgia? — Yadin-Israel schools me again:

“On a literary level, Springsteen often recasts biblical figures and stories into the American landscape. The narrator of ‘Adam Raised a Cain’ describes his strained relationship with his father through the prism of the biblical story of the first father and son; Apocalyptic storms accompany a boy’s tortured transition into manhood in ‘The Promised Land,’ and the first responders of 9/11 rise up to ‘someplace higher’ in the flames, much as Elijah the prophet ascended in a chariot of fire (‘Into the Fire’). Theologically, I would say the most dominant motifs are redemption — crossing the desert and entering the Promised Land — and the sanctity of the everyday. Springsteen tries to drag the power of religious symbols that are usually relegated to some transcendent reality into our lived world. In his later albums he also writes very openly about faith.”

Not to be forgotten in the redemption department, per the course listing on Rutgers’s website: Springsteen’s various meditations on “the possibility of redemption by earthly means (women, cars, music).”

So, yeah, it shows: Azzan Yadin-Israel has spent more time connecting these dots than most of us have spent doing anything. My jokes have been canceled. I’d try saying Rutgers missed an opportunity by not offering a class about how Springsteen functions as a religious experience for his fans (the Boss was inspirational enough for New Yorker editor-in-chief David Remnick to spill 15,000 words in 2012; ditto for rock writer Jon Landau and what’s been called the most famous concert review of all time), but Yadin-Israel has that covered, too. “Springsteen’s work will also be situated within the broader poetic tradition that casts the writer as a religious figure whose message does not effect transcendent salvation, but rather, transforms earthly reality.” Guy’s got a PhD in STOPPING ME IN MY SKEPTICAL TRACKS, KNOW WHAT I’M SAYING?

Every album, from 1973’s Greetings From Asbury Park, N.J. to 2012’s Wrecking Ball, has some lyrics represented in the course. The whole ride is one semester long, because that’s plenty of time; if they squeezed geology and astronomy each into single-semester classes, they can do it with the career of a man from New Jersey. Time points out that similar Springsteen-revering courses have already played out in academia, at least in the tri-state area. One, a Princeton sociology course, was titled “Bruce Springsteen’s America.” Rutgers’ offering is simply called Bruce Springsteen’s Theology, but they could still slap a sign on the door that says BOS-101.

The hands-down best thing about the Rutgers course is that it features a light workload and serves as nothing more than an introduction to college-level research. Yadin-Israel says there is “a relatively relaxed classroom setting” and “no expectation that anyone will become a Springsteen scholar.” Basically: Have fun talking about music with your new friends and your cool professor, very recent high school graduates.

News Alert: It Is Possible Kate Upton Will Be the Female Lead in the Entourage Movie

Let's Talk About Celine Dion: Why She Still Matters