Turn Off Your Brain and Enjoy Gaslight Anthem’s ‘Get Hurt’ 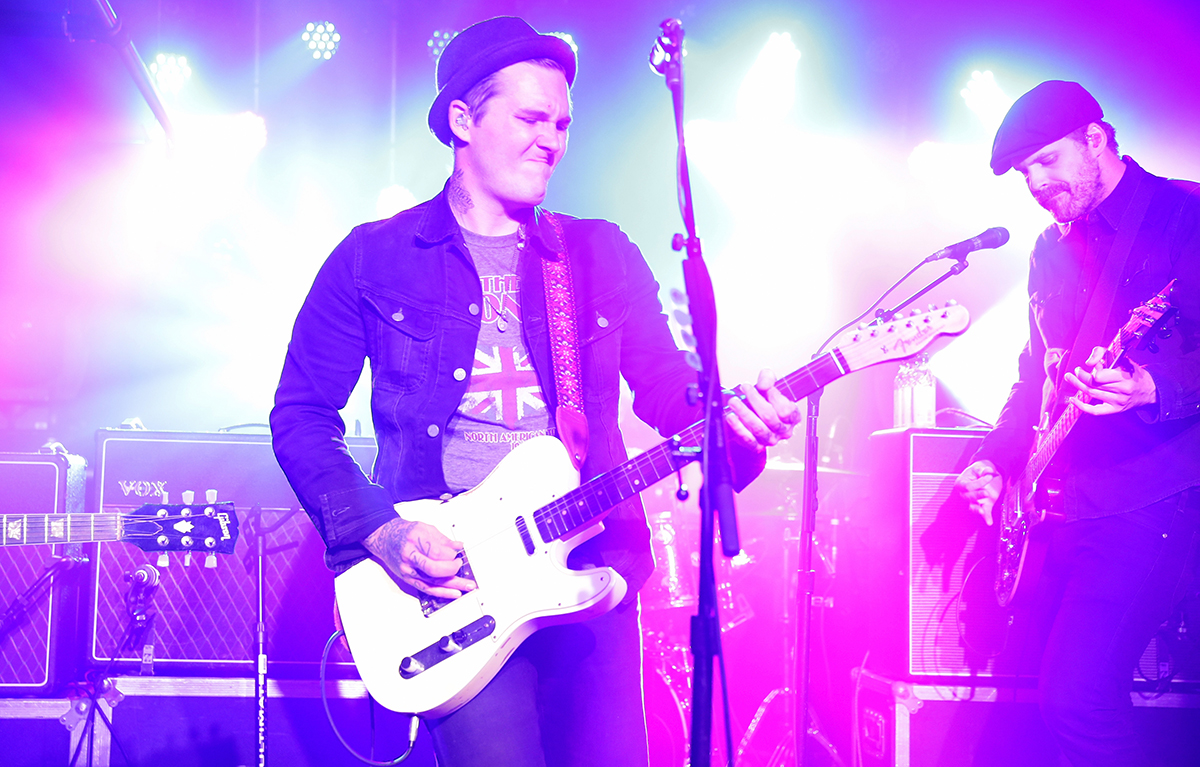 Anytime a piece of entertainment that’s perceived to be populist is analyzed by a professional critic on the Internet, someone will inevitably post a comment at the end of the article more or less stating the following: “This piece of entertainment that I, the commenter, perceive to be populist should not be analyzed critically. It should just be enjoyed, in a strictly unthinking manner, which is a principle that I understand far better than this supposedly intelligent smarty-pants writer.”

For a professional critic working on the Internet, this sort of comment is obviously frustrating. Imagine working as a waiter in a restaurant, taking an order from a customer, delivering to the customer exactly what the customer ordered, and then hearing the customer reply, “I dispute the legitimacy of this food’s existence.” That’s what this sort of comment amounts to. In other words: If a reader doesn’t want critical analysis, why read something that is clearly presenting itself as criticism?

The answer, of course, is that the reader wants the critic to reenforce what he already believes. And the reader wants to believe that everything he likes is also good. But that isn’t true, for the reader or for anybody. We all like at least a little trash. Take me, a professional critic working on the Internet. Occasionally, I’ll come across something I enjoy that I know will not withstand even a modicum of critical thought. At this point, I’m faced with a professional/personal dilemma: Do I serve my brain or my emotional pleasure center? Because I’ve got mouths to feed, I’m required by professional obligation to go with my brain most of the time. But in the case of the Gaslight Anthem’s new LP, Get Hurt, I feel compelled to not go with my brain.

The Gaslight Anthem is a rock band from New Jersey. Get Hurt is their fifth album. The Gaslight Anthem is frequently compared to Bruce Springsteen, for reasons that are superficial (they’re both from Jersey) and substantive (GLA’s singer-songwriter Brian Fallon is clearly aping a Boss-like gruffness in his vocals). Fallon naturally hates being compared to Springsteen, with some justification. In reality, GLA is to Springsteen what Muse is to Radiohead — an exaggerated reflection as seen through a fun house mirror.

In interviews promoting Get Hurt, Fallon has frequently used the word “different” to describe the album’s sound. As far as I know, “different” does not have a sound. In my experience “different” is an adjective used by middle-aged Midwesterners to gently dismiss anything that’s culturally interesting. But I understand what Fallon is getting at. GLA’s previous release, 2012’s Handwritten, was the band’s first LP that even my ignorant heart couldn’t endorse. I hated Fallon’s vocals — it sounded like he overdubbed throat gurgles over his already mannered, self-consciously craggy bark. On my favorite Gaslight Anthem record, 2008’s The ’59 Sound, Fallon’s distance from his heroes gave the album a heart-rending subtext — he sounds like a guy trying to will himself into the fantasy world of classic-rock lyrics. It was a record composed of rock clichés that also seemed to be about rock clichés. The thinky part of me could get behind that. (My heart would like to add that the song “High Lonesome” makes me want to drive real, real fast.) The overwrought Handwritten, meanwhile, was less about a mythical idea of New Jersey than just a straight-up evocation of New Jersey.

And yet, in spite of retaining Handwritten’s lobotomized arena-rock durrness, I find myself enjoying Get Hurt more. Why? Because it’s different maybe? That actually makes perfect sense so long as I don’t think about it for even a second.

Now, I’ve been playing Get Hurt constantly for the past several days. And whenever I’ve allowed my brain to intrude on the listening process, I find that I don’t like Get Hurt much at all. The suggestion that Get Hurt is some kind of experimental curveball is confounding. As far as I can tell, the quirkiest diversions on Get Hurt involve songs (like “Stay Vicious” and “Helter Skeleton”) that have loud verses and soft choruses, rather than the standard soft verse–loud chorus formula. This is what passes for radicalism on a Gaslight Anthem record — instead of steak with a side of potatoes, on Get Hurt you sometimes get potatoes with a side of steak. And then there’s the unsuccessful mood piece “Underneath the Ground,” in which Gaslight Anthem tries to sound like the National, which is like Scent of a Woman-era Al Pacino hoo-ahhing his way through The Godfather Part II.

On previous Gaslight Anthem albums, Fallon affected a storyteller’s stance, spinning yarns about girls named Maria who listen to Elvis on the radio. On Get Hurt, Fallon sticks to first-person narratives drawn from his recent divorce, though his nonfiction is as lacking in specificity as his fiction. “I have pills for this, and tabs for that,” he says on “Stay Vicious.” “I keep my wounds without a bandage, baby,” he says on the title track. “I’m on the 99th floor of apathy,” he says on “Helter Skeleton.” Are these confessionals or lines from a Vin Diesel movie? On Get Hurt, Fallon is livin’ his life a quarter-mile at a time.

Therein lies the unthinking, gut-level appeal of Get Hurt for me — this is where I remove my critic’s hat — which is that it’s the musical equivalent of a cheesy summer blockbuster where cool tough guys make dumb tough-guy talk sound cool. Lyrically speaking, the most ridiculous song is “Stray Paper,” in which Fallon purses his lips soulfully like Nic Pizzolatto with slightly less purple prose:

Now, if I analyze “Stray Paper” it vaporizes like teenagers under fire (?) from kisses (??) deployed by somebody named August (?????). But if I focus solely on how Fallon delivers this baloney with McConaughey-level conviction, I actually believe it. My cognitive activity has been neutralized in the process, but still, I’m locked in. The success or failure of Get Hurt hinges solely on Fallon’s salesman game — if you buy him, you’ll buy anything he says. And damn it if he doesn’t get me to buy in, even after I intensely disliked Handwritten. If Gaslight Anthem’s last record proved anything, it’s that Fallon can’t afford to push any harder than he’s already pushing. The strain of ramping up the bluster was fatal to Handwritten; on Get Hurt, he sounds relatively relaxed and confident in his scaled-down fantasies.

Here’s the thing about the loud-soft “experimentation” on Get Hurt: It kind of works sometimes! Like on “Selected Poems,” which starts off as more downbeat National-lite, and then explodes into a totally bitchin’ stomper. I was legitimately surprised the first time I played it. I slapped my head and tossed my feces in an approving manner.

As a songwriter, Fallon’s core talent is his ability to take uplifting music and lyrical hogwash and assemble them into broadly appealing packages that make groups of individuals reflexively hug one another. If your head isn’t immediately wrapped up in an affectionate choke hold the moment the music comes on, the Gaslight Anthem will have already lost you. But what I really feel for Fallon on Get Hurt is envy. He has constructed a life that allows him to communicate solely (and with surprising effectiveness) in the language of rock-and-roll myth. He has fully crossed over into that world, Purple Rose of Cairo-style, as I’ve wished to do on numerous occasions. Where Fallon once merely referenced Tom Petty on The ’59 Sound, on Get Hurt he’s written the finest Tom Petty song in years, the winsome ballad “Break Your Heart,” though with a Dieselesque ring.

“And you can lean on me until your heart don’t beat,” Fallon croons, nonsensically, poetically.

Filed Under: Music, the gaslight anthem, Bruce Springsteen, get hurt

Do You Like Prince Movies? Podcast: A Look Back at Robin Williams's Career