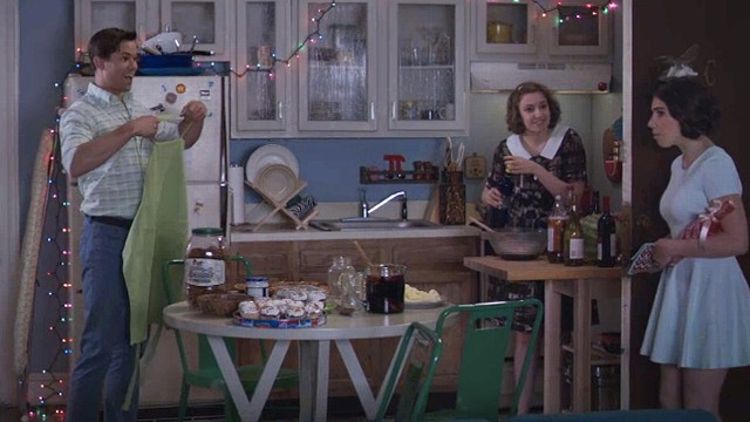 This season on Girls, our titular quartet and friends are “almost getting it kind of together,” as printed on ubiquitous bus bench ads for the second season. Making it in a big city means different things to different people, but there are some agreed-upon markers that most people tend to grasp for as they flail through their 20s, mostly having to do with careers and relationships. I’ll be keeping tabs on how the characters of Girls try to get it together; their plans, the realities, and whether it brings them any closer to growing up.

Adam’s cave, so sexually tropical to Hannah last season when she only viewed it in horizontal glimpses near dawn, is revealed for what it really is: a dingy, airless emotional torture chamber. Feeling responsible for the brief encounter with a speeding truck that has left Adam bound to his dark apartment, she keeps dipping in to take care of him. The overpowering lust Hannah once had for Adam’s weird brand of sexual charisma is an embarrassing memory, a reminder of everything she’s trying to leave behind in the past. But she takes a little pleasure in watching him plead. As much as she finds herself repulsed by his desperation to be with her, she still keeps coming by and sometimes even falls asleep there. Or maybe it’s all a kind of advanced sexual role-play with a Misery theme. Turns out Hannah doesn’t go for Adam’s overtures anymore because she’s been bouncing on Donald Glover’s childish gambino. Having sworn off her old identity as clingy and insecure, she’s reinventing herself as cavalier. But despite the success she has with this new persona, she knows that on some level it’s just a pose. Either she’ll sink into it so well that the mask becomes her real self, or a puncture wound will cause all her neurotic anxiety to spill out at once.

Remember the Seinfeld episode “The Opposite,” where Elaine and George switch places, and his life gets better while hers falls apart? Elaine gets dumped by her boyfriend and kicked out of her apartment, lamenting that she has “become George.” Now Marnie has become George. She’s bounced from her job as a gallery girl by her pigtailed delusional downtown diva boss. Her mom (Rita Wilson) boasts of being a sensual free spirit, while needling Marnie for looking haggard and being uptight. Some people thrive on chaos, but Type A girls like Marnie need structure to function. Without it, life becomes a series of invented reasons to day-drink. Boyfriendless, Marnie hooks up with Bobby Moynihan and Hannah’s gay ex. What Marnie needs is a mentor, but all the adults in positions of power around her are silly. Craving closeness, she takes advantage of Charlie’s inability to ever fully shut the door on their relationship. Their sleepover is ostensibly platonic, but platonic sleepovers always have a subtext.

Sages her girly apartment to dispel the spirit of a guy who hurt her feelings. Uses the karaoke machine at Hannah’s party to sing Sean Kingston’s “Beautiful Girls” with an emphasis on the “suicidal” lyric. Wears a powder-blue skater dress with a fascinator and looks like she wouldn’t be out of place in Mad Men’s early ’60s, although it’s not necessarily what Joyce Ramsay would’ve worn. Provides the single most GIFable moment of the episode when she DJs with a Solo cup on one ear to herself. Glides nonchalantly through the party that everyone’s ex-boyfriends attend. Conducts herself with dignity in the coat room with Ray at first, but finds herself overwhelmed by Alex Karpovsky’s animal magnetism.

Spotted briefly getting in a cab with her random-ass husband, Thomas-John (Chris O’Dowd), on the way back from Mexico. This might have established a time frame of how much time has elapsed since the wedding, but with a girl like Jessa, who knows how long the honeymoon lasted? Jessa sports a half-head of tourist cornrows and has no idea where she lives. For her, this is a new height of responsibility.

Although their party went pretty well and their apartment looks great, the grimacing over-enthusiasm that Elijah and Hannah keep showing for their new living arrangement doesn’t bode that well for the future. It could become the kind of roommate relationship that burns too bright, eventually leaving nothing but resentful embers and undone dishes in the sink. Elijah avoids confronting his sugar daddy because it means facing his financial destiny without the extra help he’s become accustomed to. He acts on an attraction to Marnie, perhaps drawn in by her slight resemblance to C.J. Cregg, but they find themselves unable to consummate the act for longer than a few seconds. Marnie is downright hostile about her frustration, but she also probably only really wanted to fuck Elijah out of anger and general sexual competitiveness with Hannah. But also Andrew Rannells looked good. Even Bret Easton Ellis commented on his “fearless” performance as Elijah. Probably because he liked the casual depiction of male bisexuality, a hallmark of BEE’s work.

Adam Sackler is his body, and with his instrument out of commission, he reverts to an infantile state that resembles a deep depression or very old age. Unable to hunt, he is reduced to scavenging, utilizing whatever texting skills he has left to guilt Hannah into hanging out with him while he suffers and bitches about it. Absent his physical vitality, he is nothing but a bag of needs, oozing fluids and complaints. Hannah tolerates him, but she increasingly wonders why she ever thought he was so awesome. The spell has been broken. He won’t feign interest in Bye Bye Birdie, which Hannah puts on because she no longer cares what he wants to watch. Adam is so stricken by his injury that he barely even puts up a fight. It’s still unclear if Adam’s change of heart toward Hannah is motivated by her sudden lack of interest. For someone who prided himself so much on his self-reliance last season, he sure is a big baby when it comes to tolerating pain, both physical and emotional.

Poor sweet Charlie, born to be bossed around by pretty girls who don’t respect him because they think he has no backbone. While Marnie is all focus and drive in need of a target, Charlie just goes in whatever direction he is pushed. His new girlfriend is conveniently terrible, which allows him to passive-aggressively get back at her by letting Marnie come over to snuggle. But ultimately that’s just more self-sabotage. What Charlie really needs are new friends, or he’ll risk running into first love, Marnie, at every party for the rest of his life.

Who blows someone off because they use emojis? Emojis are the universal language of love.

Sexy Back? Four Thoughts on Justin Timberlake's 'Suit and Tie'