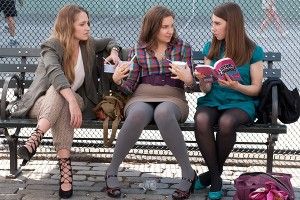 As THR points out, Judd Apatow did a long interview with Movie City News (embedded below), during which he let go some info about Girls, which he executive produces. “And [Lena Dunham]’s such a great writer and great person,” he says, “she helped me with my script” — note: He doesn’t specify if that means the script for This Is 40, or another upcoming work — “we’re trading scripts back and forth, and I get inspired by reading her work every week.” Oh, and: “We’re about to shoot the third season of Girls, season two starts in January.” The thing is, no one had actually said Girls got a third season. Whoops?

Deadline follows up, reporting that HBO is “working on a deal to bring back executive producer Jenni Konner, who has been co-running the show with … Dunham. Once Konner is locked in, the show is expected to move on to doing writer staffing deals in anticipation of a pickup … Many networks and studios move in to make if-come deals with writer-producers of their hot shows before the official renewals in order to lock sought-after scribes and be able to hit the ground running when the pickup is made.”

As has been noted, this would be a particularly early pickup; usually, the network doesn’t pull the trigger until at least the beginning of the season before. And, while unofficially they may have already made their decision, outwardly, it looks like HBO wants to stick to tradition. After Apatow’s possible slip of the tongue, the network followed up by saying “We’re looking forward to the launch of season two and hope to have good news shortly thereafter.” That certainly doesn’t sound like a no!

So, preemptively, congratulations, Lena Dunham, on an excellent offseason — from your multi-million-dollar book deal to your super-early Season 3 pickup to that time you got naked with cake at the Emmys, you continue to make young people everywhere seethe with jealousy while cursing their own lack of work ethic. Can’t wait for Season 2!

(Skip to 34 minutes in for the relevant parts.)