George Lucas Is Not Nearly Done Quibbling With Fanboys 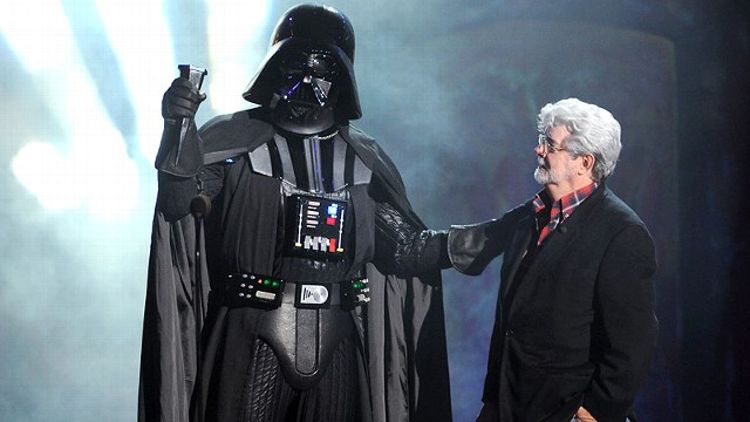 Last month, George Lucas sat down with Grantland’s Bryan Curtis for the New York Times Magazine to plug Red Tails, and revealed some surprising personal details. Most pressingly: He knows exactly what the Star Wars fanboys are saying about him. “Why would I make any more [Star Wars movies],” Lucas complained, “when everybody yells at you all the time and says what a terrible person you are?” And now that that particular cat is out of that particular bag, it looks as though Lucas is primed and ready to keep the shots coming. In a conversation with The Hollywood Reporter plugging the 3-D re-release of Episode 1 — The Phantom Menace, Lucas had all kinds of delightful things to say about the progressive bastardization of Star Wars.

So, George, why do you keep messing with a good thing?

“Changes are not unusual — I mean, most movies when they release them they make changes. But somehow, when I make the slightest change, everybody thinks it’s the end of the world. That whole issue between filmmakers and the studios with the studios being able to change things without even letting the director of the movie know … I’m very much involved in that [so that’s not happening here]. … My job is to try to make the best possible movie it can be.”

But, bro, weren’t the movies pretty good to begin with? Isn’t that why everybody liked them so much?

“If you look at Blade Runner, it’s been cut sixteen ways from Sunday and there are all kinds of different versions of it. Star Wars, there’s basically one version — it just keeps getting improved a little bit as we move forward. … All art is technology and it improves every year. Whether it’s on the stage or in music or in painting, there are technological answers that happen, and because movies are so technological, the advances become more obvious.”

OK, but can’t you accept that movies aren’t only technological? Don’t you get why people get so upset when changes are made to characters or plot points?

“Well, it’s not a religious event. I hate to tell people that. It’s a movie, just a movie. The controversy over who shot first, Greedo or Han Solo, in Episode IV, what I did was try to clean up the confusion, but obviously it upset people because they wanted Solo [who seemed to be the one who shot first in the original] to be a cold-blooded killer, but he actually isn’t. It had been done in all close-ups and it was confusing about who did what to whom. I put a little wider shot in there that made it clear that Greedo is the one who shot first, but everyone wanted to think that Han shot first, because they wanted to think that he actually just gunned him down.”

Gaaaah, Han shot first! Han. Shot. First. He was doing it in self-defense; Greedo would have killed him. But Han shot first. More important here: How smug do you have to be to dismiss your fan base’s passion while plugging a 3-D version of a movie that no one likes but more or less feels obligated to pay money to see again because of that passion? Hopefully, Lucas realizes the reason he can continue to churn billions of dollars off of Star Wars spinoffs and children’s cartoon adaptations and T-shirts and lunchboxes and whatever the hell else he’s cooking up next is because so many people see Star Wars as a quasi-religious event. And the flip side of that is they’ll complain and yell and dig whenever someone messes with their beloved — even, or especially, if it’s their beloved’s creator. This is the burden you are saddled with. Sorry, man. Also, Han shot first.

Spending Some Quality Time With the Sorority Girls UK