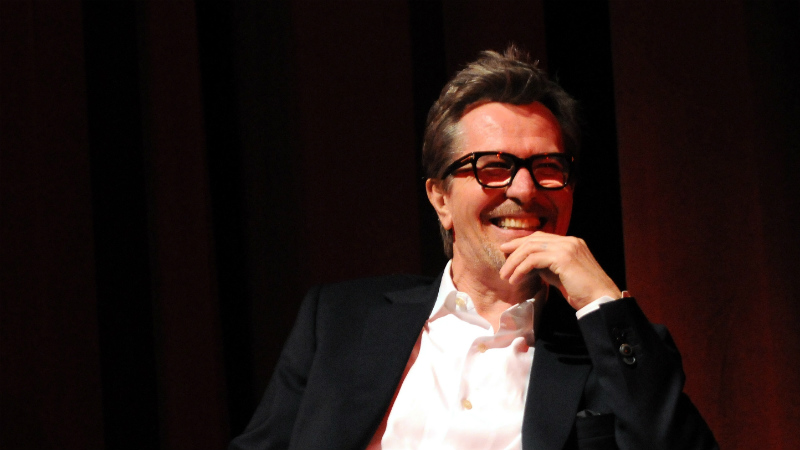 If you only go so far as the intro in Playboy’s new corker of an interview with the irascible Gary Oldman (soon to be seen in Dawn of the Planet of the Apes, which, side note, I haven’t yet seen but is already my favorite movie of all time), you’ll have gotten your money’s worth. That’s where we learn that Oldman’s longtime manager, production partner, and interview tag-alonger is Douglas Urbanski, the conservative radio talk-show host who played a Winklevoss-eviscerating fake Larry Summers in The Social Network — I mean, I love fake Larry Summers! This is an unexpected, delightful, and nearly unusable-in-casual-conversation piece of information!

Oh, but there’s more. In a freewheeling chat, Oldman sounds off on love, family, fans, movie stars, earthquake sex, the tragically misunderstood Mel Gibson, and his own son’s insipid hopes and wishes. Clearly having psyched himself up for the longform Playboy Q&A (he mentions having looked up Kubrick’s own sit-down with the magazine at some point), Oldman lets loose, channeling Chief Keef to give us his own long list of passionate likes and dislikes (no word on his opinion of sneak dissers). Herewith, then, a one-off edition of Gary Oldman’s Cheers and Jeers.

Cheers to: the third person.

PLAYBOY: What’s your view of the future? Are you optimistic about where society is heading?

Jeers to: the future of society.

OLDMAN: I think we’re up shit creek without a paddle or a compass.

“I have two teenage sons and they occasionally turn me on to stuff — Arcade Fire, hip-hop or whatever. I go, ‘Wow, that’s interesting.'”

Jeers to: children these days not learning about hierarchy in a group.

“There’s never any unsupervised play to develop skills or learn about hierarchy in a group.”

“There’s an amusing story about a trip up to San Francisco fueled largely by vodka and timed perfectly to the big 1989 earthquake. We were literally at the epicenter. Afterward it was like, ‘Well, was it good for you, darling? Because the earth definitely moved for me.'”

“I remember the flight deck [for Air Force One] was on a sound stage and there was a big sign that said NO DRINKING, NO SMOKING AND NO EATING ON SET. At one point I looked over and Harrison was in the doorway beneath the sign with a burrito, a cigar and a cup of coffee, which I thought was hilarious. I could never get the image out of my head.”

And now we can’t, either. Eating a burrito while smoking a cigar?? What does Harrison Ford know that we don’t?

Jeers to: his son’s dreams.

“One of my sons wants to be a photographer. I said to him, ‘Why do you want to rob the bank when it’s already been burgled?’ There’s no livelihood there … So I said to him, ‘Look, I don’t know how you would earn a living, but if you’re passionate and this is what you want to do, boy oh boy, you’ve got to have a point of view. Are you going to be a fashion photographer? Are you going to be a journalistic photographer?’ It’s great to just sit there and go, ‘I just want to take pictures, man,’ and f— off to college for two years that I’ll pay for. Wedding photographer? You need a singular purpose.”

Jeers to: how “no one can take a joke anymore.”

Specifically when it comes to Mr. Mel Gibson! Says Oldman:

“He got drunk and said a few things, but we’ve all said those things. We’re all f—ing hypocrites. That’s what I think about it. The policeman who arrested him has never used the word n—– or that f—ing Jew? … So they persecute. Mel Gibson is in a town that’s run by Jews and he said the wrong thing because he’s actually bitten the hand that I guess has fed him … But some Jewish guy in his office somewhere hasn’t turned and said, “That f—ing kraut” or “F— those Germans,” whatever it is?”

Is this Allied territory in 1943?!! Oh my god, what the hell is Gary Oldman talking about?

Filed Under: Movies, Gary Oldman, dawn of the planet of the apes, Mel Gibson