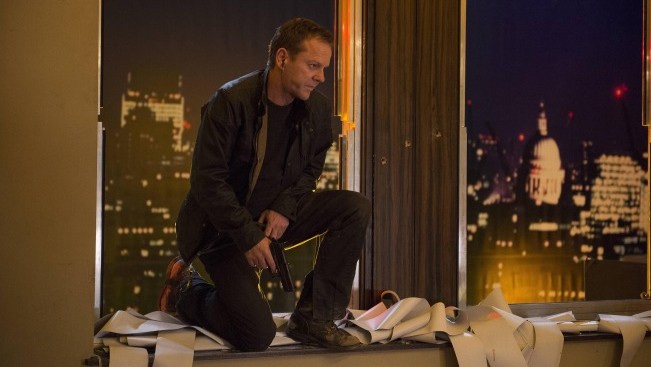 CIA Head of Station Steve Navarro (Grand Wizard Benny Bratts), CIA Comms Chief Jordan Reed (The Analyst Who Knew Too Much), Jack Bauer (Kiefer, son of Donald), Chief of Staff Mark Boudreau (husband of the year, chief of staff of the year, traitor to America of the year).

In case you forgot, Margot and son just shot a missile at the president of the United States of America. In Wembley Stadium. But somehow, he’s not dead, because there was no silent clock at the end of Episode 8. Unless, somehow, silent clock rules don’t apply to shortened seasons of 24, in which case President Heller is so dead.

Watching the news coverage of the attack in a room are the prime minister, Scar Boudreau, Audrey, and a handful of others. The prime minister offers his condolences to Audrey, she thanks him, looks at her “husband,” and walks right past him. And then, suddenly, the prime minister’s aide says, sinisterly, “Let’s just hope Al-Harazi keeps her word.” Remember her? 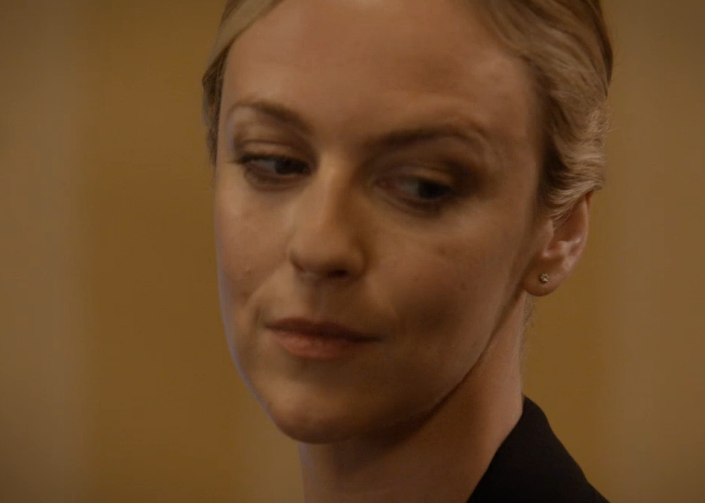 She’s up to something. I don’t know what it is, but from the first time I ever saw her face, I knew she was not to be trusted.

After a visit to the CIA, we go to Margot’s Terror Camp, where her son is destroying the remaining drones. With one left, he asks his mom if she’s sure and Margot continues to tell him that if Heller held up his end, she’d hold up hers. But right before he prepares to dump the final weapon of terror, he spots something.

“Something’s not right,” the terror boy says. Margot freaks out and wants to know what’s wrong. Which she has a right to know, because something is very wrong.

THEY LOOPED THE TAPE.

THEY WENT SPEED ON MARGOT.

MARGOT AND SON GOT DENNIS HOPPERED.

My thing is, if you’re going to be a terrorist, how do you not watch Speed? It’s almost like you want to fail. And fail they did, because Heller’s definitely still alive and Margot is close to losing the last drone.

I can’t wait to find out how Bauer and Chloe pulled this off. Because look at my guys: 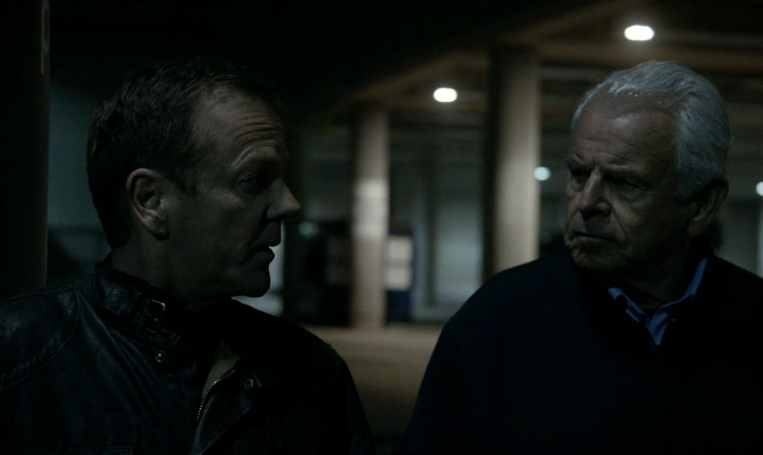 While a not-dead Heller is something to certainly celebrate, also remember this: Boudreau sent Heller to die and Bauer figured out a way for Heller to live. I wonder how that’s gonna sit with Audrey. My man Mr. Steal Your Girl, at it again.

Jack tells Heller that the plan worked and that all the drones have been dumped, but then Chloe alerts him that there’s one more that is headed back to land. They now know Margot figured out the tape loop. Heller’s mad at Jack for not letting him go through with it, but Jack tells him it was the right call. Heller wants to get taken back to the presidential quarters and Jack tells him he needs to lay low. Jack tells Heller to get in the car.

And Heller gets in the car. For all intents and purposes, Jack Bauer is currently the president of the United States of America.

Heller sits in the car with Jack’s guy (who refuses to let Heller call the Secret Service) and Jack heads out via helicopter.

Following this, Jack gets on a call with every single person who’s important. The CIA and the prime minister’s crew and the president’s crew are all on speakerphone. He tells them that Heller’s still alive, that five drones have been dumped, but that there’s one that needs to be intercepted. Either that or they need to find Margot before it’s launched. And he tells them Chloe needs all the support she can get. So, like old times, Jack and Chloe are running point to save the world. And it was good.

Before hanging up the phone, Audrey calls out to Jack. And says “thank you.” You know, the way someone says “thank you” when you bring them breakfast in bed. 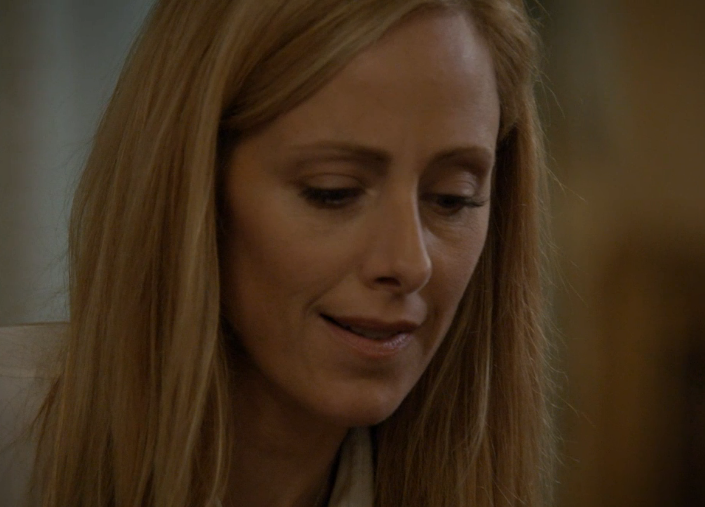 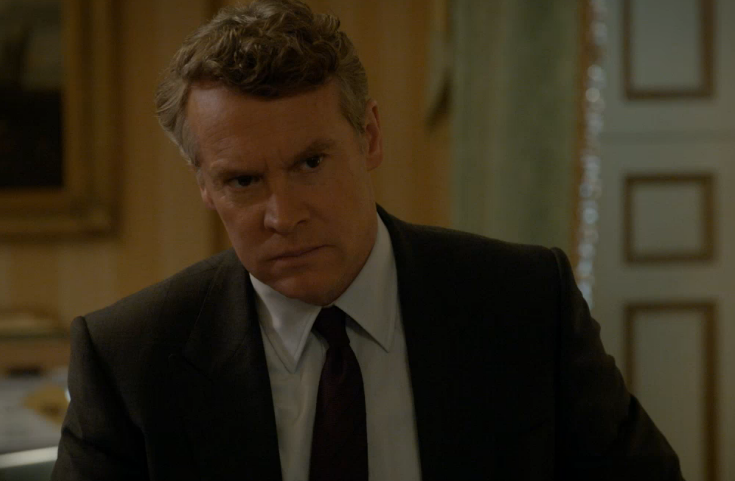 Back to Terror Camp and they’re still freaking out. They’ve confirmed Heller as alive and the Terror Boy wants to know if they should shoot at Heller. But Margot says no. Because Margot is pissed. Because she just got stood up at the altar by Heller. And she wants payback. She wants him alive, so he can feel responsible for the final attack, which will take place at the Waterloo train station.

Bauer and Chloe get back on the phone and Jack’s looking for her to give him any type of lead. She says she has an idea and calls the sometimes good, sometimes bad Adrian. He has a program that can narrow down a location and does it for Chloe. 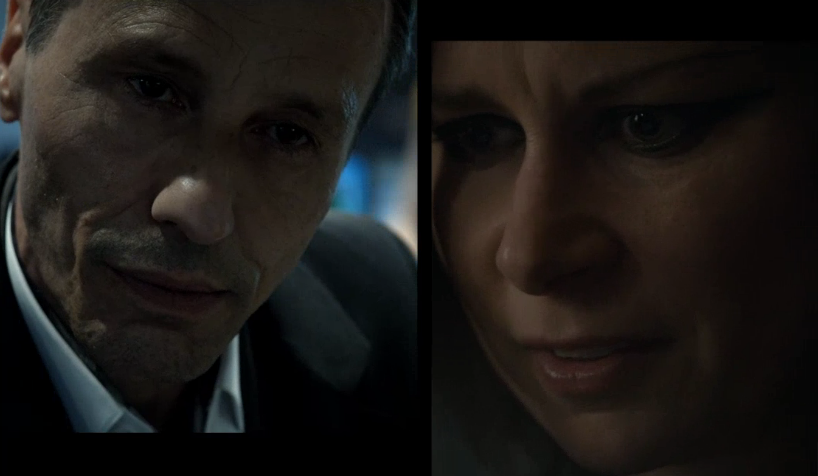 And like that, Chloe has Margot’s location. That is, unless Adrian is screwing her over. Which I really hope he isn’t. Actually, he definitely isn’t. He’s got no horse in this race, outside of making Chloe his boo again. He’s definitely telling the truth.

Lil Bauer The Kate and Ritter show up to the location a few moments later and immediately get shot at. So yes, this is the right location.

Bauer heads to the room, but gets immediately shot at and has to retreat. Which isn’t good, because that USA drone is going to fire at Waterloo station in three minutes. But three minutes in Bauer time is like five minutes of stoppage time for Portugal. An eternity.

(I should have put a trigger warning above. Because nothing’s more NSFW than this.)

Back to fictional international conflicts: The CIA backup team, led by Lil Bauer The Kate and Ritter, has made its way into the building. Everyone’s headed to Margot, hopefully sooner than later.

In that room, Margot has just pulled a gun on her son. He wants to leave, now that everything’s programmed to fire, so he doesn’t die. But Margot’s not having it. 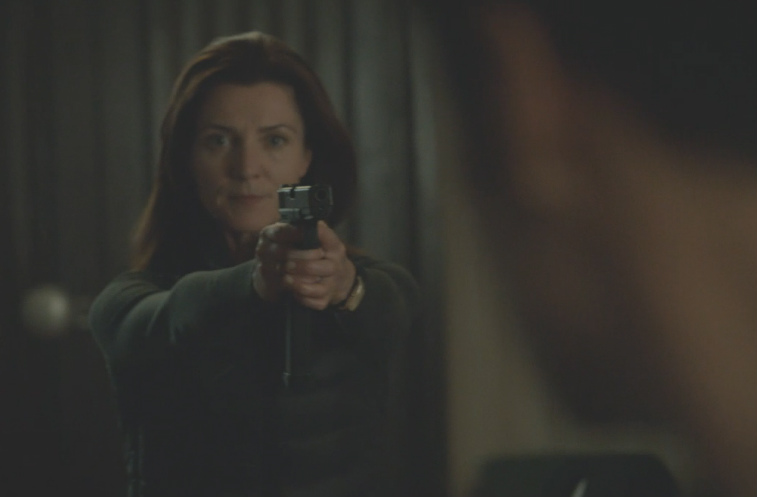 So he stays. Because they’re all in this together.

And they see that. 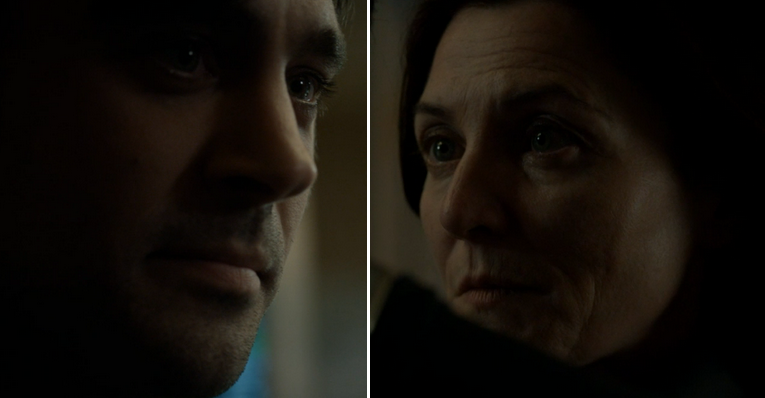 They’re all in this together.

Take out all the terrorism and it’s pretty touching. 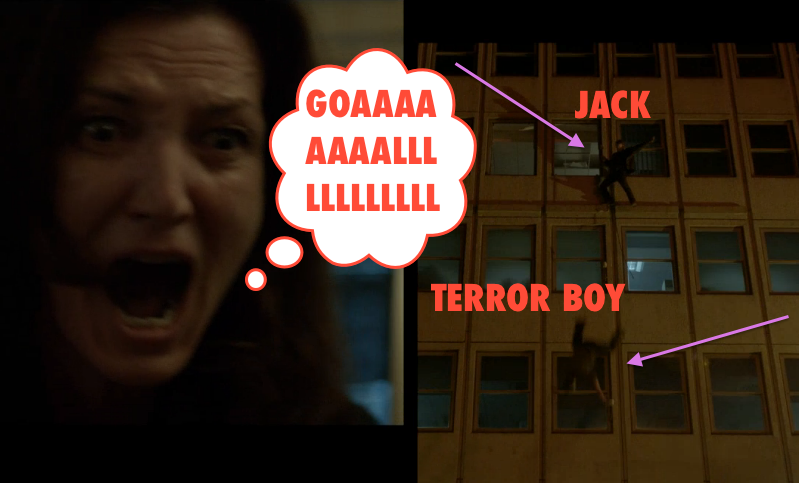 After throwing the boy out of the building, Jack gets in the room, shoots Margot in the leg, apprehends her, grabs the joystick, and as the missile is headed toward the train station, guides the missile into the river with Pole Position ease. 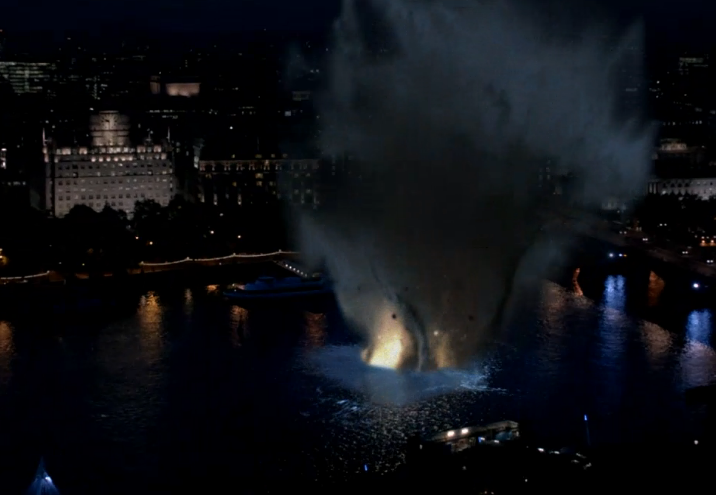 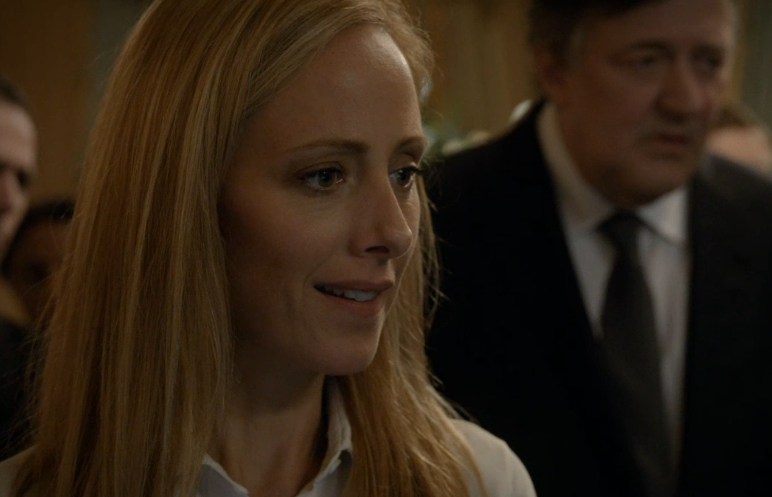 Even Boudreau is smiling at this point. He knows he’s lost his girl, so he might as well celebrate avoiding a terrorist attack. The room is celebratory. For the most part …

While the prime minister is praising the British lord, you have our lady on the left and the man with the hair on the right. Something’s been off with them, independently, the entire day. But their visible concern in this time of joy almost assures they’re evil, transatlantic moles.

Back to the Terror Camp, and Margot’s yelling at Jack about some nonsense. So Jack throws her off the roof. That’ll probably come back to sting, but we’ll deal with that later. BECAUSE TUPAC BACK. 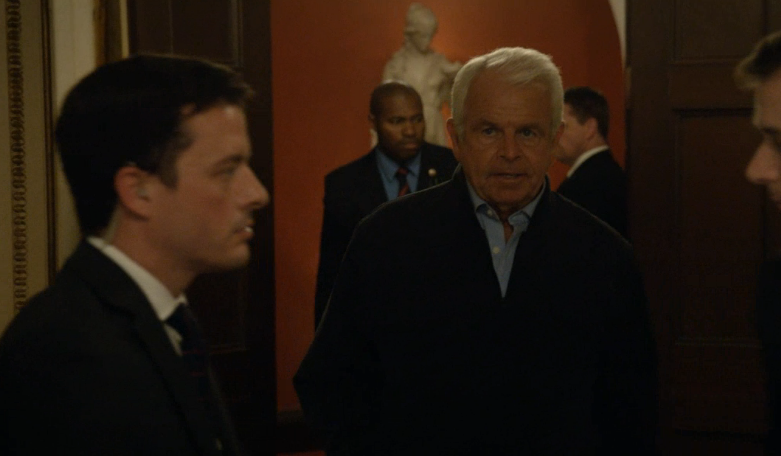 After a chummy scene with everyone cheering Heller’s non-death, we go to Lil Bauer The Kate, who gets a call from one of her friends. He found The Analyst Who Knew Too Much. Dead. And then he tells her there’s a second man next to him, also dead. Lil Bauer and Ritter head to the scene, but not before calling Benny Bratts and telling him the news. He acts surprised, because he’s a villain, and then retreats to his office, plugs his phone into the Terror Mophie, and calls Adrian. 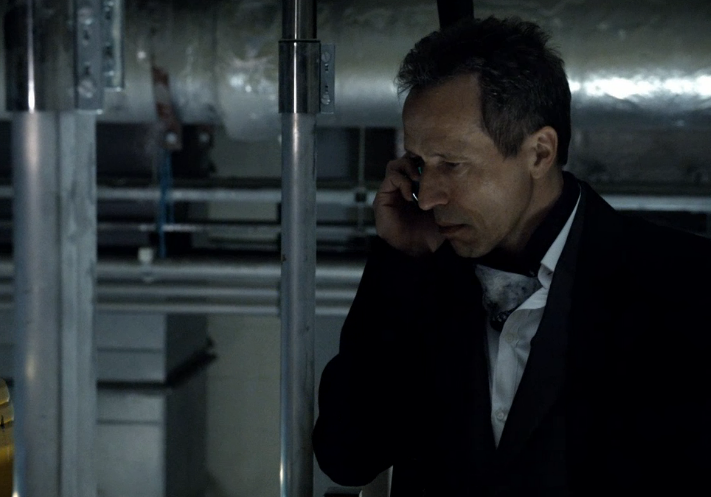 Adrian really is the Harvey Dent/Two-Face of this show. Benny Bratts is looking to Adrian for an escape out of the building — and the country — assuming it’s only a matter of time before this is linked back to him. Adrian says he’ll help, but only for a trade: the extremely powerful override device that Jack is bringing back to the CIA at that very moment.

And he’s not done. When Jack calls Chloe to ask her to come to the CIA headquarters, she tells him that she’s out, but that it was great to see him. And then she gets picked up by a car, driven by Adrian. He’s everywhere. And now that Margot is dead, he’s final boss.

Mini boss: Benny Bratts. But not for long, because his cover is unraveling like it’s stoppage ti—

(I don’t know why I’m doing this to myself. Because it still is the greatest hurt.)

Jack, now at the CIA office, is inching closer and closer to exposing Benny Bratts. As Jack starts to follow leads, Benny Bratts goes “we can take care of that here,” prompting this face: 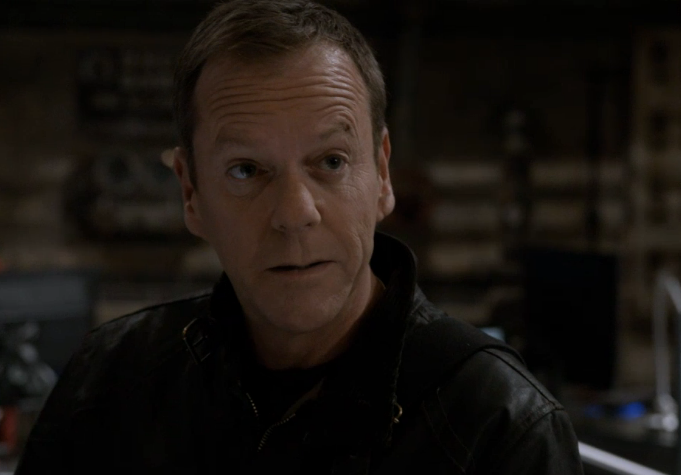 “Good, you have your man do it, I’ll have mine. We’ll see who gets it done first.”

Jack has to have a hunch about what’s up. He probably had Bratts pinned as a potential mole after seeing Catwoman.

So the information race is on, Bratts vs. Bauer. Jack is focused, Bratts is focused on Jack, and then Jack gets a call. 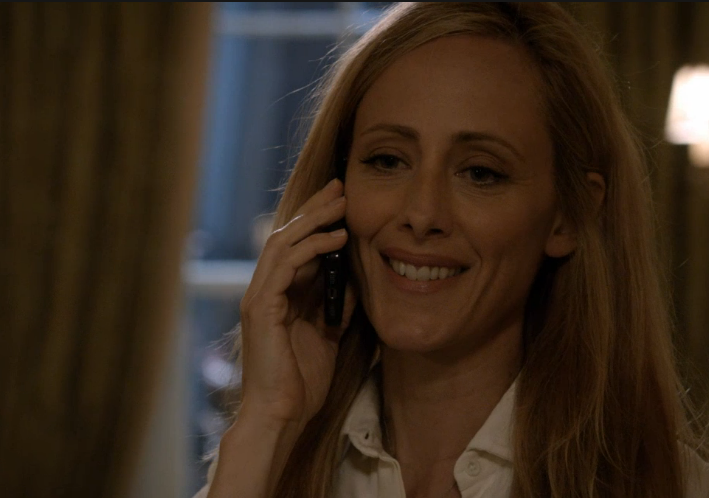 She’s the only thing that can make him drop his guard. So he leaves the room, which also means he leaves Bratt alone with New Analyst Who Will Soon Know Too Much and Probably Get Choked Out by Benny Bratts. 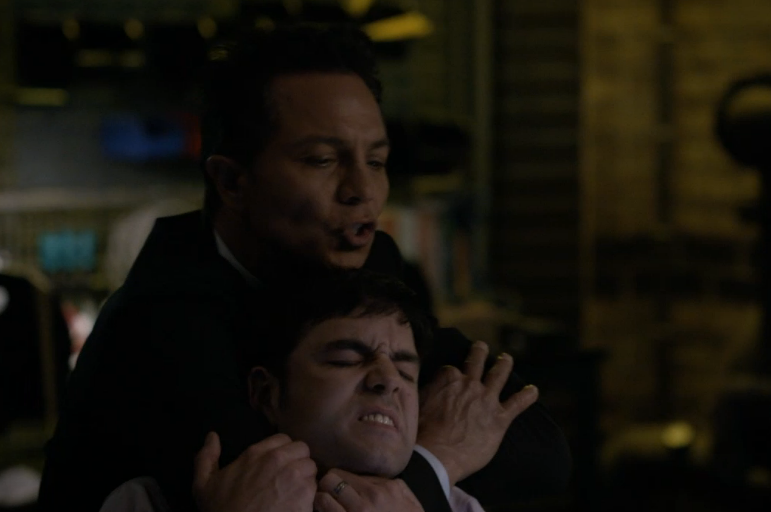 As the choke slam is happening, Bauer’s guy calls him back, identifies the hit man, and then begins reading off the names of people he was associated with. The fourth name: Steve Navarro.

So now it’s out. Benny Bratts is made. Which means Bauer has to find Bratts, who is on the run. 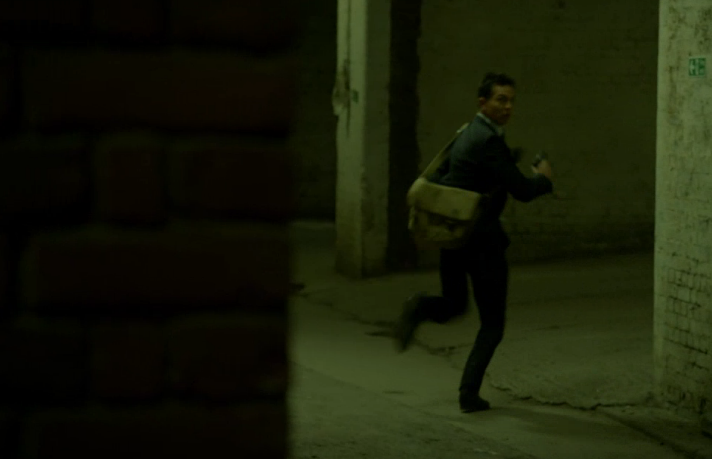 To Bratts’s credit, he’s very fast. Temporarily eluding Jack, he calls Adrian, who is smooching Chloe in the car. And they pick a meeting point to make the drop-off. And then it’s eight o’clock.