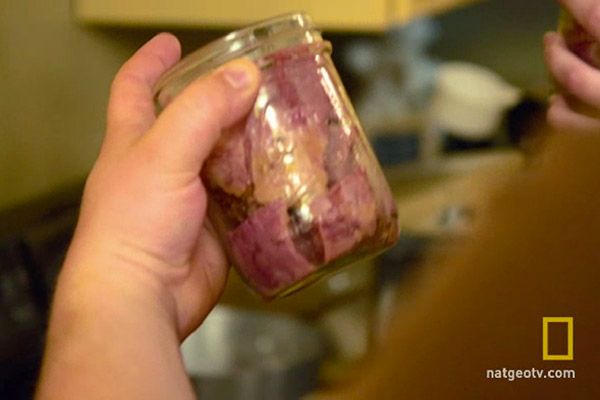 Why Are We Watching Him? He’s explaining the various ways he’s preparing himself and his family to survive an apocalyptic event — specifically, the activation of Middle Eastern terrorist sleeper cells in the U.S.

How Did He Get Here? “I’ve always loved films, and Red Dawn was a huge influence on my thought patterns of terrorists and terrorist attacks.” —Mike.

What’s the Grossest Thing We See? Mike and his family run a barbecue restaurant, where Mike has been smoking pork and preserving it in jars. Vegetables? Sure. But if you have to get through doomsday by eating meat that looks like medical specimens, won’t the living envy the dead?

What Have We Learned? One of Mike’s strategies for surviving terrorist occupation is to cozy up to this country’s enemies by supplying them with food from his restaurant, so I guess we’ve learned that Mike doesn’t know as much as he could about his future terrorist overlords and their probable dietary restrictions.

Who Is This Now? Ann.

Why Are We Watching Her? She has to clean out both units of her duplex, which she’s hoarded past usability, or risk losing it.

How Did She Get Here? According to Ann, she’s not a hoarder: “The inside of the house got away from me. The area itself shrunk, to be able to move around.”

What’s the Grossest Thing We See? Ann is not a young woman — I’d guess she’s in her late sixties or possibly her seventies — so it’s upsetting to see her living in an unsafe home without the basic necessities. For instance: running water. She describes her hygiene practice as “camp-style”: She fills an old plastic yogurt container with cold bottled water, dips a washcloth in it, and mops her face that way. But of course, no running water means no clean toilet. And judging by the dark brown crust in and on the toilet bowl, the water’s been off for a while.

What Have We Learned? A grandmother will buy “treats” to keep around the house for her grandchildren even if her house is so unlivable that those grandchildren haven’t been over to visit in more than a decade.

Who Is This Now? Julius.

Why Are We Watching Him? He’s telling us about his sexual attraction to balloons.

How Did He Get Here? When he was hospitalized at age 4, his mother brought him a balloon to comfort him. He’s been attracted to balloons ever since.

What Have We Learned? Julius has a wife who, though she declined to be filmed, reportedly accepts his addiction, so apparently there really is a lid for every pot.